MILLIONS are battling the cost of living crisis with little end in sight, but there are a number of big changes due to help soften the blow.

From tax cuts announced in Kwasi Kwarteng’s Mini Budget to direct cost of living payments, we list the key dates to look out for in 2022.

A number of major bill changes are adding flames to the cost of living crisis.

Energy costs will rise from £1,971 to £2,500 for a typical household on October 1 putting a further dent in household’s back pockets.

Inflation is at 9.9% and the Bank of England now expects it to peak at 11 per cent this October, compared to its earlier forecast of 13.3 per cent in August.

Interest rates hit 2.25% last week adding hundreds to the cost of standard variable rate mortgages and more rises are on the cards. 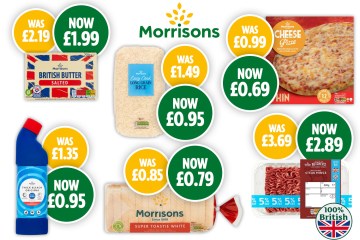 Here’s a full list of the changes ahead which could have a huge impact on your finances.

Budding buyers looking to bag a new home are already benefitting from a cut to stamp duty.

Stamp duty land tax (SDLT) is a lump sum payment you have to make when purchasing property over a certain threshold.

Previously, no stamp duty was paid on the first £125,000 of any property purchase.

But to kickstart a homebuying revolution, the Chancellor confirmed the threshold for paying stamp duty will shoot up to £250,000 from tonight.

First-time buyers will majorly benefit from the relief too.

Currently, first-time buyers pay no stamp duty on the first £300,000 of a property purchase, but this threshold will be increased to £425,000.

The government is also going to increase the value of the property on which first time buyers can claim relief from £500,000 to £625,000.

An increase to the thresholds at which you pay the tax could save some buyers thousands of pounds.

Over six million people with disabilities should receive £150 from by September 30.

This payment is to help those with disabilities pay for any energy intensive equipment they might have.

The payment will be made directly into their bank account and households won’t need to apply.

It won’t have any impact on existing benefit awards either.

You can get the cash if you claim one of the following:

Here’s a guide to everything you need to know about the payment.

Under new rules, thousands of claimants will need to have more meetings with work coaches and either increase their working hours or spend more time looking for a job.

Around 115,000 people on Universal Credit will be moved from the “light touch” work group to the “intensive work search” regime.

Something known as the Administration Earnings Threshold (AET) is a monthly amount that marks if you’re in one group or the other.

Those currently earning below £355 a month, or £567 for couples, are in the intensive work search group.

That includes people who earn nothing at all while on the benefit.

The amount will rise to £494 a month, or £782 for joint claims, taking thousands more people out of the light touch group and into the stricter work search group.

This new regime will come into effect from September 26.

The (BoE) is withdrawing the legal tender status of paper £20 and £50 banknotes after September 30.

That means after this date they will be no longer be valid for use in shops, supermarkets and other establishments.

But you don’t have to spend them – you can deposit them at your bank or in a Post Office over the next few weeks.

The paper notes are being taken out of circulation as they are easier to counterfeit and are less durable, compared to the newer polymer ones.

Councils have until September 30 to pay three million households a rebate to help with the spiralling cost of energy.

Since April, households living in council tax bands A-D have been entitled to a council tax rebate worth £150.

Councils are responsible for deciding who is eligible and also making the payments.

The money through this scheme is being paid out to help struggling households in the higher rated council tax bands.

If you want to work out what council area you live under, you can use the government’s tool.

You might still get the money credited to your council tax account, but that might mean a longer wait for the cash. We explain all here.

Those that received the first half of the £650 cost of living payment are set to receive the second chunk of cash in the Autumn.

The date for the second chunk worth £324 has yet to be confirmed.

However, those who later qualify for benefits may be eligible for the cash – even if they didn’t get the first payment.

The first half began landing in people’s bank accounts from July 14 which is worth £326. It should’ve arrived in most bank accounts by the end of July.

Those on the following benefits will get the help:

It’s important to know the payment is one per household meaning if two residents receive a benefit or UC payments, the money you receive will not increase.

Here we explain everything you need to know about the second instalment of the cost of living payment.

Millions of households are in line to get a £150 discount off their energy bills between December and March 2023.

You’ll be eligible for the automatic discount if you received any of the following benefits up to August 21 this year:

The Department for Work and Pensions, who’s overseeing the scheme, will send you letter in October to confirm if you’ll get the payment later on in the year.

Payments for the £150 Warm Home Discount scheme will likely begin from December.

If you’re unsure about who supplies your energy, you can find out through Find My Supplier.

In previous years the cash was split across four payments – giving customers a £37 discount off their bills each month from December to March.

The way in which you’ll be paid will be confirmed by your energy due course.

We’ve listed how the leading energy suppliers plan to pay households the discount and are waiting on others to respond.

The way you’ll be paid will depend on how you pay for your energy.

If you’re on a credit meter the discount will come off your bills, but if you’re on a prepayment meter you’ll get a voucher.

Check with your supplier to confirm how you’ll receive the cash.

In November, a £300 one-off “Pensioner Cost of Living Payment” will be paid out to eight million households.

You can check out if you are eligible for the winter fuel payment in our explainer.

Millions of households have been given a tax cut worth hundreds of pounds after the Chancellor reversed the National Insurance rate rise.

National Insurance increased by 1.25 percentage points in April this year, jumping from 12% to 13.25%.

The exact amount that you will save will depend on how much you earn.

Personal finance experts at Hargreaves Lansdown crunched the numbers for UK Times on how much different earners will save:

Ofgem has said it will continue to announce the cap on household energy prices, despite the Government saying it would guarantee lower bills for customers.

The next announcement is set for November 24.

The energy regulator plans to still make the announcements every three months, as it continues to regulate how much energy suppliers can charge for their services.

Prime Minister Liz Truss announced that the Government would guarantee that the average household will pay no more than £2,500 in its energy bills.

But the guarantee is a maximum price per unit of gas and electricity, so households that use more than the average will see their bills higher than that.

Christmas bonus for people on Universal Credit – this winter

To lend a helping hand over the festive period, Universal Credit claimants are now eligible for an extra £10 at Christmas.

Since the energy price cap has been announced, the small bonus might prove more useful than you’d think.

It’s an entirely separate payment from any benefits you receive and you won’t need to pay it back.

It’s to land in bank accounts before Christmas, although an exact date is still to be revealed.

However, you’ll need to be claiming an extra benefit alongside Universal Credit in order to be eligible – to be received during what’s known as the qualifying week, which is usually the first week of December.

Here’s a full list of benefits you have to be claiming in order to claim the bonus.

Over 150,000 on benefits will face tougher rules if they do not work enough hours from January.

People on Universal Credit working the equivalent of 12 hours or less are expected to meet regularly with a work coach and take “active steps” to boost their pay.

But that will rise to 15 hours a week at the National Living Wage.

Working fewer than these hours a week, means you’re expected to go to the job centre and meet with work coaches to increase your earnings.

The change is expected to bring around 120,000 more people into the intensive work search regime.

THOUSANDS of Christmas dinners in a tin will...
News

A MILLWALL fan dubbed “The Lion of London...
TV

CRYSTAL PALACE chiefs are to have an American summit...

THOUSANDS of Christmas dinners in a tin will...
News

A MILLWALL fan dubbed “The Lion of London...
TV

CRYSTAL PALACE chiefs are to have an American summit...
News

EX-Brexit Secretary Steve Barclay was adamant. There is...

THOUSANDS of Christmas dinners in a tin will hit shelves this week after it cooked up a storm last year. The £2 soup —...
Read more

A MILLWALL fan dubbed “The Lion of London Bridge” has written a book on how he took on armed jihadis. Roy Larner, 52, was...
Read more