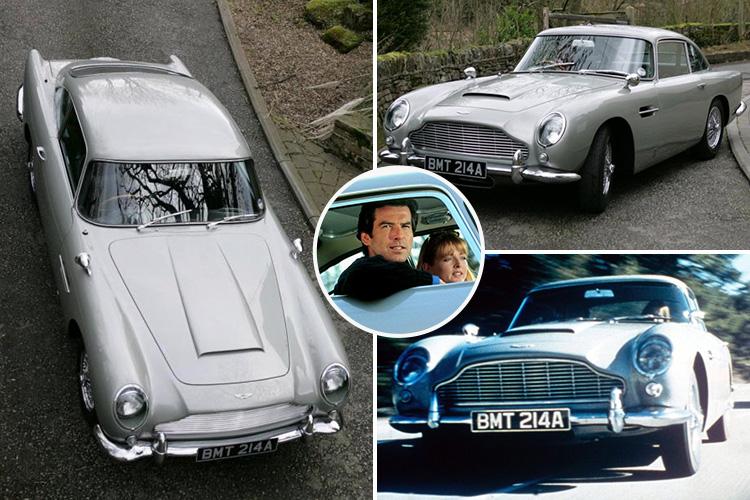 THE Aston Martin DB5 driven by James Bond in GoldenEye is set to go under the hammer for a whopping £1.6 million.

And it will become the most expensive DB5 in the world if it fetches that price.

And its current owner, entrepreneur Max Reid, is now set to make a tenfold profit if it reaches the enormous valuation given by the auction house.

While playing 007, Brosnan raced the classic British sports car around the Monaco hills with Xenia Onatopp, the Ferrari-driving assassin played by Famke Janssen.

The film marked the first time a James Bond actor had driven an Aston Martin DB5 since Sean Connery played the spy in the mid-1960s.

After filming, the 1965 Aston Martin was used by Eon Productions for promoting GoldenEye and the Aston Martin DB7, before being sold in 2001.

James Bond and the Aston Martin DB5 have been linked since Sean Connery drove one in Goldfinger, in 1964 – a replica of that car went up for sale earlier this month for £1million.

The Brosnan DB5 will be on display at Bonhams’ Aston Martin Sale at Englefield House on June 2 ahead of its sale at Goodwood in July.

Sholto Gilbertson, Motor Car Department director at Bonhams, said: “The DB5 is one of the most recognisable and desirable British classic cars in the world – add in the fact that is was actually driven by ‘Bond’ and you’ve got something seriously exciting.

“Every Bond fan remembers Pierce Brosnan tearing through the hills above Monaco, racing Xenia Onatopp’s Ferrari, and it must up there as one of the most thrilling Bond car chases in history.

“This car is something very special indeed – it was rightly the most valuable piece of Bond memorabilia ever sold when it was purchased in 2001 – and we are delighted to be offering it at our Festival of Speed Sale in July.”

The 1965 sports car will feature at the Bonhams’ Goodwood Festival of Speed sale on July 13.