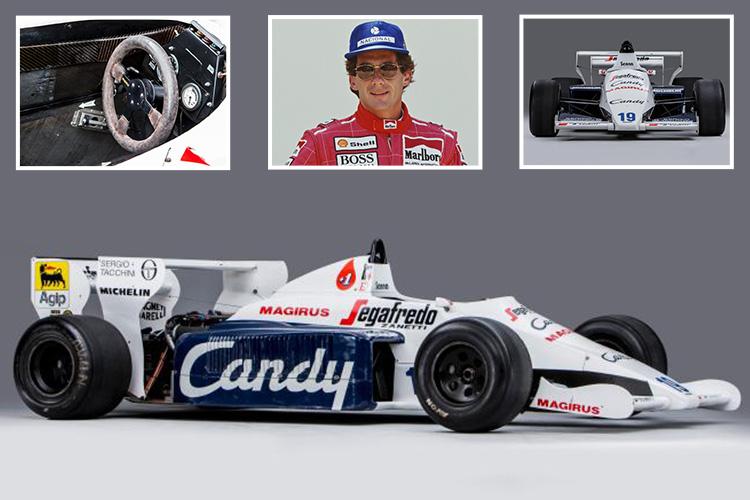 AYRTON SENNA’s first ever F1 car is heading to auction.

The 1984 racer was driven by the late, great Brazilian on his debut season and scored his first podium at the Monaco Grand Prix debut.

The race sparked his rivalry with Alain Prost as Senna wrestled the unfancied Toleman-Hart TG184 to near-victory against the much faster McLaren on the rain-soaked streets.

The 1.5-litre, 600bhp racer last sold for £1million and it’s expected to fetch even more at the Bonhams auction.

Many racing experts pin the start of Senna’s legacy on his Monaco debut in this Toleman.

The race was cut short due to appalling conditions as the mercurial Brazilian hunted down his French foe.

With Senna just a handful of seconds behind, the race was red-flagged handing victory to Prost.

A few laps more and Senna would’ve passed the McLaren ace but perhaps it was for the best.

Race mechanics said the Toleman was just minutes away from retiring thanks to suspension damage.

BBC commentator and 1976 world champion James Hunt said at the time: “I think we are watching the arrival of Ayrton Senna as a truly outstanding talent in Grand Prix racing…”

The Brazilian also triumped at Monaco six times in his career that was tragically cut short in a horrific Imola crash in 1994.

The unfancied Toleman-Hart went on to claim two more podiums in the 1984 season in Britain and Portugal at the hands of Senna.

Mark Osborne, global head of motorsport at Bonhams, said: “The Senna-Prost joust of the late 1980s and early 1990s was one of the greatest sporting rivalries of all time, with two great champions providing F1 fans with some of the most eye-popping and spectacular racing ever witnessed.

“The spark that ignited this fierce competition can be traced back almost thirty-five years to the 1984 edition of the Monaco Grand Prix, and the politically charged decision to throw out the red flag when it was clear that the young Brazilian charger was about ruffle some feathers.

“We at Bonhams are delighted to present the very car – the 1984 Toleman-Hart TG184 – that triggered this great rivalry, and which provided the opening chapter for Ayrton Senna’s remarkable and record-breaking story at the Monaco Grand Prix.”

The car will be auctioned at Bonhams’ Moonaco sale on May 11.