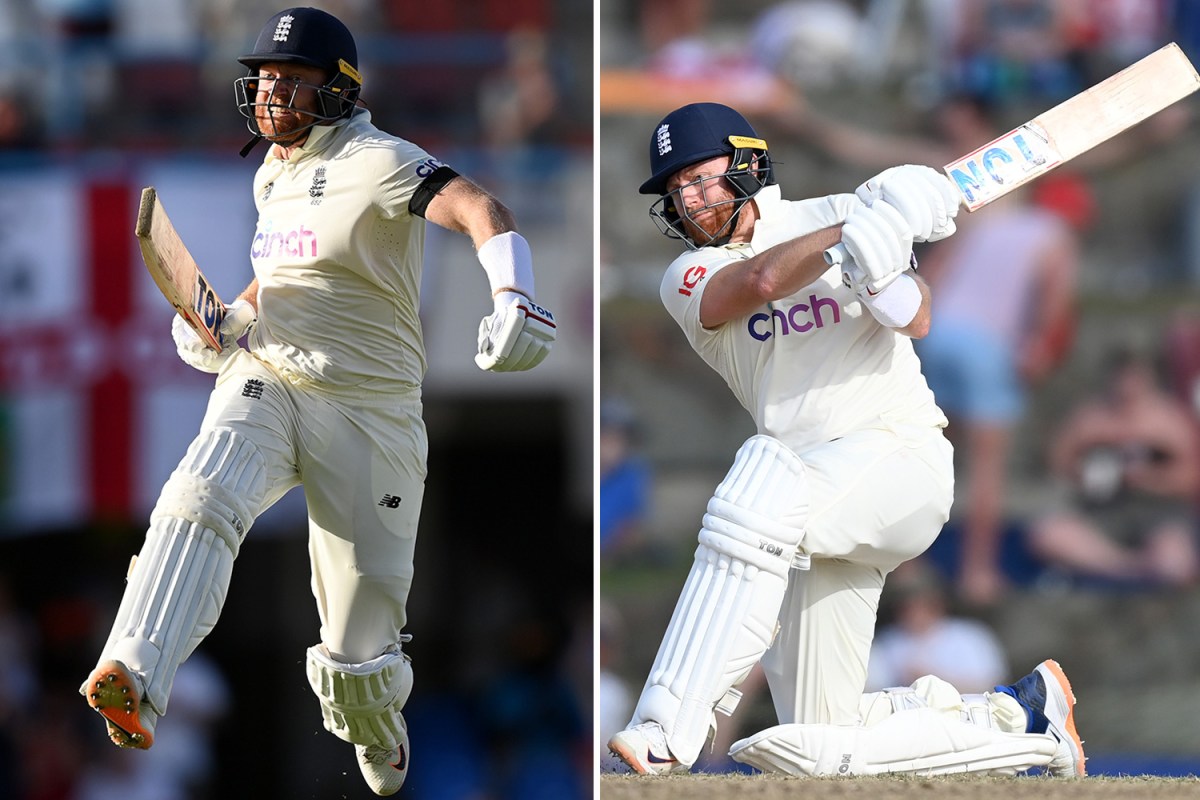 JONNY Bairstow continued where he left off in Australia to spare England’s Antigua blushes.

And after another top order collapse, brilliant Bairstow’s smile lit up North Sound as he swept Kraigg Brathwaite to the fence to complete a superb eighth Test century and ensure the “red ball reset” was not simply a painful rewind.

Bairstow struck 17 fours in a five hour stay, mixing durability with a determination to put the bad ball away, rightly celebrating with a leap and roar of delight and jab of his bat as he clocked up three figures before closing on an unbeaten 109.

With the recalled Ben Foakes also getting his head down with a solid 42 before being pinned in front by the excellent Jason Holder, the pair salvaged England from a perilous 115 for five to finish the day on 268 for six.

Bairstow’s joy at his first century versus the West Indies was justified, especially as his previous nine Tests against them brought just 197 runs at an average of barely 15.

But with Sir Viv Richards looking on in the ground that bears his name, Bairstow demonstrated more solid attributes, initially conservative but finally blossoming with timing, power and confidence.

It transformed what could have been a position of demoralising disarray into one where England will look to end a run of 12 innings without passing 300 and put the heat on the Windies.

That was much needed too, after England’s lunch had gone down like a week-old pizza.

While Root won the toss and elected to bat, England – with six changes from the side demolished in Hobart – were swiftly back in the bad old routine.

Poor shots, poor judgement and a lack of patience resurrected that enduring sense of despair for the frontline troops of the Barmy Army.

The surface offered some sideways movement but no more than standard deviation for the new ball but the top order technique was once again found deficient.

Root has frequently been the one beacon of hope. This time he was just part of the distress signal.

Alex Lees lasted just nine balls on his debut, trapped only half forward for just four after being craftily set up for the Kemar Roach inswinger.

In the next, Zak Crawley, who had cracked two away off Jayden Seales’ opening over, wafted airily at a wide ball, although keeper Joshua Da Silva reacted smartly to pouch the inside edge.

And when Root also departed, his off bail trimmed by an in-ducker he wrongly left – third time lucky for Roach after a play and miss and then a third slip drop from the two previous balls – England were staring into the abyss once more.

It soon got worse. Dan Lawrence lasted an hour before he prodded at the disciplined Holder, straight to Jermaine Blackwood for 20.

That brought Bairstow out to join Ben Stokes, who cautiously and then more aggressively added 67 either side of lunch.

But when Stokes perished for 36 to a big inside edge off Seales, just as he started to unleash his attacking armoury, England were back in trouble.

It was looking well below par on a pitch that had flattened out and slowed down, evidenced as Foakes crunched two straight drives back past Roach.

The pair started to go through the gears in the final session, Bairstow bringing up his 50 by square-cutting left-armer Veerasammy Permaul to the fence for his eighth boundary.

Foakes, back in the side for the first time in 12 months, showed similar intent, latching on to anything short and whipping through mid-wicket.

Bairstow successfully reviewed when adjudged caught behind off Permaul – he was nowhere near it – but Foakes was not as fortunate when Holder trapped him on the knee-roll one run short of a century stand.

Chris Woakes, though, gave Bairstow company through to his landmark in an unbroken 50 partnership as England shaded the opening day.