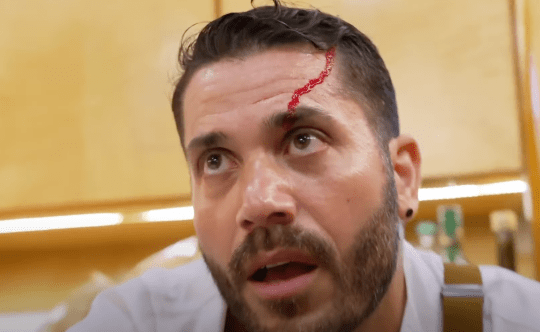 The critically-acclaimed cook was working hard to satisfy the guests onboard – but things soon took a turn for the worse.

While preparing dishes, he hit his head with force while coming out of the fridge beneath the crew quarters, slicing a part of his scalp off in the process.

Daisy Kelliher quickly ran to get Colin MacRae’s help as he made his way into the crew mess, covered in blood – and holding a piece of his scalp in his hands.

“He’s taken the f**king top of his f**king scalp off,” Colin said as the chief stewardess got a medical kit.

Despite Marcos insisting that it’s “not that bad”, a worried Captain Glenn Shephard shared his fears for his colleague.

He told the camera: “My first thought is that this is the end of the season for Marcos – it’s that serious.”

Thankfully, a doctor came on board and bandaged Marcos back up, explaining that it was just a superficial wound.

Chatting to fans on Twitter after the episode aired this week, he informed them that it took a “few weeks” for his head to heal, but his hair later grew back.

Below Deck Sailing Yacht is available to stream on hayu now.