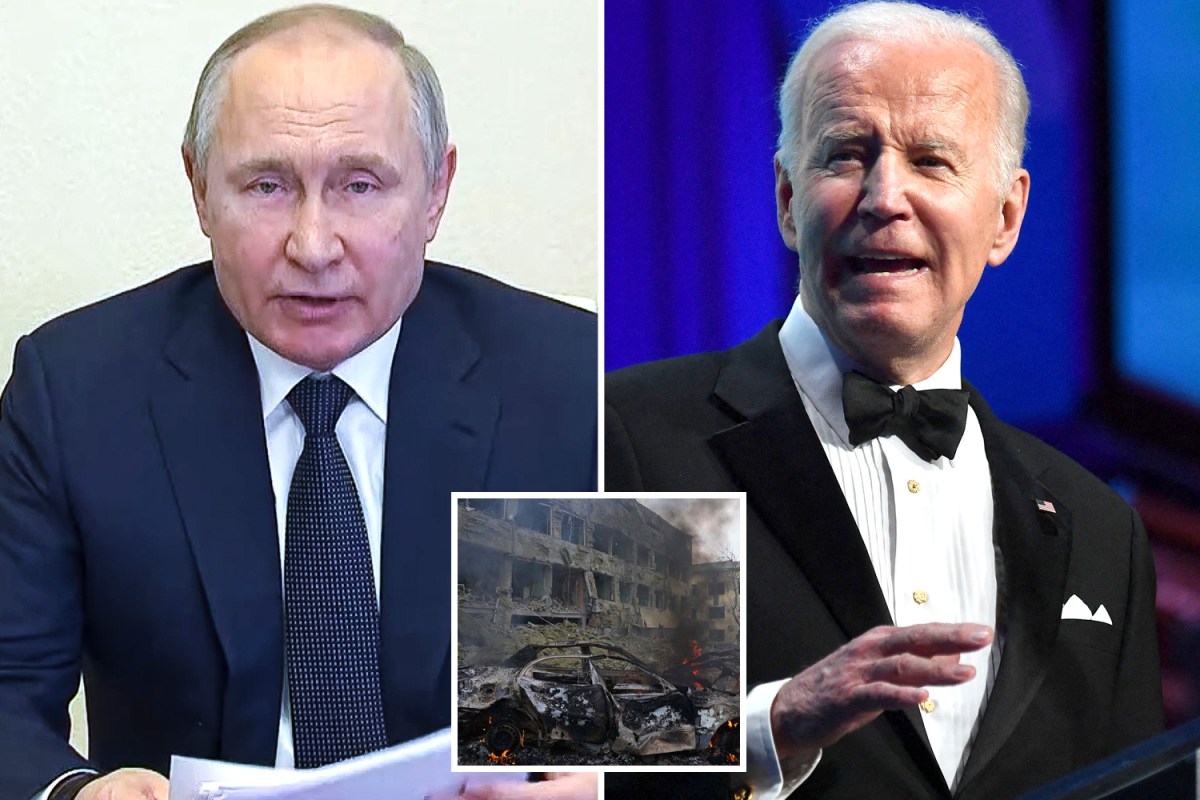 The US president’s sharp rebuke came after Ukraine’s leader Volodymyr Zelensky made a desperate plea to US Congress for help to fight Russia’s invading army.

Biden pledged: “We’re going to give Ukraine the arms to fight and defend themselves through all the difficult days ahead.”

And referring to Putin, he told reporters: “I think he is a war criminal.”

The Kremlin punched back and condemned Biden’s comment as “unacceptable rhetoric”.

Kremlin spokesman Dmitry Peskov said: “We consider unacceptable and unforgivable such rhetoric of the head of state, whose bombs killed hundreds of thousands of people around the world.” 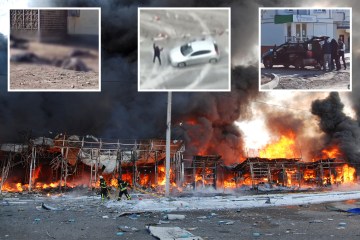 In a virtual address to Congress, Zelensky referenced Pearl Harbor, the 9/11 attacks and Martin Luther King Jr as he showed lawmakers footage of the devastating impact of three weeks of Russian bombardment.

Zelensky asked Washington and its NATO allies to impose a no-fly zone to ensure “Russia wouldn’t be able to terrorise our free cities”.

Biden and Nato have resisted Zelensky’s pleas for direct involvement against Russia – warning it could lead to World War Three.

But Biden today unveiled his latest package of aid to Ukraine to add to the £10.3billion in military and humanitarian aid already approved.

The US said they would provide long-range missile defense and Switchblade armed drones, which will allow Kyiv’s forces to better defend against Russian aircraft from a distance.

According to a military source, the systems are the Russian-made S-300 -a fully automated, ground-based radar-and-missile launcher unit that can detect, track and fire at multiple aerial threats at long distances.

Ukrainians already know how to operate the S-300, and the US and a number of Nato countries have the systems or components to supply Ukraine.

Washington will also send Ukraine 100 Switchblade drones – essentially camera-equipped, remote-controlled flying bombs that can be directed by an operator to find and plunge onto a target, exploding on contact.

Dubbed “kamikaze drones”, Switchblades can extend the range of attack on Russian vehicles and units to beyond the sight of the user.

The US is also giving Ukraine 800 more Stingers, which are shoulder-mounted infrared anti-aircraft missiles.

It also includes 20 million rounds of small arms ammunition fitting both Russian and Nato standards, and 25,000 sets of body armour and helmets.

Western allies have already provided the Ukrainian army with around 17,000 lightweight, shoulder-launched self-guided missiles which have become the weapon of choice in the ground war.

It comes as Putin insisted the invasion was “developing successfully” and said “we will not allow Ukraine to serve as a springboard for aggressive actions against Russia”.

In his speech Putin claimed Western leaders gave him “no option to resolve the process in a peaceful way”.

Russian Foreign Minister Sergey Lavrov said: “The negotiations are difficult for obvious reasons but nonetheless there is a certain hope for reaching a compromise.”

Zelensky also sounded hopeful. He said: “The meetings are ongoing, as I am told the positions are sounding more realistic.”

He stressed the need for the talks to continue but vowed not to cave in to Russian pressure.

The president added: “We need more time to achieve decisions that serve the interests of Ukraine.”

The issues being debated include Ukraine’s desire to join Nato, which was one of the main drivers behind Putin’s decision to invade.

President Zelensky has appeared to soften his position on joining the alliance.

He added: “Of course, we would like it all to happen much faster. This is such a sincere desire of the Russian side. We want to come to peace as soon as possible.”

But as the talks continued, so did Russia’s brutal bombardment of Ukrainian cities.

Scores were feared to have died in an airstrike on the Mariupol Drama Theatre.

The venue had been used as a central gathering point, with meals   provided and people sleeping overnight as the south-eastern port city endured its third week of bombardment.

A video from five days ago showed every area of it packed with people and reports suggested 1,200 could be sheltering in there.

Rescuers were searching for survivors but the number of casualties was not known.

Shocking drone footage showed the utter devastation in the besieged city where 2,500 people have died and 250,000 remain trapped without power or water.

Huge plumes of black smoke darkened the skies as dozens of vast apartment blocks were ablaze.

Others reported seeing 22 aircraft dropping 100 bombs in just one day.

A 12-storey residential building near central Kyiv was hit by Russian shelling, triggering a series of fires.

And two people died when an apartment block was shelled in Kharkiv, Ukraine’s second city.

But Russia has had to resort to recruiting mercenaries and private contractors because it has suffered such a high loss of troops, according to the UK Ministry of Defence.

The MoD said Putin was also redeploying forces from as far away as “its Eastern Military District, Pacific Fleet and Armenia”.