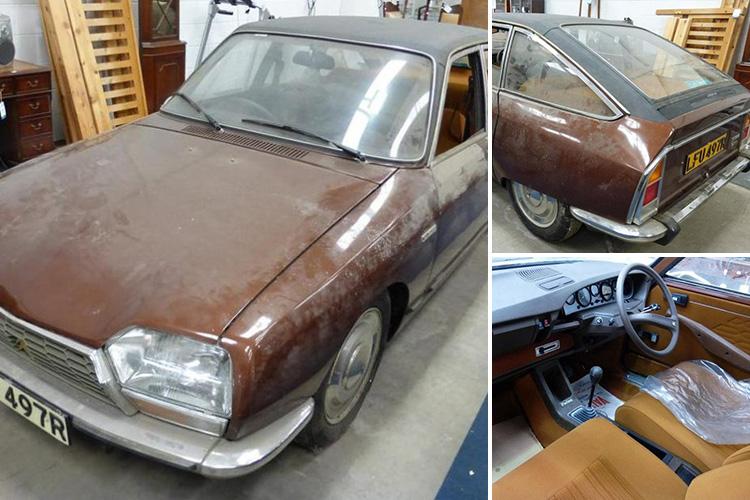 A BRAND new hatchback from the mid 1970s has emerged for sale having not been driven for more than four decades.

And the car is even being sold with its original tax disk, which expired nearly 41 years ago in July 1977 – and could be worth a few hundred pounds alone.

Despite its age, the 1976 Citroen GS Pallas TC is in factory condition and also comes with the original plastic seat covers.

The brown hatchback was bought as an investment by a mechanic who then placed it in a lock-up garage and left it there for the next 42 years.

His family recently made the discovery following the owner’s death.

Despite being incredibly dusty and covered in cobwebs the old motor has been perfectly preserved in a dark unit in Epworth, Lincolnshire.

The Citroen was one of thousands of GS cars built by the French marque throughout the 1970s.

They were among the most popular family cars of the era and now sell for anywhere up to £4,000.

Powered by a 1.2-litre petrol engine, the four-door hatch has just 78 miles on the clock and is in total working order.

Robert Horner, of Eddisons CJM Auctions, said: “This really is a quite amazing find – almost like a time warp.

“It was bought by a motor mechanic back in 1976 after his accountant advised him to spend some money rather than having it lying around doing nothing.

“He bought a car, like most of us would buy a wardrobe, and then just locked it up in a garage.

“I don’t think he meant to keep it for so long, he just never went back to sell it.

“The interior was pretty much as it would have been all those years ago and there’s no rust at all on the bodywork.”

The car will go under the hammer tomorrow with Eddisons CJM Auctions for a pre-sale estimate of £4,000.