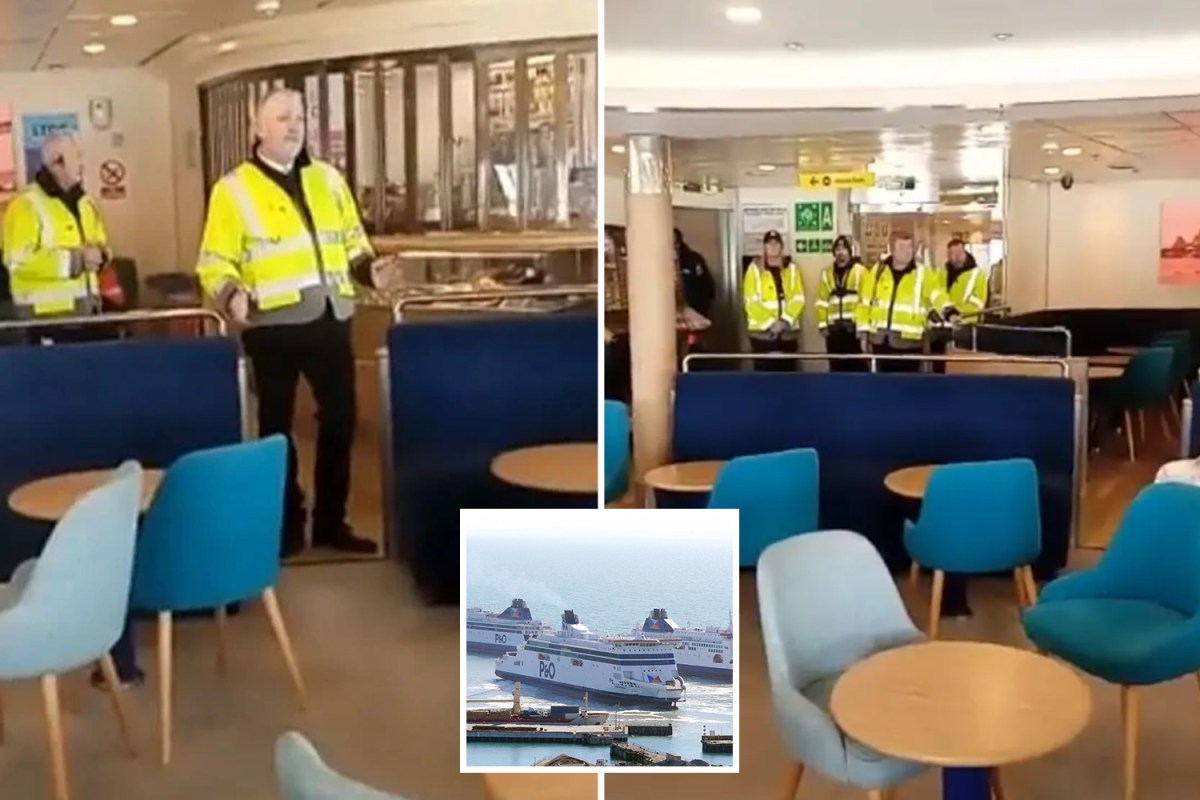 THIS is the brutal moment security told P&O crews they have “two hours” to pack up their things and get off the ferry.

In a virtual speech a company chief yesterday told workers their contracts were terminated immediately following losses of more than £100 million.

The pre-recorded video, which started at 11.10am yesterday morning, lasted less than four minutes and saw all staff told they were losing their jobs.

The 800 workers were sacked immediately, with no notice, so they can be replaced by cheaper labour.

Now another video, showing the cruel moment workers were told to get off a boat with no notice, has appeared on social media.

In the video security men in high-vis vests are seen speaking to the sacked seafarers with no sign of sympathy.

One of the men says: “I think two hours would be a reasonable time for you to pack your stuff up and be ready to leave.”

The stunned workers sit in silence before replying: “We need to talk to the union.”

The security then says: “That’s fine but you’ve got two hours.”

Another shocked P&O worker then asks: “What happens after those two hours? Are you going to start dragging us off?”

Bosses claimed they need to hire the cheaper workers instead to plug a £100million black hole in the business.

They dramatically halted all services early on Thursday before the 11am firing bombshell.

And ferry ports were later plunged into chaos as passengers, workers and lorry drivers had nowhere to go.

One lorry driver trying to enter the port began shouting and beeping at those in the road, before being told: “We’re not moving.”

Passengers were booted off and told to await instructions amid claims they would continue journeys with DFDS and Irish Ferries.

And Huw Merriman, who chairs the Transport Select Committee, said: “P&O, this once-great flag carrier of the seas, have made an appalling error.”

One van driver stuck in Calais, where there was also disruption, described the scenes as an “absolute nightmare” with “no information”.

Another couple said they were left “high and dry” after their trip was cancelled.

As well as running passenger services, PNO is a major freight carrier on the Dover to Calais route.

This handles a third of the goods trade between Britain and the EU, including large amounts of food.

Among the abandoned were kind-hearted Brits, unable to transport aid to Ukraine as they were forced to divert their loads.