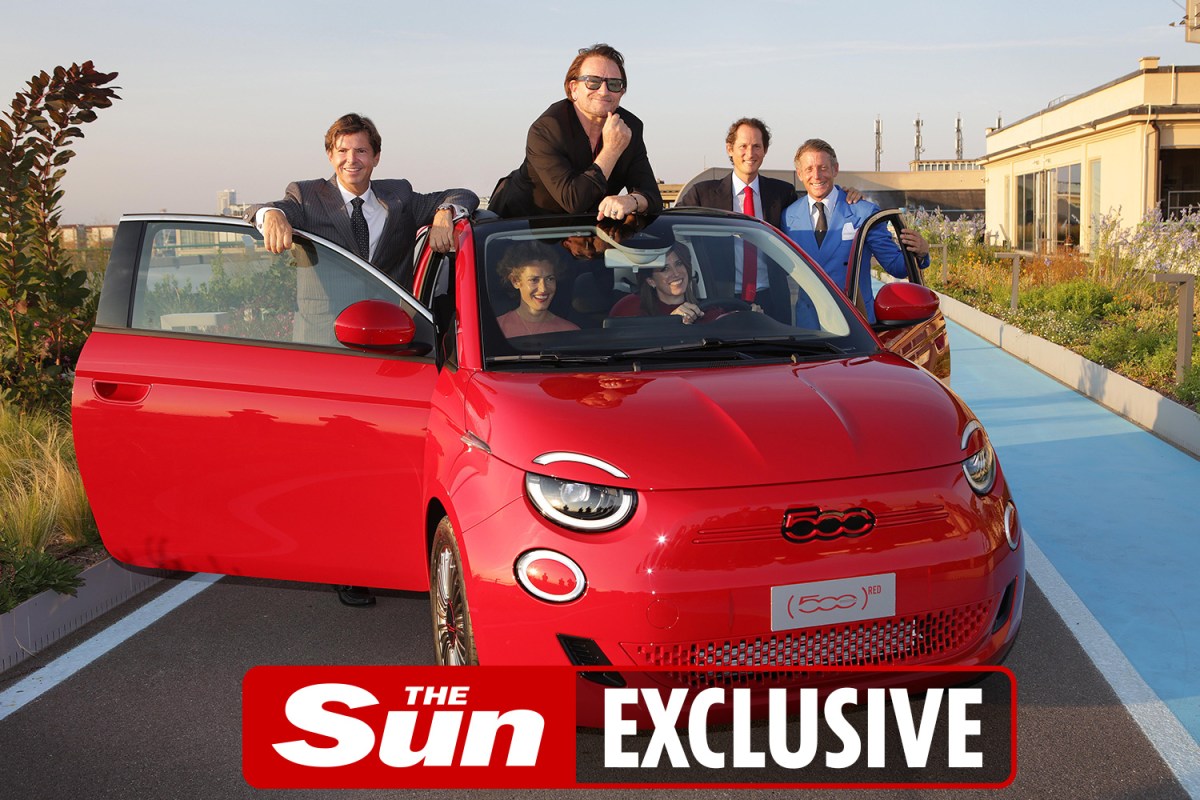 THIS guy needs no introduction – and neither does the car he’s standing in.

They are global icons that can make knicker elastic ping from a thousand paces.

Now you are probably expecting the usual marketing flimflam here: Pay a celebrity squillions to say nice things about a product.

But this is different.

Bono’s tie-up with Fiat and the pure electric Fiat 500e has real meaning. And it will help save lives.

The deal is as follows: Bono’s RED foundation will receive $4million from Fiat and sister firms Jeep and RAM Trucks over the next three years, as they roll out special-edition cars highlighting RED’s fight against Aids and Covid.

The first car to get the RED treatment is the £25k 500e. It has a red driver’s seat (the others are black) and a red accelerator pedal, as suggested by Bono, “to help accelerate” change.

Now let’s hear from the man himself.

Bono said: “I’m not just here to sell a remarkable red car. I’m here to sell an idea that, unless this pandemic is defeated everywhere, no one is safe anywhere.

“And we need the help of you as a storyteller to get this story out.

“Because I’m not sure it’s clear that people realise that it’s not an act of charity to get vaccines to people who live on the other side of the world. It’s enlightened self-interest.

“We’re the pandemic people, we’re the global health fire brigade. Bobby (Shriver) and I started RED 15 years ago to fight HIV/Aids. We thought there was something upsetting that an accident of geography, that where you live, would decide whether you lived.

Unless this pandemic is defeated everywhere, no one is safe anywhere.

“And 15 years later, we’re still fighting that pandemic and this other little virus, Covid-19. I’m not kissing the Fiat ass here. This partnership is a powerful shot in the arm for RED’s fight against pandemics and the complacency that fuels them.

“You have this iconic company determined now, committed now, to help drive this pandemic off the planet. And with this car they won’t even need petrol to do it. You’re sort of going green on the way to going RED. It’s cool.”

Bono was speaking at Fiat’s famous old Lingotto factory in Turin. The one with the rooftop test track. It is now home to Europe’s highest hanging garden. Another project by Fiat to “protect the planet and its people”.

As well as launching the first RED special edition, the U2 frontman revealed his lifelong passion for Fiat.

He said: “I want you to know, and this is not a professional compliment, I love this company. My father drove a Fiat. My first car was a Fiat. I crashed it, I totalled it, actually. My next car will be this Fiat. I love the stories, I love the history of this great company.”

Now Bono and Fiat can make history together.

ALL cars and bikes have a face, I think. Most people see headlights and grilles and think nothing of it. Some of us see something staring back at us when we gawp.

BMW cars currently look like buck- toothed weirdos, a new Triumph Speed Triple frowns at me like it hasn’t been ridden far enough and this new Suzuki GSX-S 1000GT reminds me of a mad scientist squinting down a microscope.

It’s a GT bike in the classic sense. An upright riding position, with a screen that works to push wind around you rather than through you. Panniers that will hold two full-face helmets allow you and your passenger to pack plenty in for a long distance trip, or lots of shopping if you are staying local.

KYB suspension and Brembo brakes will keep you out of trouble in style and you’ll be able to tell exactly what’s going on thanks to a handy-looking 6.5in TFT screen.

Of course, there are riding modes and various levels of traction control to choose from, which will undoubtedly make your ride a safer one.

Rubber-mounted pegs and bars minimise vibrations and the cruise control will help you bash out the boring motorway stretches. A lot of thought has gone into offering exactly the right amount of tech and practicality here. It’s clever stuff.

The design language will date very quickly, in my opinion. It’ll likely be a bike that will find a loyal following because of what is going on under the fairing panels rather than how it looks.

I love the fact Suzuki has been so bold with the styling, though. It’s on a bit of a roll, with the retro V-Strom and now this.

You can see the bike at Motorcycle Live later this year . . . and you will pull the same surprised face I did when you notice the £11,599 price tag.

If you want cheap, buy a budgie. If you want value for money, you buy a Suzuki.

THE film crew call it Donut Square, a cobbled landmark in the centre of the southern Italian town of Matera.

These are the guys who handle the stunning action sequences, the unsung heroes of this blockbuster film.

The producers spent the best part of a year persuading the local government that Bond wouldn’t trash the place, so every millimetre counts.

The crew are the best in the business, paid to anticipate problems or eliminate any that sneak through. And right now there is one: Those pretty stone streets are proving very slippery.

Lead stunt co-ordinator Lee Morrison figured out that soaking a tricky surface with a well-known soft drink generated the necessary grip while he was doubling for Matt Damon during a rooftop bike chase in The Bourne Ultimatum.

“Rooftop riding is slippery. A foot chase in a hospital is difficult, too. And American shopping malls,” he explains.

The fizzy pop works a treat, and the chases you’ll see in this 25th instalment in the world’s most successful film franchise are some of the toughest Bond has ever got himself mixed up in.

And while most of the driving is done by former British rally champ Mark Higgins, it really is Daniel Craig behind the wheel powersliding round Donut Square. I also got to watch the team in action deep in the Scottish Highlands, pummelling an entire fleet of Range Rover Sports and Land Rover Defenders.

“That was probably the most difficult car chase I’ve ever worked on,” Morrison says of a sequence that sees Bond on an emotionally charged mercy dash.

The chase is actually set in Norway and involves a major secret, but I can’t give any more away than that. Or else I’ll have MI6 and the Bond producers coming after me.

Q) MY 2005 Hyundai Tucson CRDi with 70,000 miles on the clock is excellent but I’ve got an intermittent problem with the immobiliser which can prevent it starting. Any ideas how to fix this?

A) There is plenty of chat about immobiliser problems on Tucsons of that age. The consensus is it could be one of a few things – your ignition key (which you mentioned) included.

Take it round to a decent auto-electrician who ought to be able to diagnose and sort the fault, probably for about 150 notes. Bit of a hit in the skyrocket, yes, but for peace of mind the car will start every time, worth it.

Q) MY grandson is selling his 14-plate Audi A5 2.0 TDI Black Edition auto, with 88,000 miles on the clock. It’s got a Bang & Olufsen sound system, heated front seats, dual-zone climate control, front and rear parking sensors, and much more. He wants £12,000 but I think he is asking too much. Can you give us a realistic price?

A) No, I reckon your whippersnapper has got that valuation bang-on, Alan. Twelve bags is bottom dollar for 2014 Black Edition A5s with higher five-figure mileages. He should easily achieve what he wants if he sticks it on for £12,750 and is ready to haggle.

Q) I HAVE a 1995 Mitsubishi FTO in yellow. Just 200-odd this colour were made as a limited edition. I have SORNed it because it failed its MOT and needs a few thousand spending on it. Is it worth me splashing out to make it more valuable?

A) Tough one, Ricky. I’ve got a soft spot for FTOs but their values are not yet exploding like some contemporaries, such as the Honda Integra Type R. Any FTO is a rare sight, especially yellow.

Top money at the moment is £4,500 to £5,000. If you feel brave, you could spend to get it tip-top then hold on to it for another three years. Its value might just go the right way to offset the cost.

Reader’s car of the week

He tells me: “The Jensen Interceptor Mk3 was my dream car in my twenties. It has just joined me and I’m in my 70th year.

“The Jensen sits alongside my 2000 Bentley Arnage. Both are fantastic to drive but I’ll let you decide which one of them to feature.”

Fiat unveil the first look at their 500e “la Prima