Latest UK NewsThe latest breaking news from the UK
Home Motors Buying Motors Can you guess how much this humble 1950s Citroen 2CV is worth...
Facebook
Twitter
Pinterest
WhatsApp 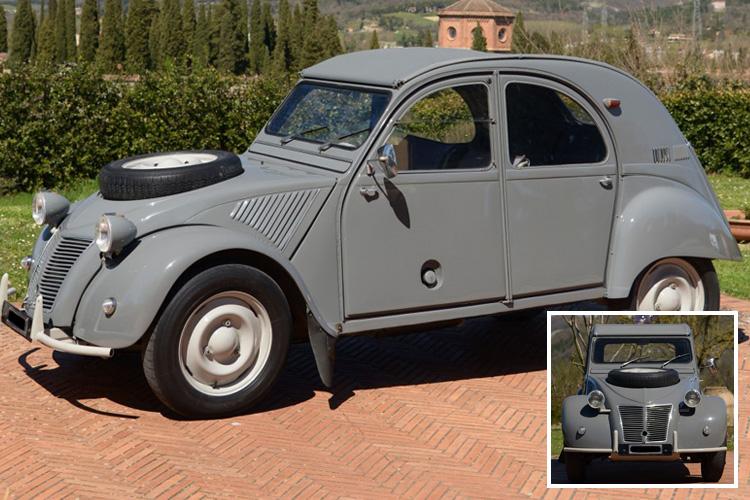 THE humble Citroen 2CV pretty much sums up cheap, basic motoring – until now.

This rare model has emerged for sale priced at an eye-watering £110,000.

And experts believe less than 100 survived with just 30 in usable, running condition.

That makes it one of the rarest cars around and likely to fetch the incredible sum at auction.

The one for sale has a dark grey body, a spare wheel mounted on the bonnet and a full-length retractable sunroof.

Inside there is a spacious but basic interior which includes four grey and white striped seats and a white steering wheel.

The classic economy car was incredibly pioneering when it was first released, mainly thanks to it being powered by two 12bhp engines.

One engine sent power to the front wheels while the other was responsible for the rear.

It was a ground-breaking and innovative piece of design for the late 1950s, and with both engines running the quirky Citroen could reach a top speed of 65mph.

The car was originally built with the intention of conquering the difficult terrain and climate in France’s North African colonies.

At the time the car, which hardly had any luggage space because of the extra engine, cost about £715 (9,830 Francs), double the price of a standard 2CV.

In 1962, following Algeria’s independence, Citroen dropped the ‘Sahara’ name and the car became the ‘2CV 4×4’.

Philip Kantor, of auctioneers Bonhams which is selling the 2CV, said: “These cars are still very popular, partly due to their rarity.

“The 2CV celebrates its 70th birthday this year, and this rare special edition would make the perfect addition to an enthusiasts fleet.

“There are thought to be fewer than 100 still around today, about 30 of which are in usable, running condition. This one is in fantastic condition and it was comprehensively restored in 2015.

“It is a rare and unusual model to come to auction, and makes an interesting addition to our sale.

“We hope that it finds a new owner to continue its adventures.”

The sale takes place on May 11 in Monaco.