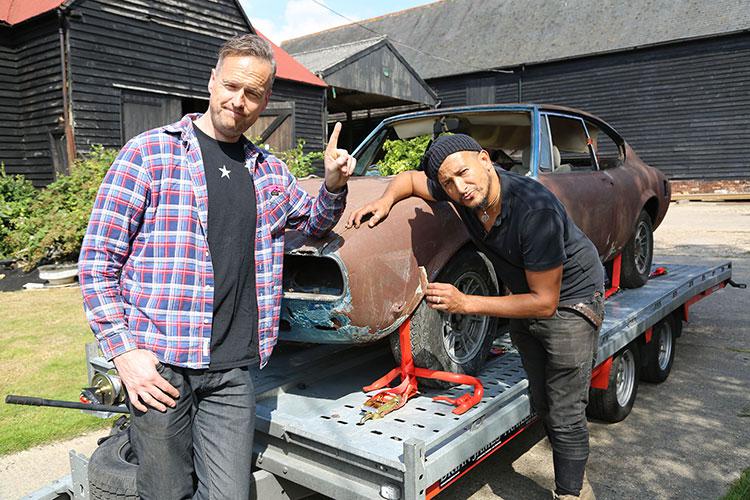 HE’S got one of the oddest jobs out there.

Car SOS presenter Tim Shaw is a self confessed “out and out petrol head” who enjoys making “dreams come true”.

“It’s the best feeling ever, to give the cars back to someone deserving. To put a smile back on a petrolhead’s face.”

The format is a hit, hence the 5th series starting this Thursday.

So as his profile’s grown, is he worried he’ll get recognised when he’s undercover, despite the blacked out visors and fake nose disguises?

“It is absolutely crucial I don’t cock up, especially as we’ve put in 1000s of hours secretly restoring their cars. To date we haven’t had anyone uncover us.”

Rory Reid is the best car TV show presenter of the three of them. He’s got a podgy face. Like me and Fuzz.

So what makes the show a hit?

“I think the best TV is not necessary presenter lead. It’s from the hip.”

So does he get on well with co-star Fuzz the mechanic?

“We get on amazingly well. We make each other laugh. We hang out. You can tell it’s real.

“It’s a couple of mates who, thanks to National Geographic, enjoy their love of rebuilding cars. It’s an honour in itself.”

While Car SOS makes you weep for all the right reasons, last year’s Top Gear had the opposite effect: “Chris Evans made me cry last year.”

“It just didn’t work.. everything about him that was slightly annoying was shown on that show. It was all shouty shouty.”

So what do you make of the new Top Gear with Matt Le Blanc, Chris Harris and Rory Reid?
“It’s the best car show on the television behind all the other ones. To me it’s Fifth Gear five years ago.” Ouch.

“TV shows are all about relationships. You can’t manufacture that?

“You can put together Boyzone or One Direction, but you can’t do that with TV shows.

“Rory [Reid] is the best car TV show presenter of the three of them. He’s got a podgy face. Like me and Fuzz.
“We’re not that arsed about how we look either.”

So how do you choose a project car?

“Make sure it’s the car that you love,” Saw says.

“You’ll have so many down days where you’ll want to kill yourself. If you can open the door on a car you’ve always wanted, you’ve won.

“If it’s something you’ve bought on a whim, you’ll never get around to finishing it.”

Watch Tim and Fuzz on Car SOS, which returns this Thursday at 8pm on National Geographic