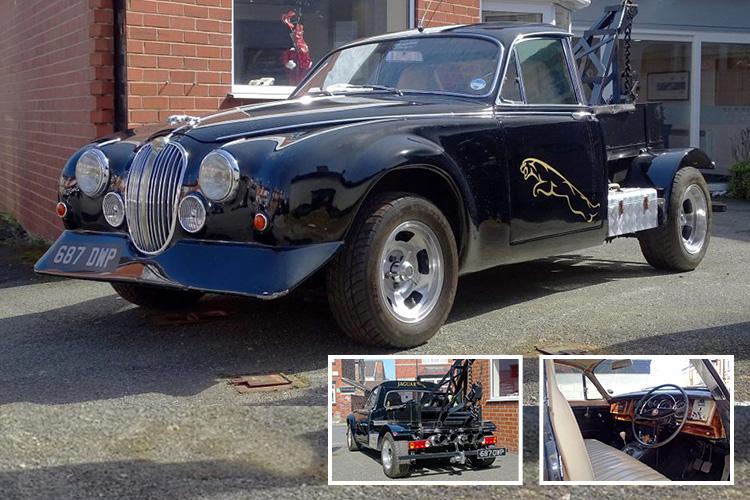 A UNIQUE Jaguar that was converted into a pick-up truck more than 30 years ago is up for sale – and could go for as little as £2,000.

The 1961 wagon began its life as a standard Mark 2 Jaguar saloon but was transformed in the 1970s to look like something fit to cruise the desert wasteland in Mad Max.

After being bought by a retailer who sold Tandberg Radios and televisions, the owner removed the back end, creating a truly one-off vehicle as part of a publicity stunt.

The back of the car is now completely open and includes a cargo bed, a crane and four enormous exhaust pipes.

The owner kept the truck for over thirty years and used it for very occasional deliveries – mostly bringing it out at shows and events.

And now the owner has decided to part with the Mark 2 with it due to go on sale with H&H Classics at their auction at The Pavilion Gardens on April 25.

The auctioneers have described it as one of the most unusual vehicles they’ve ever sold and are expecting offers between £2,000 and £4,000.

Standard Mark 2s can collect as much as £60,000 when sold, but the auctioneers don’t think it would be a good idea to try to restore it to original specifications.

The car has a faded black body, with a large Jaguar emblem painted on one door, and comes with its original 4.2-litre six-cylinder engine.

Inside the cabin are two cream leather seats, while the unpolished wooden dashboard is in need of a bit of work.

Damian Jones, from the sales team at H&H, said: “Theoretically it would be possible to transform this back into a standard Mark 2 but you’d need very deep pockets indeed.

“It is a really fantastic car, that has got all the tools to turn heads wherever it goes. We’d expect it to attract interest from people who attend shows and events because it really is a quirky lot.”