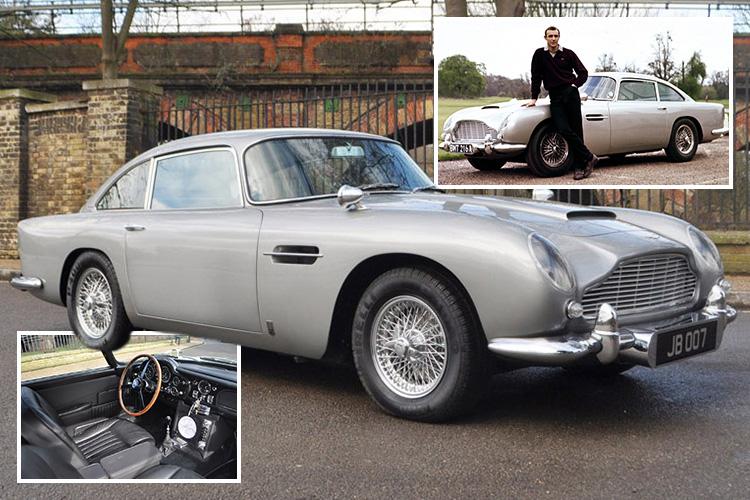 THIS classic Aston Martin has been turned into an incredible replica of James Bond’s Goldfinger car.

The silver icon even includes most of Q’s weapons and gadgets that appeared in the 1964 movie.

Revolving number plates, a rear-mounted smoke gun and ‘machine guns’ which spit real flames at the flick of a switch have all been recreated by the 007 superfan owner.

There’s a circular cut out of a map on the dash, too, that represents Bond’s radar tracker.

The only thing that hasn’t been set up is the ejector seat because when you’ve paid £1million for a car you don’t really want to rip the roof off.

The DB5 is arguably Bond’s most famous car having appeared alongside Sean Connery in Goldfinger before reprising its role over 50 years later alongside Daniel Craig.

The work on this 1962 model was completed by a London-based specialist after the current owner, who comes from overseas, purchased the 1962 Aston three years ago.

Its association with Britain’s most well-known spy extends well beyond its current ownership, though.

In the late 1990s it was purchased by eccentric businessmen, and former chairman of Nottingham Forest FC, Fawaz Al Hasawi who insisted he would only buy the car if it was refinished to what he called ‘James Bond specification’.

As such the DB5 was resprayed in the iconic Silver Birch paintwork and the interior was retrimmed in plush black leather before the sale was completed.

It has also completed around 60,000 miles and auction house Coys Automobile Specialists of Kensington, west London say it represents a unique opportunity for any James Bond fan.

Nicholas Wells, an expert with Coys, said “There is a lot of continuing interest in the James Bond franchise and the value of DB5s in generally driven by 007.

more famous cars up for sale

“Since they’ve started using them again in the recent films, people want them more than ever and this is ideal for any big James Bond fan.

“This is the only time I’ve seen a DB5 done up to these lengths and that positions this one above other Aston Martin DB5s that arrive on the market.

“There’s been a bit of interest from a major James Bond fan and collector so hopefully it will achieve a lot of money for its owner.”

Earlier today we revealed Aston Martin is making a £4million submarine – and it could have come straight out of a James Bond film.