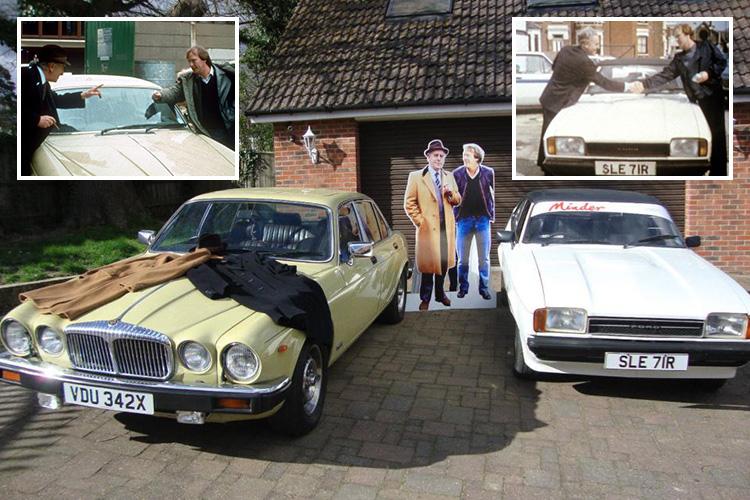 A PAIR of classic cars from hit TV series Minder have been put up for sale on eBay.

The “nice little runners” driven by TV’s famous second-hand car salesman Arthur Daley and sidekick Terry McCann have been listed along with a host of other memorabilia from the 70s show.

Daley’s 1981 Daimler Sovereign and McCann’s Ford Capri Mk2 are set to be auctioned off, along with Arthur’s iconic brown trilby and his camel coat.

Both cars were sold for £84,000 in April 2016 by H&H Classics, but their current auction hasn’t been given a guide price, with the seller keeping the deal open to offers.

McCann’s Ford Capri was best known for its cameo in the opening title sequence and the famous handshake over the bonnet.

Despite both being over 40 years old the two cars each have a relatively low mileage with the Daimler Sovereign only having 44,108 miles on the clock – while the Ford Capri has driven 88,770 miles.

The seller has labelled the motors as part of the “most unique and elite collection of items from one of the most well-known TV series all over the world”.

The seller said: “Since owning this collection, I have since met with Mr Dennis Waterman, Mrs Cole and the main writer Tony Hoare’s partner Linda.

“Within my meeting with Linda, I was privileged to be shown Tony’s office where he wrote many of the early Minder series and many others inclusive of the Sweeney etc.

“The office was also full of Minder memorabilia personal to the couple inclusive of dinner cards to photographs, signed posters and more importantly Tony’s own copies of the scripts he had written. Most of which, is now included with my very exclusive and unique private collection.

“This is an absolute one off opportunity should a ‘deserving punter’ wish to be the future custodian of this quite unique collection of memorabilia.

“I truly believe that this collection should stay as a whole but will consider the thoughts of interested parties.

“As you will note, the collection gained a massive following of support when I listed it last year, which is a true testament to the series.”

The television show ran for 10 series between October 1979 and March 1994 with “Arfur” Daley becoming a national institution and introducing his catchphrases such as “‘er indoors”, “nice little earner” and “nice little runner”.