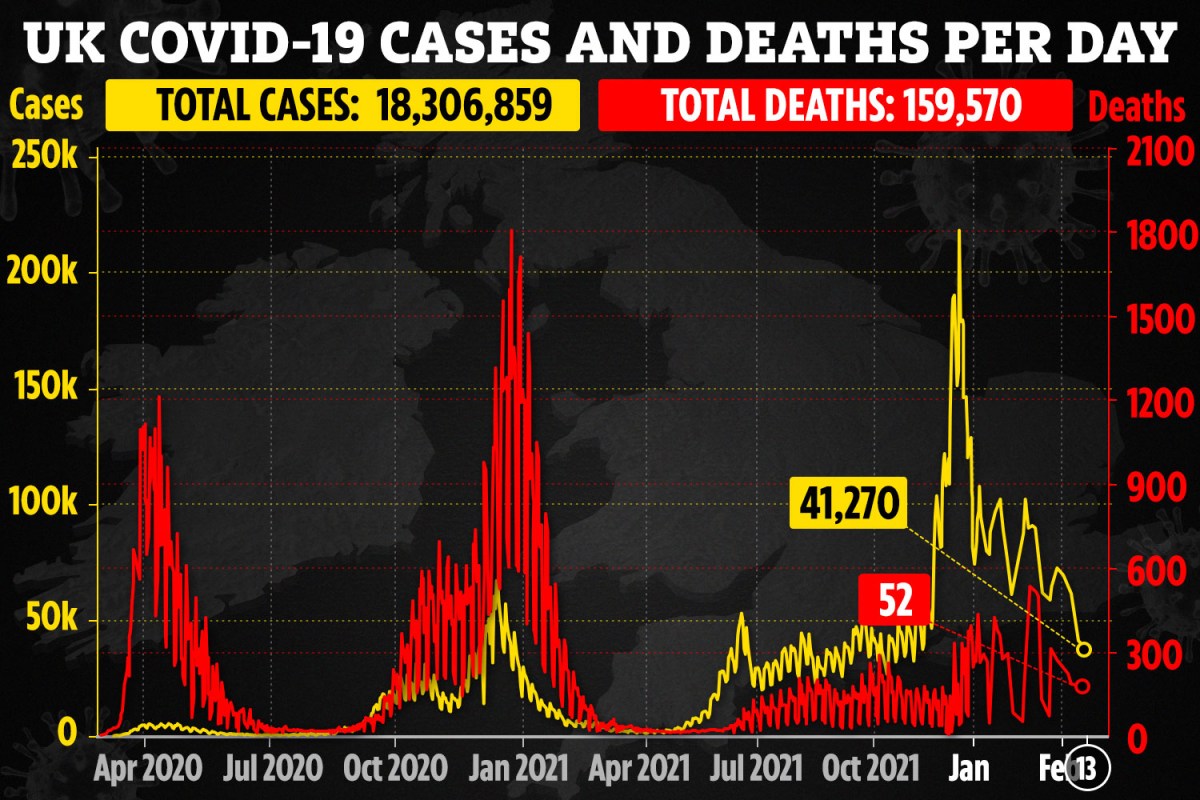 COVID cases and deaths have dropped by almost a third in a week.

Figures show the UK has recorded 52 Covid deaths and 41,270 positive cases of the virus in the latest 24-hour period.

Compared with stats from last week – 57,337 cases and 75 deaths – the numbers have dropped by 28 per cent and 30 per cent respectively.

It comes as the crucial R rate also slightly dropped this week, and now sits between 0.8 and 1.

Last week the R rate sat between 0.8 and 1.1, but it’s important to note that there is always a lag in data with these figures.

As of yesterday, around one in 19 people in England currently have coronavirus, data from the Office for National Statistics (ONS) shows.

Experts said that infection rates have remained high across all nations of the UK, with positive tests increasing in the South East.

Both the South West and the East of England also saw an uptick in cases in the seven days to February 5, ONS data shows.

In the North East, the North West and Yorkshire and the Humber, the number of people testing positive has fallen.

Data from the UK Health Security Agency (UKHSA) also shows that the North East and Yorkshire currently has the lowest R rate in the country, between 0.7 to 0.9.

The South East and the South West have the highest R rates, between 0.9 and 1.1.

It was announced earlier this week that our fast vaccine rollout means we are on course to ditch the final curbs a month early — the last legal restrictions being lifted by February 24.

The triumphant Prime Minister told pals: “We got Covid done” as he announced the end of the measures.

It means Brits will no longer be legally required to isolate for five days if they catch coronavirus.

This will free millions of kids to stay in school rather than be sent home repeatedly because of symptoms that are usually no more than a cold.

Councils will also be stripped of emergency powers that lets them close businesses they deem a risk.

On the same day these last domestic laws are scrapped, No 10 also wants to tear up the final Covid border controls.