MARTIN Compston has revealed he moved to Las Vegas after fans started secretly taking photos of his son and then sending them to him.

The 37-year-old admitted he now prefers living across the pond with his wife, Tianna Chanel Flynn, rather than in his native Greenock, because of the anonymity after being made to feel “weird” by fans.

Talking about being freaked out by fans taking secret snaps of his two year old, he said: “There’s this weird thing.

“People are very kind and they’re just curious, but there’s been this weird thing of people taking pictures of my kid and then sending it to me online and it’s bizarre. I don’t understand why you would. It’s weird, like, they’ll DM you.

“And that’s why I’ve had to stop looking at DMs altogether because it’ll be like, ‘I saw you and your kid at the park, didn’t want to bother you but here’s a picture’. And you’re like… It’s weird.”

Chatting on Table Manners podcast to Jessie and Lennie Ware, he went to say how it’s even more unnerving when people ask him for a photo and offer to hold his child so they can. 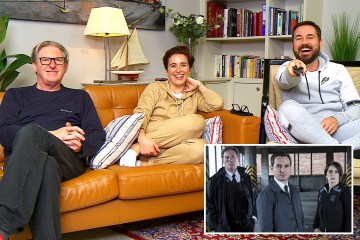 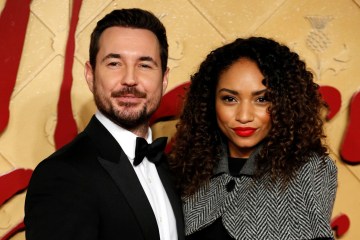 Martin – who is currently starring in Our House – continued: “Genuinely, I’ve been out with my wee one and somebody will come up and go, ‘Can I get a picture?’ and I’ll go, ‘I’m really sorry, but I’m with my son’, and they’ll go, ‘Oh, thingy will hold him’.

“And I’m like, ‘What?!’ People genuinely think they’re just being nice. That’s why Vegas is really good. We can just sort of disappear over there.”

During the chat, The Line Of Duty star opened up about meeting his wife Tianna in LA, when he was drunk during happy hour.

He recalled: “We met in a bar and she was the hostess. It was happy hour on a Monday so the place was deserted and obviously my wife’s quite kind of strikingly beautiful – you know she’s got this incredible hair. I was a right few [drinks] in, it was happy hour.”

He then reveals how they bonded over the fact he was wearing an Irish promise, which resulted in him drunkenly singing Irish folk songs to her.

“So she was kind of forced to put up with me and my pal for several hours.

“It’s just amazing that we walked into that bar on that day and I think about it and go, ‘If I didn’t, then…’ You know, she’s my wife and we have a kid together now.”

Martin and Tianna wed at the Compston family chapel in Greenock, Renfrew, in 2016.