AFTER signing up to ­Dancing On Ice, Joey Essex knew he would be starting the New Year with a few falls.

But the former Towie star had no idea one of those would be for his glamorous pro partner, Vanessa Bauer.

After being paired up with the German skating champion, the duo are now dating.

And Joey, 32, admits he is ­struggling to keep his hands to himself — which is hardly surprising, given the pair have been spending every day training ahead of tomorrow night’s launch show on ITV1.

“I’m truly blessed to be paired with Vanessa, I was very happy,” Joey said with a smile in an exclusive chat ahead of the series.

He added: “You’re close and you are touching each other’s legs . . . and everywhere else. You are very intimate and it can happen. 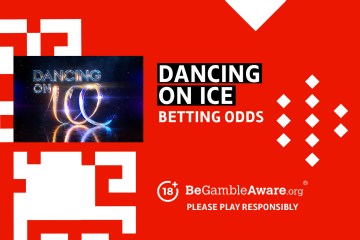 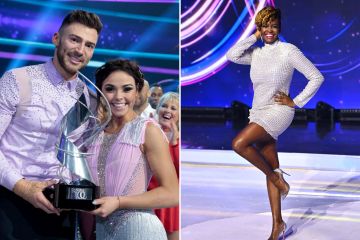 “Honestly I don’t know how people do this show when they’re married — it would be a disaster.

Since being paired together in November, Joey and Vanessa, 26, have become almost inseparable.

As well as spending time at Joey’s Essex home, just this week he romanced Vanessa over a traditional, East End pie and mash lunch.

Joey said: “She’s a lovely girl, she’s beautiful inside and out, and we do really get on well. You know, it’s nice to wake up in the morning and know that I’m going to go meet Vanessa.

“We both smile, both laugh and just have a really good day on the ice.

“We really get on. She’s a very humble, honest, genuine, lovely girl.”

‘Even if it’s breaking bones, I’m up for it’

Dancing On Ice is as famed for its celebrities’ amazing routines as it is for being a hotbed of romance.

Among others, David Seaman fell for wife Frankie Poultney, while Samia Ghadie married Sylvain Longchambon after meeting on the show.

Vanessa herself has partnered stars who were later struck by the so-called “curse” and split with their girlfriends, including Jake Quickenden, Wes Nelson and Joe Warren-Plant.

So what is really going on between Joey and the skate siren?

Joey said: “Vanessa is just so nice. The way she cares about her skating, she’s so passionate about this.

“I would hate to ever let her down in any way, shape or form.

“Vanessa doesn’t know this yet but I want to try something no one has ever done, even professionally, something so unique, the strangest, most craziest move you’ve ever seen.

“Even if it means breaking bones, I’m up for it. I genuinely mean that. I need to make Vanessa proud. All I can say is Vanessa is super-strict and I like that, and that’s exactly what I asked for in a partner on the show.”

The steely side is perhaps surprising from a man who shot to fame on Towie as a loveable dimwit.

But more than a decade later, Joey has had the last laugh after forging a successful career on screen and off, with an estimated net worth of £8million thanks to a string of savvy investments.

And he’s set his sights on winning — at any cost.

He said: “It might be hazardous, but even if I don’t pull it off I want to try. And then people will know this is not a joke for me. I need to make myself proud and I need to make the whole of the UK proud.

“I feel like I get doubted a lot and I feel like I want to try and — well, not try — I WILL prove people wrong.”

You might write it off as big talk, had Joey not already cut himself to the bone in one of the series’ most dramatic falls to date.

Just days into training, he tipped backwards and almost chopped his finger off with his own skate.

He explained: “As I was skating on the first day around the rink, everyone had their hands over their face, like, he’s gonna hurt himself because I was falling over a lot.

They said you need to slow down. We know you’re having fun, but relax.

I was being funny and was like, ‘Yeah I will. I don’t want to lose my finger!’

Then within ten seconds I fell over backwards and my hand went under my skate and there was blood everywhere.

They thought I was joking because of what we’d just been saying.

“All I remember is a producer yelling, ‘No he’s being serious! His finger!’ I could see the bone. Four medics came over with a stretcher.”

But the only thing on Joey’s mind was how the incident would make him look.

He went on: “That’s what made me even more scared, because I was like, they’ll think I’m not taking this seriously. I was disappointed because I don’t want anyone to think I was here to mess around.

“There’s now a big scar on my finger that feels weird and it’s quite uncomfortable as well. My finger’s still stiff. I’ve got bad memories of that day, it was a big shock to me.”

Joey’s not the only one heading into Sunday’s launch injured.

This week, head judge Christopher Dean revealed he had broken his finger “tripping over a suitcase in the dark”.

And Ekin-Su could miss the show after being struck down by flu.

Luckily for Joey, Vanessa has been a rock for him during his battle back on to the ice.

So what does the pro reckon are his strengths — perhaps his energy, stamina, flexibility?

Joey laughed: “All of them! Off the ice or on the ice? Both are quite good. I think Vanessa’s surprised how good I am at lifting her, spinning her around. She knows I’ve got the ability to be as good as anyone at doing this.

Through appearances on brutal shows such as SAS: Who Dares Wins and The Jump, Joey has a reputation as a daredevil.

Against the odds, he beat royal sportsman Mike Tindall in the final of the second series of Channel 4’s axed ski show but still reckons Dancing On Ice presents more of a challenge.

He added: “I’m very competitive. The best man won, that’s all I can say! On Dancing On Ice you’ve got gymnast Nile but everyone’s really competitive. Michelle really wants to get to the end and win it. The Vivienne is really, really, good and even Ekin-Su — he’s improved a lot.”

Joey now hopes Dancing On Ice could open the door to a new career.

He added: “My whole life, I always wanted to win something, a medal. Just to do something really well I was passionate about.

“I love athletics stuff, I love boxing. I love tennis, so anything like that. But ice skating, I couldn’t even imagine winning the show.

“To finally be number one would be amazing.”

DURING his 11 years in showbiz, Joey has taken on almost every reality show going.

Here, the telly daredevil rates each of them on a scale of one to five for ­toughness.

IT was ruthless. There’s a reason it’s not on TV any more, it will probably never come back. I was lucky I didn’t lose my head or fingers on that show.

ON the first day of Splash! I had to do a pencil dive and my balls slapped the water and, I swear to God, I had a nut injury for three weeks. It really hurt. But it wasn’t that scary.

WHEN I did the Australian ­version, I had to go under some ice and there was water in my goggles and I couldn’t see and I couldn’t get out. They had to come and grab me. I thought I was going to die at one point.

THAT was actually pretty nerve-racking. So I know how it feels to get up in front of a live stage audience, and try to pull something off. But that wasn’t live like Dancing On Ice will be.

OH my God, that was definitely the worst. If they called me back up again, I’d have to have a big chat with my family because it was painful in every way – mentally, physically. It was really tough.

I’VE got to dance, I’ve got to skate and I’ve got something to prove.