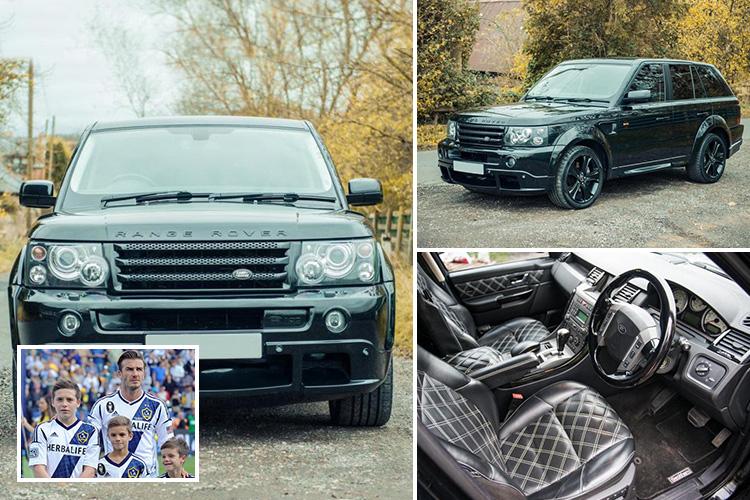 A UNIQUE Range Rover Sport built for David Beckham up for sale for a cut-price £36,000.

The one-of-a-kind SUV comes with twin rear TV screens once used by sons Brooklyn and Romeo to play on their PlayStations.

Beckham spent around £100,000 upgrading the Rangie in 2007, fitting it with a unique interior which also includes hand-stitched quilted leather seats and a bespoke sound system, along with a “Designed for David Beckham” plaque.

The car, customised by Kahn Conversions, lists the retired footballer as the first owner on the V5C, and its current owner is looking to offload the family SUV.

And considering the motor’s original £50,000 price tag, plus the upgrade worth twice that, if the car does sell within its guide it will be a bargain for the buyer.

First registered with the number plate “DB1001” the Range Rover Sport has covered just over 65,000 miles and had three owners including the former England captain while he was playing for LA Galaxy.

The SUV is powered by a 4.2-litre supercharged V8 engine which develops around 385bhp, giving the car a 0-62mph time of 7.2 seconds and a top speed of around 140mph.

However, all the power and weight means the Range Rover Sport is a thirsty vehicle – averaging just 17.7mpg. No problem on Golden Balls’ wages but tough for the regular driver.

Despite its low fuel economy rating, the car still offers a unique opportunity to get a taste of how the footballing elite like to drive.

Arwel Richards, classic car specialist at CCA, said: “Our auction at the NEC offers the chance to own this amazing personalised Range Rover with impeccable provenance.

“Indeed, David Beckham remains one of the most recognisable faces on the planet thanks to his 115 England caps and appearances for some of the world’s biggest football clubs, including Manchester United, Real Madrid and LA Galaxy.

“Just think, you could be sharing the same driver’s seat as the man who has scored some of the most memorable goals in football, was an England football captain and who went on to become a global superstar.”