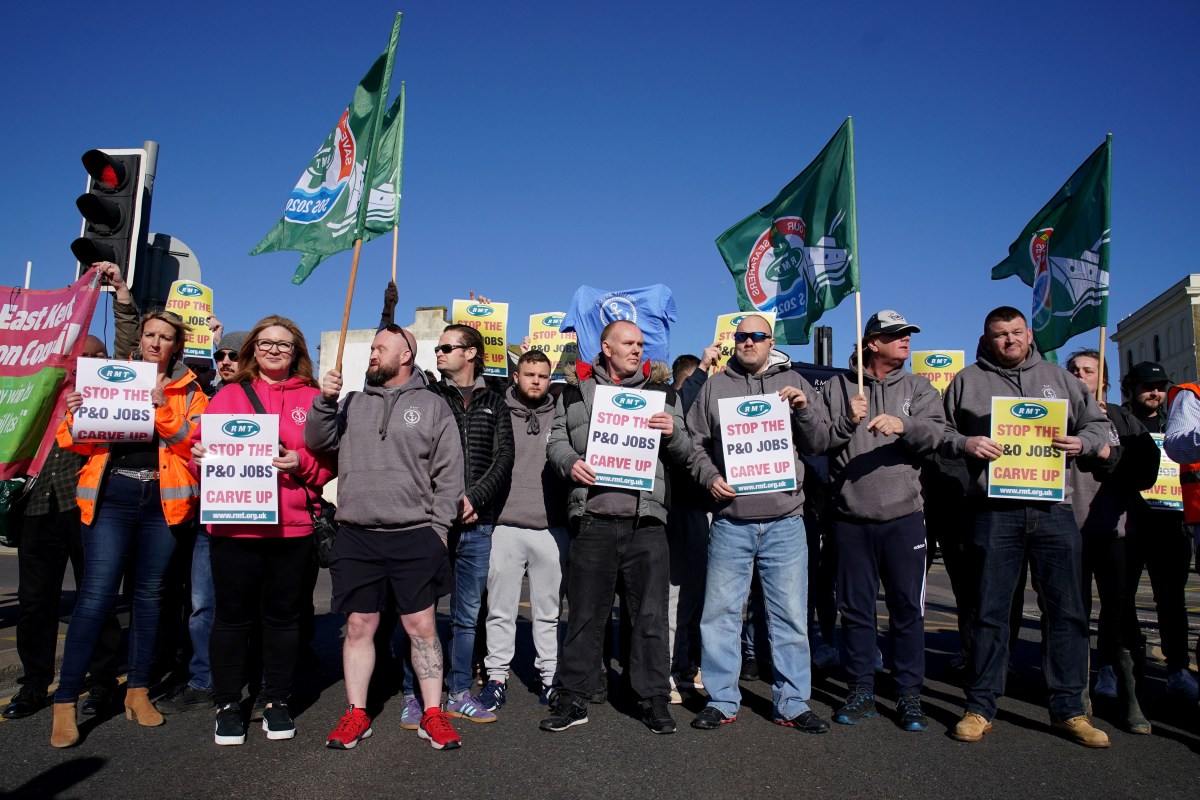 SHAMED ferry firm P&O should hand back the £10 million in taxpayers’ cash it got under the Covid furlough scheme, a raging minister said today.

Armed forces minister James Heappey said the company had acted “abominably” in laying off 800 staff and relaxing them with agency workers.

And he warned bosses Treasury lawyers are already exploring how to recoup the pandemic money which was doled out to help it keep employees on.

Ministers are also now looking at beefing up labour rights amid fears the cost of living crisis will see a spike in pay disputes.

P&O Ferries sparked outrage yesterday when it brutally axed 800 crew members over Zoom and cancelled all sailings for up to 10 days.

Ports were quickly plunged into chaos following the 11am announcement as passengers, workers and lorry drivers had nowhere to go.

Mr Heappey admitted the Government is powerless to help them get their jobs back, but said it will look at recovering taxpayers’ cash.

He raged: “It’s disgraceful. I don’t think the Government got much more notice than the employees of P&O did.

“Sadly the Government cannot force an employer to continue to employ people the employer has said it doesn’t want to employ.

“It’s an absolutely horrendous ways to treat their staff. There’s a lot of anger amongst ministerial colleagues.”

The armed forces minister was asked whether taxpayers’ would be getting back the £10m furlough money in response.

He replied: “It certainly feels to me that it would be the right thing to do for P&O to hand that money back.

“I’m sure that colleagues and the Treasury and the Department for Transport will be looking into it.”

Government lawyers are already looking into recouping the cash but fear it may be difficult to build a case.

Mr Heappey said the shock development has also sparked new plans to crack down on “despicable” hire and fire policies.

“I know that my colleagues in the department for business are looking at how we do crack down on this because it is increasingly common.

“There is a reality that as we enter into a period where there is inflation, and there will be a challenge to cost of living, inevitably there will be a growing number of disputes over pay.

“And so obviously colleagues are looking at how we make sure that workers are protected and supported and that businesses can’t behave as P&O did yesterday.”

His remarks come after MPs from across the political divide ripped into the ferry firm over its decision.

Huw Merriman, who chairs the Transport Select Committee, said: “P&O, this once-great flag carrier of the seas, have made an appalling error.”

They said: “This shocking move has been made without warning, notice or consultation in a deliberate attempt to undercut the wages and conditions of British seafarers.

“This is despite P&O Ferries’ owners, Dubai-based DP World, having received millions of pounds in taxpayer support during the pandemic.

“Who received over £10million through the furlough scheme, and requested a £150m bailout from Government, despite DP World paying out £250million to shareholders.

“We cannot allow a dangerous precedent to be set, all the more so on transport routes which are strategically vital to the UK.”

A visibly furious transport minister Robert Courts told the Commons the decision will lead to “disruption” for travellers.

He said: “Reports of workers being given zero notice and escorted off their ships with immediate effect while being told cheaper alternatives would take up their roles shows the insensitive way in which P&O Ferries have approached this issue, a point I have made crystal clear to P&O Ferries’ management.

“I am extremely concerned and frankly angry at the way workers have been treated by P&O Ferries.”