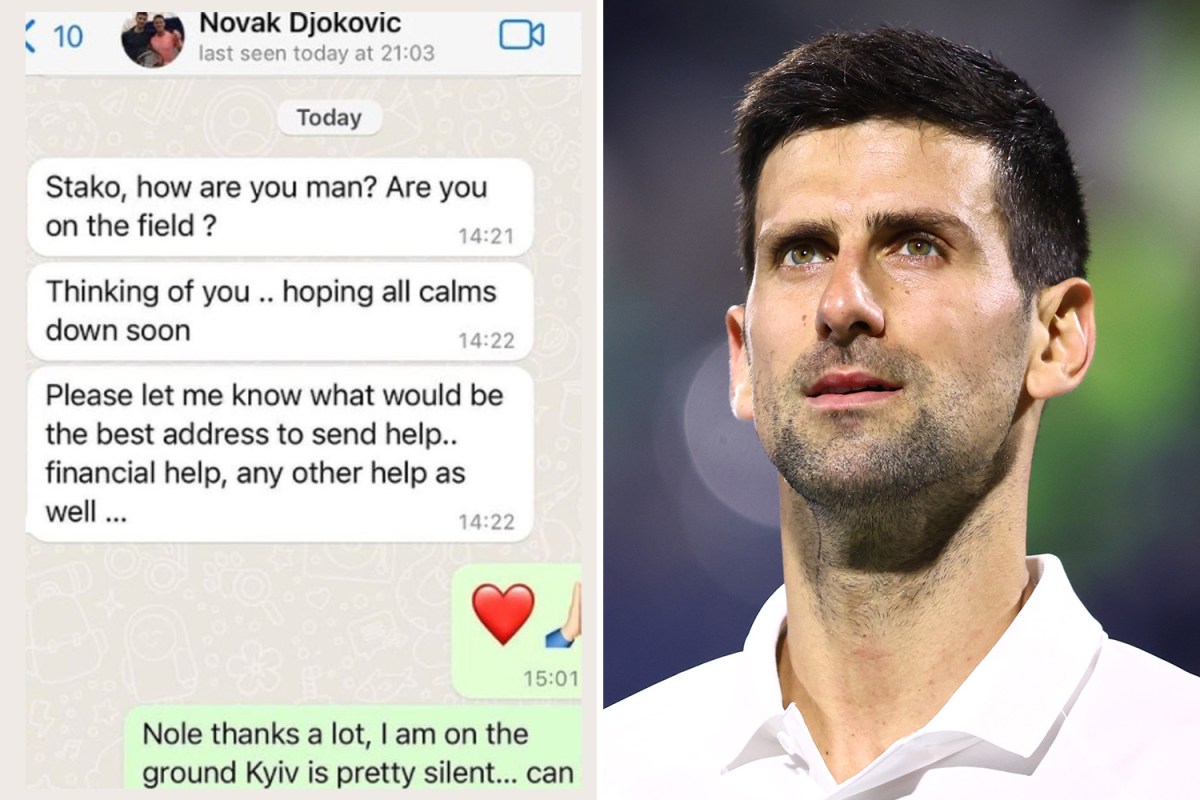 Stakhovsky was born in Kyiv and now lives in Hungary but returned to his homeland when Russia invaded the country last month.

He has signed up to join the army and aid in the heroic defence by the Ukrainians.

And the 36-year-old took to social media to reveal how world No2 Djokovic – who grew up in war-torn Serbia – reached out personally.

Stakhovsky shared a screenshot of his WhatsApp conversation with the 20-time Grand Slam champion and one of the greatest players ever.

Djokovic wrote: “Stako, how are you man? Are you on the field?

“Thinking of you… hoping all calms down soon.

“Please let me know what would be the best address to send help.. financial help, any other help as well…”

Stakhovsky, who had a 0-4 head-to-head record against Djokovic, replied with a red love heart.

He added: “Nole thanks a lot, I am on the ground Kyiv is pretty silent.”

Stakhovsky revealed the pain and difficulty of leaving his family to sign up and help protect Ukraine.

He told ABC News: “I just had this strong feeling that I have to do it.

“I didn’t really say goodbye to the kids. I just kissed them goodbye, and I said that I’ll be right back. They were watching cartoons and reading books, not really paying attention.

“If I stayed I would have felt guilty that I left my father and brother in Ukraine.

“Crossing the border was a tough choice because I knew that’s the point where, you know, you don’t go back.

“But by driving through Ukraine, driving through the country, seeing all the people coming into groups, doing their own resistance units with hunting guns, barricading the roads, it’s really inspirational.

‘WE WILL SRUVIVE… I WILL RETURN’

In a separate, emotional Instagram post on Sunday, Stakhovsky shared a photo with his wife Anfisa and three children.

He added: “We all fight for the future of our children… for a world with a future.

“Wait a little longer… we will survive them. They will run after the Russian ship, and I will return to you.”

Stakhovsky famously beat Roger Federer in an astonishing second-round result at Wimbledon in 2013.

He reached a high of No31 in the world three years earlier and retired to focus on his wine company full time after losing in Australian Open qualifying this January with four singles and four doubles titles in his career.