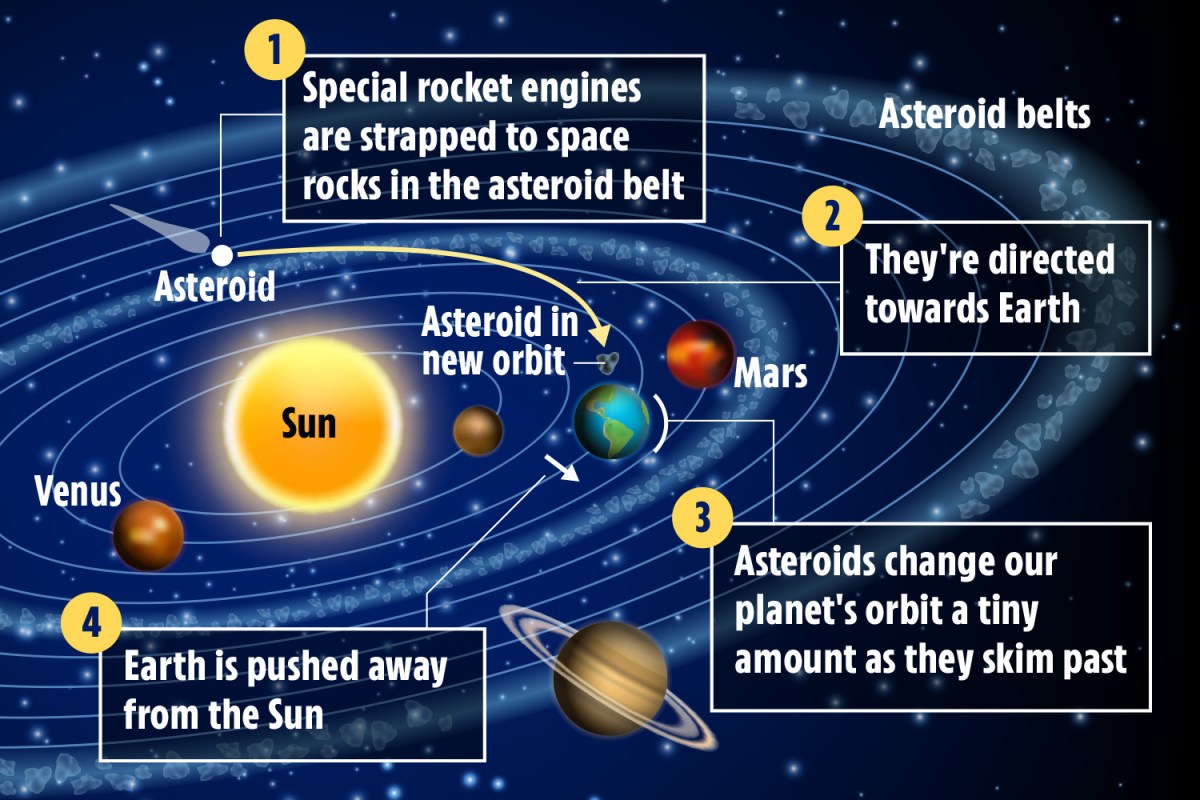 That’s according to one bonkers scientist, who has controversially claimed that asteroids adorned with enormous, high-tech sails are the solution to our climate woes.

Dr Sohrab Rahvar, an astrophysicist at the Sharif University of Technology in Iran, outlined his hypothetical ploy in a paper published online on Tuesday.

He told UK Times that the scheme would involve pushing Earth’s orbit away from the Sun in a game of “gravitational billiards”.

By directing objects from the asteroid belt into near-misses with our planet, he claimed, scientists could nudge us thousands of miles further from our star.

This would serve to cool global temperatures which – alongside the reduction of greenhouse gas emissions – would mitigate the effects of global heating.

The proposal, which would take decades to complete, has sparked controversy among scientists, one of whom described it as “bonkers”.

It would be astronomically expensive to pull off with no guarantee of working, and if it were to go wrong would pose a serious threat to life on Earth.

The plan also relies on solar sails, a hypothetical type of high-powered propulsion technology that has not yet been invented.

Dr Rahvar’s strategy relies on a technique known as a “gravity assist”.

It’s an approach used by space agencies to accelerate a spacecraft or redirect its path by flying it close to a planet or other space object.

According to Dr Rahvar, under certain circumstances, such close passes can ever-so-slightly change the orbit of the object providing the “assist”.

He proposes strapping solar sails – high-tech reflective sheets propelled by the sun’s radiation – to space rocks in the asteroid belt.

These can then be sent in the direction of Earth to perform close passes with Earth that gradually change our planet’s orbit.

“We need a series of asteroids to [pass close to] Earth to have effective temperature loss,” Dr Rahvar told UK Times.

“For instance, in order to decrease the Earth’s temperature to one degree, we need to move it away from the sun in the order of 150,000 miles.”

He added: “The result would be a fainter sun in the sky and a decrease in the Earth’s temperature.”

According to the physicist’s calculations, it would take upwards of 70 years to complete the hair-brained project.

In the meantime, engineers need to invent a working solar sail that can travel into the deep reaches of space.

Scientists have discussed the possibilities of the technology for decades, but a working prototype remains a long way off.

Dr Rahvar said he hadn’t estimated the cost of the project. It would likely reach the tens of billions of dollars.

He stressed that the cheapest and most effective way to halt global temperature rises is by reducing greenhouse gas emissions.

“The cheapest way to get rid of global warming is the decarbonization of the atmosphere,” he told UK Times.

“However, advanced future civilizations on the earth will definitely have the capacity to carry out the project that I propose here.”

The research was published in the pre-print journal Arxiv. It has not yet been peer-reviewed by scientists.

Experts reacted to Dr Rahvar’s paper with a mixture of confusion and scorn.

Dr Jonathan McDowell, a researcher at the Harvard–Smithsonian Center for Astrophysics, said the proposal risked flinging a space rock straight into Earth.

He told UK Times: “I haven’t worked through the maths in detail but some of it looks dodgy.

“He also completely fails to follow through with discussing the implications of his results.

“Even if you assume his results are right, they imply that to fix global warming this way you would need to put hundred-square-kilometre sails on each of about a hundred million asteroids and wait a century, with a significant risk of putting one or more of these asteroids accidentally on a collision course with Earth – if not on the first pass, then on subsequent orbits.

“So another way of summarizing his paper is: No, you can’t fix global warming this way.”

His comments were echoed by Professor Brad Gibson, an astrophysicist at the University of Hull, who described the plan as “not feasible today in the slightest”.

In other news, personalised smart guns, which can be fired only by verified users, may finally become available to U.S. consumers this year.

Scientists are embarking on a mission to unravel the mystery behind dozens of grisly child mummies buried in an underground tomb in Sicily.

Police have caught an Italian mafia henchman who’d be on the run for 20 years after spotting the fugitive on Google Maps.

And, one of the best-preserved fossils ever found has confirmed that young dinosaurs burst from their shells just like baby birds.