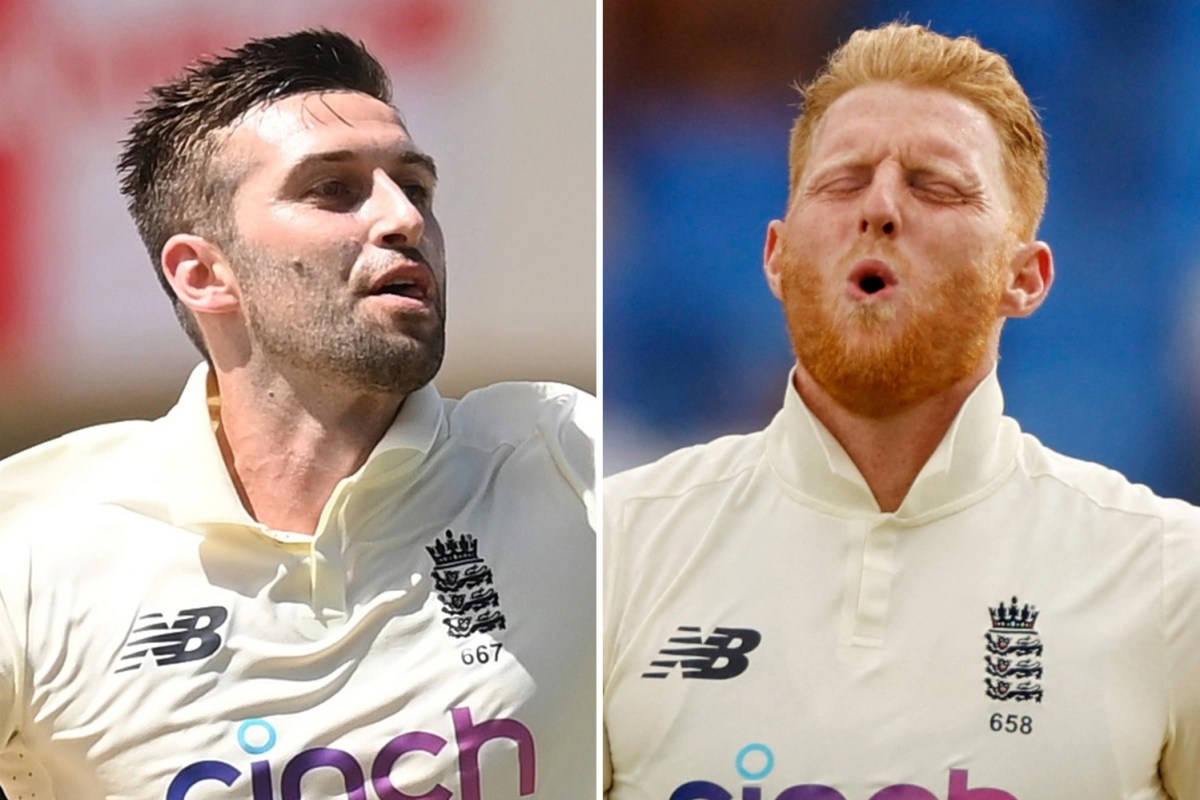 NO Anderson. No Broad. But still plenty of fight.

When you choose to ditch a pair who have 1,177 Test wickets between them, the stand-ins had better come to the party.

And just as Jimmy Anderson and Stuart Broad might have been tempted to put on rueful ‘told you so’ smiles, Joe Root’s attack at least found the cake and candles.

After Jonny Bairstow reached 140 and England made 311, the pressure was on Chris Woakes and Craig Overton to ensure cricket chief Andrew Strauss did not regret axing his legendary strike pair.

But Woakes and Overton allowed the West Indies to get off to a flier.

Then, sparked by Mark Wood and Ben Stokes, England dragged themselves back into a contest that may yet be determined by how Jack Leach, ruthlessly tight as the sunlight dimmed, bowls in the final knock.

All four seamers were among the wickets as the Windies closed day two of the First Test on 202-4, still 109 runs adrift of England’s first innings total but probably a neck in front.

Woakes in particular, though, has to sharpen up his act after leaking runs to all parts of the Sir Vivian Richards Stadium.

He came into this game in Antigua with huge doubts over his ability to deliver away from home.

Just 31 previous overseas Test wickets at a cost of 52 runs each was in stark contrast to the 94 victims at a miserly 22 runs apiece on English soil.

Sadly, the boundaries came off him far too easily.

He must be better today, straighter and fuller — and England have to swiftly end the partnership between Jason Holder and Nkrumah Bonner, which has already posted 75 runs.

Earlier, England had added 43 to their overnight score, going beyond 300 for the first time in 13 innings in the process.

Bairstow and Woakes extended their partnership to 71 before the Warwickshire all-rounder gloved a Jayden Seales lifter to keeper Joshua Da Silva for 28 valuable runs.

Had Holder clung on to a simple return catch from Bairstow soon afterwards, England might have struggled to even get to 300.

Wood went for a single when his attempted pull off Alzarri Joseph ended up in the hands of backward point.

But Bairstow, on 126 when he was dropped, moved on to equal his third-highest Test score before a hoick across the line was brilliantly gathered by Holder — far harder than the one he had put down.

Now it was about how England bowled with the new ball.

Brathwaite is a natural nurdler but he dashed to 50 off just 62 balls, including seven fours and a smeared six over the top off Leach.

Yet just as England looked out of ideas, Overton strangled Campbell down the leg-side for 35, gratefully snared by Ben Foakes, with the score on 83.

And as the ball began to reverse, Wood lured Brathwaite into chasing a wide one, pouched by the tumbling Overton at gully for 55.

Then Stokes, all hustle, bustle and aggression — and bowling ahead of schedule — induced a loose drive by Shamarh Brooks, bagged by skipper Root at first slip.

And when Woakes successfully urged a review after Jermaine Blackwood was caught off edge and thigh pad at gully, they were right back in it at 127-4.

The relief on Woakes’ face was palpable.

He had been clattered to the boundary twice more in his comeback over and was going at a run a ball.

After tea, England kept up the pressure, Leach bowling nine straight maidens, without getting any reward as the ball softened before Holder took a liking to Root’s off-spin.

Still all to play for.