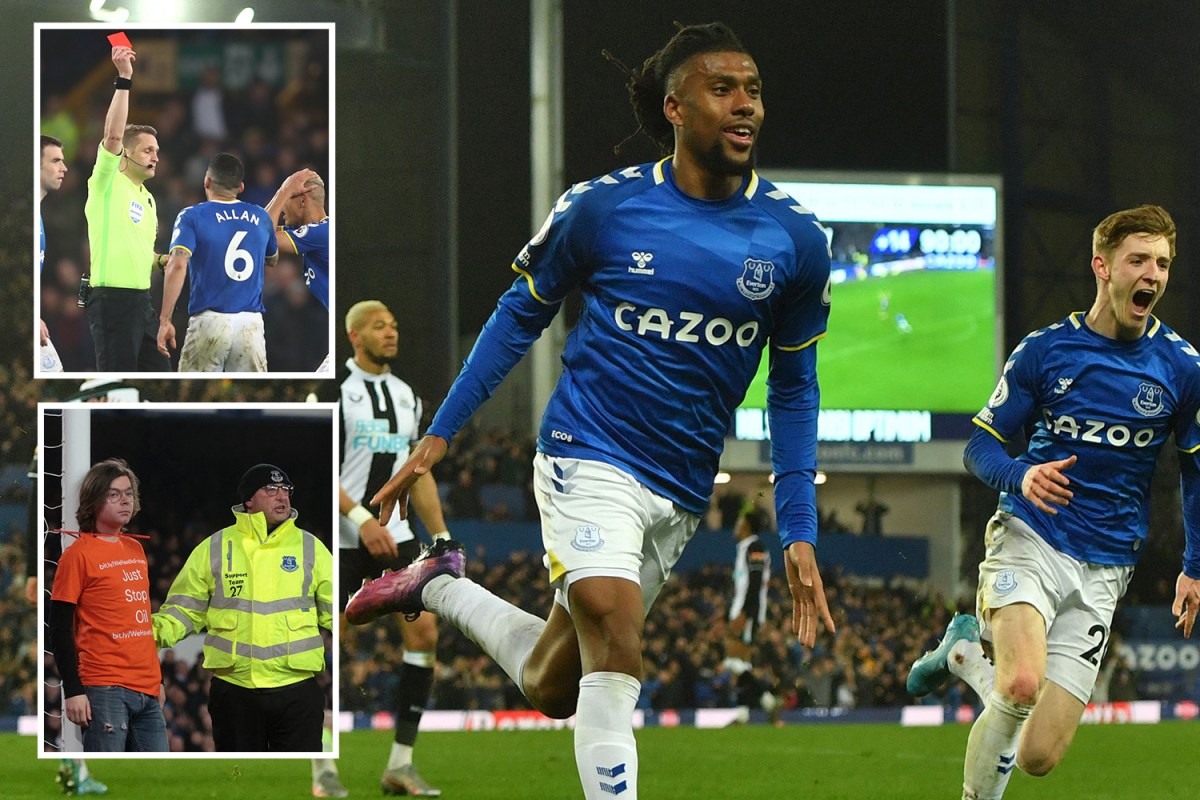 THERE has been plenty for supporters to protest about during a disastrous season at Everton.

But this was a new one.

Early in the second half a young fan burst onto the pitch from the Gwladys Street and tied himself to Asmir Begovic’s goalpost by the neck.

Those watching had been desperate for some goalmouth action in a dismal opening 50 minutes – but this was not quite what they had in mind.

He was wearing a T-shirt which said ‘Just Stop Oil’ and stewards needed an industrial-sized set of bolt cutters as they battled for eight minutes to get him loose.

When they finally succeeded, another supporter ran out of the stands and tried to attack the protestor.

Yet in the FOURTEEN minutes added on at the end, Alex Iwobi found a way to free Everton from the shackles of relegation.

The Toffees had not scored in over seven-and-a-half hours of Prem football when the former Arsenal man swapped passes with Dominic Calvert-Lewin and beat Martin Dubravka.

They did it with ten men too – and how big could this be for the rest of the season?

Frustrated home supporters must have felt like launching another protest when Allan was given a red card for a wild tackle on Allan Saint-Maximin – after a VAR review.

But instead, their team stuck together and scored the winner with almost 100 minutes on the clock.

The three points Everton had won in 2022 before this was the fewest of any club in the top four tiers of English football.

In that kind of form, it was little wonder they started the night with only goal difference keeping them out of the relegation zone.

The visiting Newcastle fans taunted their rivals with chants of ‘Rafael Benitez’ – the former boss who began the decline of the Toffees earlier in the season.

But things have got little better since Frank Lampard – who BROKE his hand during raucous celebrations – took charge, making this one of their biggest games in recent years.

The Goodison crowd were up for this one and the players tried to respond with a positive start.

A Demarai Gray corner found the head of Ben Godfrey but he could only direct his header straight at Dubravka.

However, that was to be one of only a couple of touches a home player had in the Toon box during the first half.

They have scored only eight goals in the opening 45 minutes of a Prem match all season – and that worrying stat did not show much sign of changing here.

Most of the chances came at the other end as Ryan Fraser’s centre picked out Chris Wood at the back post but the Kiwi forward could not direct his header on target.

Fraser then ran onto a pass through the middle by Joe Willock but home skipper Seamus Coleman got back to make a perfectly-timed last-ditch tackle.

Prior to losing to a late goal at Chelsea on Sunday, the Toon had won six of their previous seven Prem matches to ease their relegation fears.

And they looked like the team with more confidence.

That was demonstrated by defender Fabian Schar who tried his luck with a free-kick from the halfway line which almost caught out Asmir Begovic – who was deputising for the unwell Jordan Pickford.

For all their endeavour, there was not much of a threat from Everton.

The 21-year-old who tied himself to the goalpost may not have been the only home supporter who wanted the game stopped.

After the long stoppage, the game took a while to get going again – maybe the players were still trying to work out what they’d just witnessed.

Miguel Almiron made a great run down the right and laid it back for Bruno Guimaraes who did not get the connection he wanted and the home keeper was able to save.

A rare attack at the other end saw Anthony Gordon cut in and smack a long-range effort which was tipped over by Dubravka.

Sub Calvert-Lewin was inches away from reaching a Richarlison cross – but the home side’s momentum was lost when Allan was red-carded.

Ref Craig Pawson initially gave a yellow when the Brazilian scythed down sub Saint-Maximin near the halfway line but the VAR asked the official to have another look.

They decided he was high and out of control and the card was upgraded to a red – much to the fury of the home crowd.

At that point they might have settled for a point.

But step forward Iwobi who swapped passes with Calvert-Lewin before scoring coolly to spark wild celebrations in the stands and home dugout.