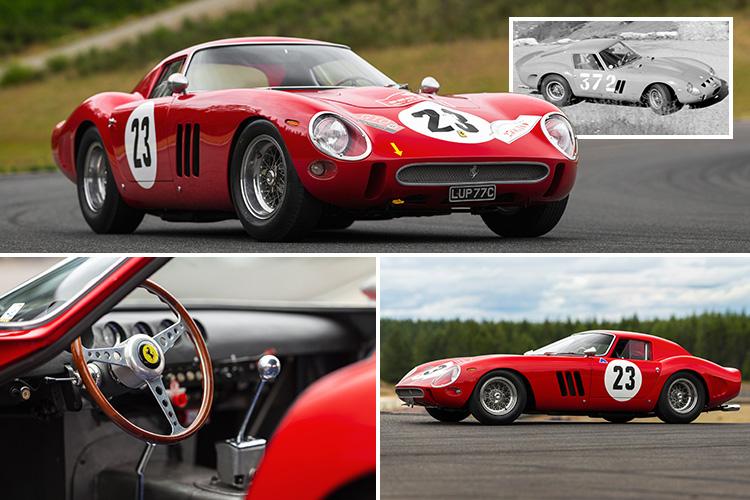 A BRILLIANT Ferrari 250 GTO is set to become the most valuable car ever sold at auction when it goes under the hammer for £35million.

The 1962 model road racer has been given a $45million valuation – but it’s expected to fetch more than that at auction in August.

One of just 36 examples of the 250 GTO model built by Ferrari, it’s considered the “most beautiful” model ever made by the famed Italian marquee.

The 250 GTOs are well known for their strong racing pedigree, with this particular model having featured in a number of races dating back to 1962.

It won the 1962 Italian National GT Championship and nine other races that year with its first owner-driver.

Entering in a number of events in the 1960s without ever crashing, the motor retains its original engine, gearbox, and rear axle – a rare feat for any race car.

And it was also one of just four 250 GTOs to be re-bodied in 1964 to “Series II” specification, with work completed by Ferrari at their factory.

The car has been held by its current owner since 2000, and is said to be a “holy grail” motor for serious Ferrari collectors.

It’s set to go under the hammer in California with RM Sotheby’s on August 24-25.

And it doesn’t even need to meet its expected value to become the most expensive auction car.

The title of the world’s most valuable car is also currently held by a Ferrari 250 GTO, with a silver 1963 model selling privately earlier this month for £52million.

Shelby Myers, Car Specialist at RM Sotheby’s, said: “Due to the evolution of technology and safety regulations that followed, the GTO was essentially the final true road racer, marking the end of an era when drivers really got their hands dirty.

“This was the last car that you could park in your garage, drive to the track, win the race, and then drive home.

“This marks just the third time that a GTO has been offered for public sale in the new millennium.”

LatestUK.news is our complete news portal about the UK, US, world, living, lifestyle, fashion, wellness, etc. Take your time and immerse yourself in this amazing experience! LatestUK.news is an automated news aggregator website. Each material, such as the author and the hyperlink to the primary source, is defined. All trademarks and materials are the property of their rightful owners and authors. If you own the article or content or news and do not want us to publish it, please contact us by email at [email protected]mail.com. We will remove it within one business day.