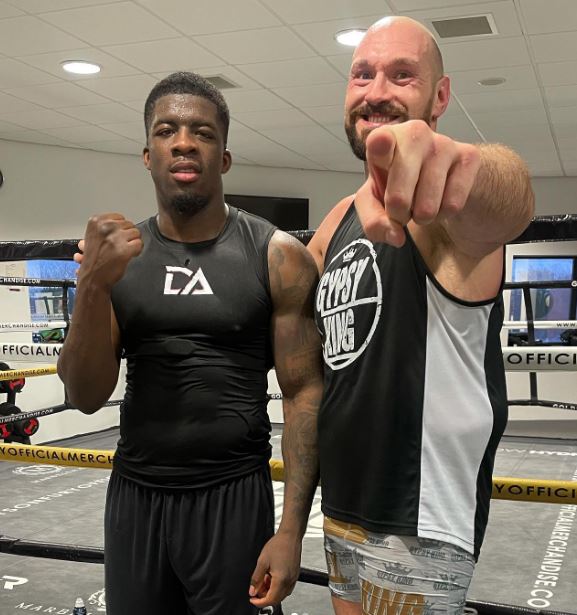 TYSON FURY has called on the help of David Adeleye in sparring once again as he prepares to fight Dillian Whyte.

The up-and-coming British heavyweight was drafted in for Fury’s 2020 rematch with Deontay Wilder, which ended in a seventh-round win.

Now, as the Gypsy King prepares for his return on April 23, he has once more brought in Adeleye – who stands 6ft 4in like Whyte, 33.

The training partners were pictured with Fury’s Morecambe gym, where he is preparing for the WBC title fight.

Fury, 33, said: “I’ll bring in Jared Anderson from the US for sparring, I’ll use David Adeleye. I’m also going to use Martin Bakole.

“Bakole is AJ’s mate but I’ve seen interviews where he said he’s sparred us all and I am the only one he cannot land a glove on.”

Fury has promised to leave no stone unturned for his training camp, which he claims will be his last before retiring.

And the shock decision – which has been teased but not followed through before – was backed by his promoter Frank Warren.

Warren iFL TV: “If he decides to do that, then that’s his choice and we’ll support him wholeheartedly.

“The last thing I want is for him to be getting into the ring if his mind and heart aren’t in it.

“If they’re not in it, then he shouldn’t be in the ring; it’s a dangerous place.

“He’s very, very wealthy, he’s done everything that’s been asked of him and it’s his choice, as I say.

“If he wants to carry on, there’s some great fights out there to be made with him, but if he doesn’t want to do it, I’m with him 100 per cent.”