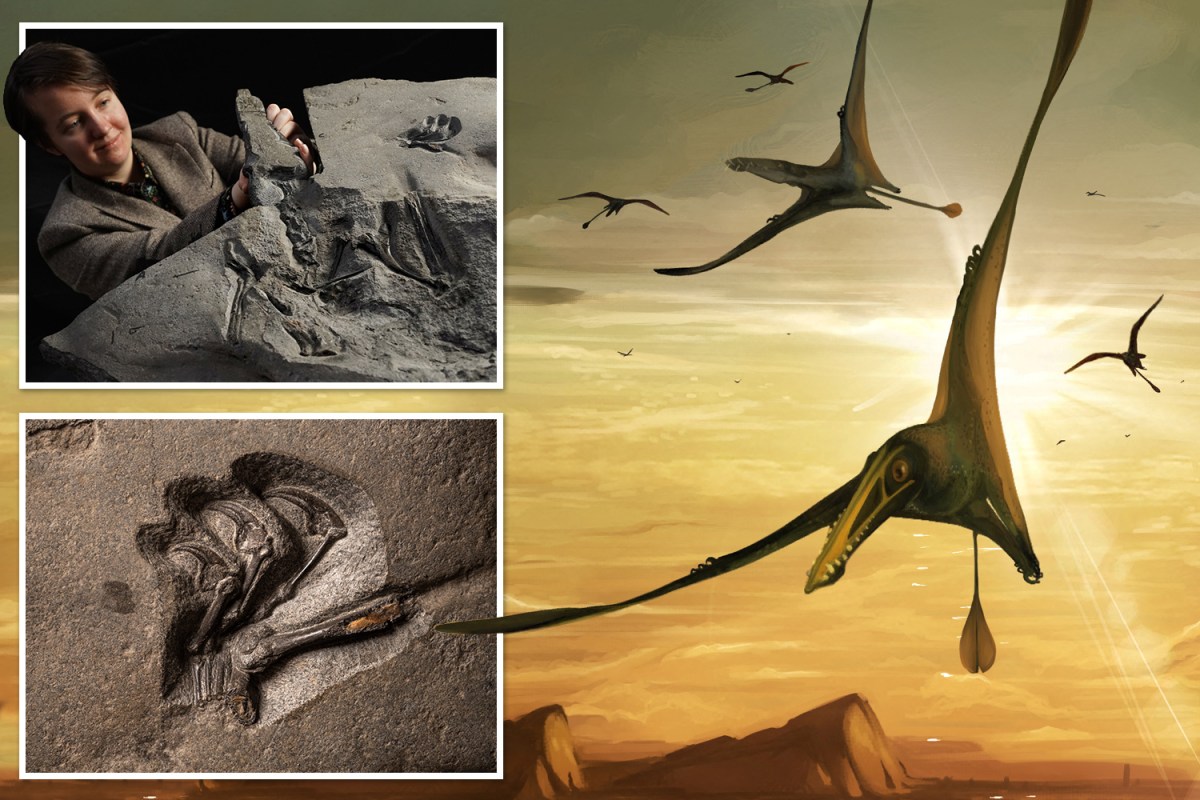 A GIANT flying reptile that dominated the sky 170 million years ago has been unearthed on the Isle of Skye.

The terrifying beast, which had rows of “self-sharpening” teeth and an 8ft wingspan, is the biggest Jurassic pterosaur ever found.

Its fossil was spotted on a remote beach by Amelia Penny, a student at the University of Edinburgh.

A team then faced a frantic race against time to dig it up before the tide washed it away. The new species has been given the Gaelic name Dearc sgiathanach, which translates as “winged reptile”.

Professor Steve Brusatte, from the university’s school of geosciences, called it “pristine and immaculately preserved” and said seeing a flock of them “would have been like something from an Alfred Hitchcock horror movie”.

He said: “They would have been a spine-chilling sight, swooping down to catch and eat prey.

“It had big, sharp teeth that formed a kind of cage when it closed its jaw – perfect for trapping fish.

“I don’t like being at the seashore when there are seagulls swarming around and they are tiny compared to this thing. A flock of them would have been like something from an Alfred Hitchcock horror movie.

“This is one of the most beautiful, pristine and immaculately preserved pterosaur skeletons found anywhere in the world.

“It is a new species which shows that flying reptiles from the Jurassic era grew much larger than previously thought.”

PhD student Natalia Jagielska said the beast had 24 teeth it would shed and re-grow to keep razor-sharp.

Natalia, 25, of Bolton, said: “This is probably the best British skeleton found since the days of Mary Anning in the early 1800s.

“Dearc is the biggest pterosaur we know from the Jurassic period. It tells us that pterosaurs got larger much earlier than we thought, long before the Cretaceous period when they were competing with birds, and that’s hugely significant.”

The fossil was unveiled yesterday at the National Museum of Scotland in Edinburgh.

But Prof Brusatte, author of best-selling The Rise and Fall of the Dinosaurs, said his team were faced with an “absolutely manic” race to extract the bones before the tide came in.

He said: “Pterosaur bones are incredibly fragile because they are full of air sacs. Some of the bone walls are as thin as a sheet of paper.

“We feared the rising tide would destroy a lot of the bones we had exposed before we had time to get them out. It was absolutely manic.”

The situation was worsened when the researchers were accosted by a well-meaning elderly English couple holidaying on Skye.

Prof Brusatte said: “They thought we were illegally trying to poach these fossils and tried to make a citizen’s arrest.

“As the water was lapping up around our feet, we had to try and convince them we were legitimate and urgently needed to continue working. It was comical and ridiculous.

“It’s the most stressed I’ve ever been during any fieldwork.”