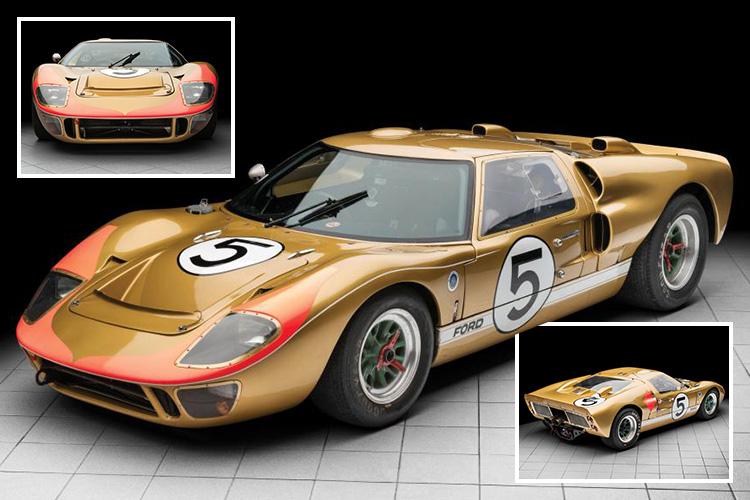 A PRIZED race car is set to become the world’s most expensive Ford if it sells for its estimated £9million value.

The gold Ford GT40 once finished third at the famous Le Mans race and was part of a legendary trio which famously embarrassed Enzo Ferrari at the 1966 event.

It was developed following a bitter dispute between Henry Ford II and the owner of the Italian sports car firm.

Ford wanted to buy Ferrari, but no deal was done and the American firm – famous for making good value family cars – decided to enter racing and beat the Italians at their own game.

The GT40s were designed, engineered and developed under the British Roy Lunn’s direction.

And following a number of setbacks, the GT40 won Le Mans in 1966 as Ford took all three spaces on the podium.

Prior to the race, Ferrari had won every event since 1960, but Ford won the final four races of the decade.

It raced then three more times before being retired in 1967.

It’s now due to be sold by RM Sotheby’s in California later this year.

The auction house has given it a guide price of around $12 million (£9million) which would make it the most expensive Ford ever sold publicly.

Alexander Weaver, car specialist at RM Sotheby’s, said: “If it wasn’t for this car, the history of motorsport as we know it would be very different.

“The sale of this GT40 represents a real chance for any collector or motorsport enthusiast to own a significant piece of history.

“To feature a car for sale that has played such a pivotal role in such a famous race is very important for us as we prepare for the Monterey auction.

“This Ford has been restored to the condition it raced in, which will be a vital consideration for any prospective buyer.

“Few cars can be considered gold standard, but this GT40 is, and will always be remembered as one of the Fords that finally beat Ferrari.”