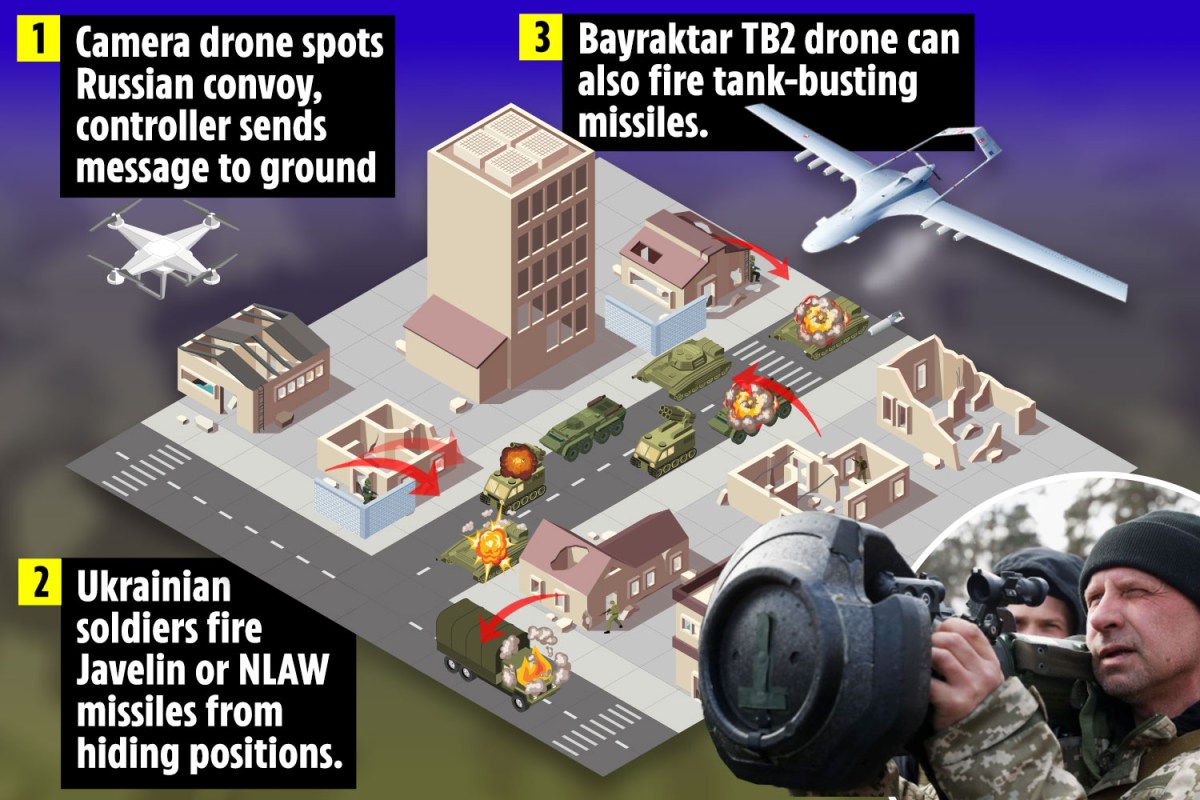 BRAVE Ukrainian defenders have stopped the Russian juggernaut in its tracks – with Putin’s bogged down troops being picked off by lightning fast units after being spotted from the sky.

The US estimates some 30,000 Russian soldiers have been killed or captured since the conflict in Ukraine began four weeks ago.

Ukrainian fighters have defied expectations and halted the advance of Putin’s “tactically inferior” and “completely incompetent” forces – even pushing them further out of Kyiv.

They have been able to fend off the Russian threat by using a deadly mix of drones and well-planned ambushes that have seen tank columns annihilated and invading troops cowering away.

Russia’s invasion has now stalled on all fronts, according to British defence chiefs – leaving many to question whether Putin’s troops are truly up to the task of taking Kyiv.

So far they’ve failed to carry out a “combined arms manoeuvre” using tanks, artillery, fighter jets and infantry, while armoured columns have been caught rolling into towns without essential ground support. 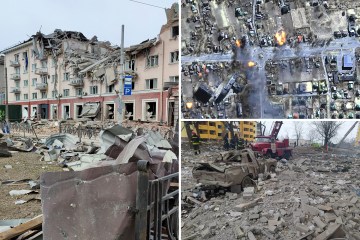 He said the Russians has made the mistake of attacking on too many fronts without having the numbers to do so, leaving them vulnerable to counter-strikes

“They have not been able to concentrate force, a key principle of war,” he said.

“This is one of the reasons why they are being picked off so easily.

“The Russians have made it easier for the Ukrainians.”

Crack troops can then strike with RPGs or other armed drones.

This tactic has worked with deadly precision.

‘PICKED OFF ONE BY ONE’

It showed a Russian ‘Z’ tank being blown to bits as its desperate crew ran for their lives.

At least five fireball blasts hit the war machine after it was hunted down in the besieged city of Mariupol.

Another video showed how a drone pinpointed a Russian troop truck from above before a soldier blasted it with a rocket launcher from a hidden position at the roadside.

It is the latest of hundreds of tanks and armoured cars that Ukraine claims to have destroyed during Putin’s stalled invasion.

In another attack, a well-armed Russian column is ambushed and blown to pieces using lethal anti-tank missiles.

The tank can be seen being hit and exploding into flames in the aerial strike.

According to Ukraine’s defence ministry, the dead officer was Colonel Andrei Zakharov, the commander of a tank regiment.

And the losses keep piling up after a counter-attack in the Russian-held city of Kherson destroyed 10 aircraft, according to a tweet by the Kyiv Independent.

On March 2 and 3, Russian troops experienced “one of the most comprehensive routs” in Voznesensk nearly Mykolaiv.

According to analysis by the Wall Street Journal, Ukrainian troops “eliminated most of a Russian battalion tactical group,” killing an estimated 100 soldiers and capturing or destroying 30 of 43 tanks.

Military experts say that Putin’s troops could only have ten days to win the war in Ukraine before they buckle.

The Russians have lost as many as 450 tanks and more than 1,400 armoured personnel vehicles, according to the Ukrainian Defence Ministry.

US and British intelligence claim that 30,000 Russian troops have been killed or captured since February 24.

A senior UK defence source and the former commander of US forces say the game could soon be up for Russia.

“Ukraine has Russia on the run,” the source told the Daily Mail.

“It is running out of manpower and running out of energy. As long as we keep pressing they’ve got ten to 14 days before reaching their culminating point.

“That’s when the strength of Ukraine’s resistance should become greater than Russia’s attacking force.”

Meanwhile, retired US army General Ben Hodges has predicted Russian forces will be unable to continue their assault on Ukraine 10 days from now – if Ukraine can hold out that long.

“Russia’s decision to transition to a war of attrition – they’re smashing cities, putting civilians on the road because of fear of being murdered – they need three things to do this,” Gen Hodges told MSNBC.

“That means they won’t be able to continue the attack.”

It comes as the Ministry of Defence claim that as much as 10 per cent of Russia’s combat power has been wiped since February 24.

Air Marshal Edward Stringer, former director of operations at the MoD, told The Times: “A rule of thumb is that once you’ve lost about 10 to 15 per cent of your combat force you are combat ineffective.

“Once you have taken that many casualties you have lost your fighting power; you can consolidate, perhaps, but you cannot progress the attack.”

He said Russian troops were worn out and “close to being technically decimated”.