Latest UK NewsThe latest breaking news from the UK
Home Health I have flashbacks of being butchered during my C-sec after anaesthetic wore...
Facebook
Twitter
Pinterest
WhatsApp 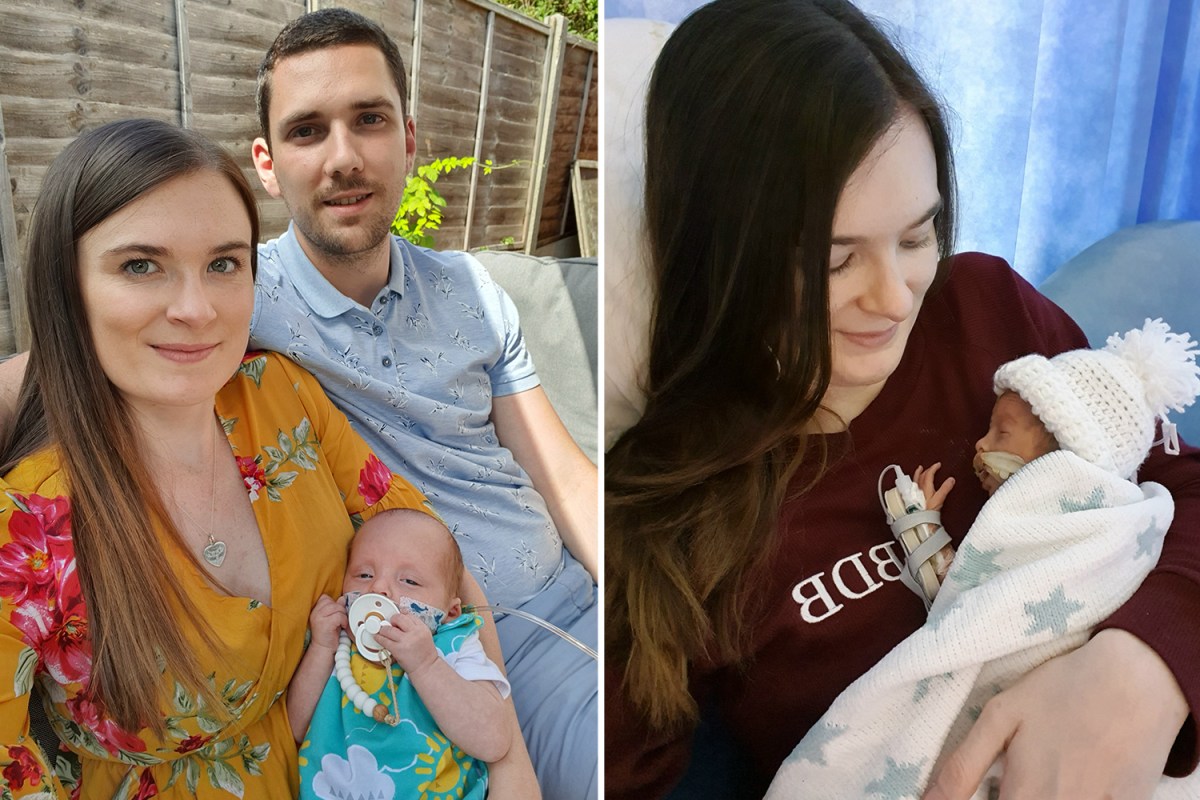 A MUM felt like she was being “murdered” when anaesthetic wore off during her C-section.

Beth gave birth to her baby boy Eddie on April 3, 2020, just after the first lockdown came into force.

Twenty months later the baker is still plagued by flashbacks of being on the operating table.

Vivid flashbacks can cause a person to feel like they’re going through their trauma again, including the physical sensations.

During her C-section, Beth screamed in agony that her spinal anaesthetic was no longer working, suffering pain so severe her vision went black.

After nine long minutes of a living nightmare, Beth, of Colchester, Essex, was finally given a general anaesthetic.

But just before she closed her eyes she was convinced she and her baby were dying, as she heard midwives say her baby was “blue” and not breathing.

Speaking of her flashbacks, Beth said: “Sometimes I have short-lived flashbacks that are more like panic attacks.

“I literally think I am back there. I can’t breathe, I’m sweaty and screaming.

“Other times I’m more aware they are happening, and they can go on for hours. It might start at night and I’ll watch the sun rise.”

Birth trauma can be triggered by life-threatening childbirths, including C-sections, lack of staff care or a person’s newborn being very sick.

Beth was already mum to Vinny, now four, when she found out she was pregnant with Eddie in October 2019.

She was still mourning the recent loss of her second-born child, who sadly died five days after he was born premature in 2019.

Beth had a complicated pregnancy with Eddie and went into labour at 28 weeks.

She drove herself to the hospital with agonising contractions – a drive she says she can no longer do without feeling anxious.

But at the hospital, she says a midwife refused to believe she was in labour and missed signs on Beth’s scans showing her unborn baby was distressed.

Beth said: “They didn’t seem to take me seriously. They put me in this side room on my own. I asked for pain relief and was refused it.

“She [the midwife] just kept dismissing it and saying I wasn’t in labour.

“Because I had already lost a son, I really felt I wasn’t being listened to and I’d lose another one. I felt so out of control.”

Beth was suddenly rushed into an emergency C-section when a consultant finally scanned Beth and realised the baby’s heart had stopped beating.

I was lying there, unable to move, feeling like they were butchering me. But no one seemed to believe me

Beth, whose husband Jack, 28, arrived for the birth in the nick of time, said: “We got into theatre and it just felt so chaotic.

“Everyone was shouting at each other and a midwife kept saying, ‘We need to get the baby out now because the baby’s heart is gone.’

“When they first started cutting I was fine. But I thought it was taking a long time and I was thinking, ‘Why haven’t they pulled my baby out yet?’

“It suddenly occurred to me they were doing resus behind me. They said the baby was lifeless and needed more adrenaline.

“We didn’t hear him cry, we just heard them saying he was blue. We were just looking at each other in shock.”

During this time, Beth’s anaesthetic started wearing off as the surgeon dealt with a bleeding issue in her uterus.

She said: “It was the most excruciating pain, my vision went.

“I felt like I was suffocating with the mask. I couldn’t cope. I said, ‘You’re killing me!’

“My husband didn’t know what to do and looked terrified.

“I was lying there, unable to move, feeling like they were butchering me. But no one seemed to believe me.

“When I went under I thought, ‘I’m not going to wake up again’. I really thought at that point my baby was dead and I would then die.”

Beth woke up in what she described as a “store cupboard” used to try and maintain social distancing on the wards of the hospital.

But woozy from pain medication and anaesthetic, she feared she had been put there because her baby was dead and she was to blame.

“When I could speak I asked these medics wearing PPE where my baby was and they couldn’t answer. They said they didn’t know.

“To me that was because they didn’t want to tell me the bad news.

“When they said, ‘Your husband is waiting upstairs,’ that’s when I knew he was dead because they were waiting for me to have support from Jack to tell me.”

A failure in communication meant Beth and Jack were separated for at least three hours and neither had been told if their baby was alive, or where he was.

Beth said: “Thankfully the midwife realised there was a lack of communication and went to NICU. It took an hour for her to come back and say he’s alive.”

Because Eddie was born at least 12 weeks premature, he needed to stay in hospital for another four weeks to build strength.

Beth said the first time she saw her son she felt “physically repulsed”.

She said: “It sounds awful. I felt I was living in a horrid nightmare where people were trying to kill me and give me a baby that wasn’t mine.”

Beth had to stay on NICU for four weeks without her family, during which time she said there were “dark moments” when she thought Eddie would die.

When he eventually came home, he was diagnosed with a chronic lung disease, for which he needed oxygen, and was classed as clinically extremely vulnerable during the pandemic, meaning Beth was unable to see any family.

Beth said her mental health “wasn’t getting better” and anyone she reached out to dismissed her.

She suffered flashbacks of her C-section daily when she came home.

“I tried opening up to a midwife. I tried referring myself online, I went to my GP, spoke to my health visitor, and I was just always dismissed.

“I was offered antidepressants, which I knew wouldn’t help PTSD, and one doctor asked if I was just asking for attention, and I was so shocked but should have said, ‘Yes, actually I am’.”

Beth’s flashbacks are sometimes triggered by looking at Eddie’s face, if someone touches her C-section scar, and mostly, blue face masks.

Describing one of her worst flashbacks, Beth said: “I was walking back from dropping Vinny off at nursery, with Eddie and all of a sudden I couldn’t physically move.

“For about 45 minutes I just couldn’t move. I was just staring at Eddie, and couldn’t get out. It was just constant replaying the pain.

“It’s like I’m living two realities, half is submerged under water and the other is a nightmare.

“On the surface I can see my kids are there, and my life, but I can’t break through the surface and I’m stuck under.”

A survey for the Birth Trauma Association in June found six in 10 people are unaware that birth can lead to PTSD.

As Eddie’s birth nears to two years ago, Beth is still unable to get treatment, saying she has not been deemed severe enough to fit the criteria.

Her flashbacks have eased to a couple per week and she is learning to manage them herself with the help of forums, blogs and podcasts.

Beth said: “I’ve given up trying to seek support. I’ve learnt to get out of the flashbacks more quickly now. But sometimes I am too far gone or caught off guard.”

The 4 symptoms of PTSD in new mums

The Birth Trauma Association says there are four main symptoms of birth trauma: