The 49-year-old has revealed how she had her doubters when she swapped careers, but she didn’t care as she wanted to prove to herself she could do it.

Speaking to adult film producer Holly Randall on her Unfiltered podcast about THAT day on set, she said: “It put me on the map in some weird way.

“It’s sort of like one of those things where people remember you for something but they don’t always know what it is.

“It was my idea, that’s what most people don’t know. I don’t regret doing it, I think it’s actually really funny.” 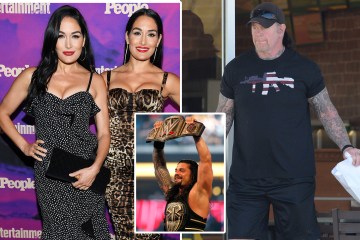 Jasmin continued to perform in adult films until 2000, before she made the move into wrestling where she enjoyed a stint in ECW.

Hardcore wrestling fans may remember her match-up with Francine, before the pair reignited their feud in TNA.

Eyebrows were raised when she changed careers, though Jasmin has declared how she didn’t care how people were doubting her abilities.

In an interview with Scott Mitchell of PWMania.com, she said: “At first, I wasn’t sure what to expect. I had a lot to prove to myself more than anyone else.

“I started wrestling with Sue Saxton and Mando Guerrero, they taught me how to wrestle and helped me a lot along with the Dudley Boys.

“I didn’t know where it was going but I knew it would be somewhere positive.”

“At the end of the day, I was only there to prove something to myself, nobody else.

“I just kept going about what I was doing and let everything go in one ear and out the other.”

Jasmin offered to get back inside the ring last year when she called out rapper Machine Gun Kelly where she vowed to “beat the s*** out of him”.

What time does Selfridges stores open during Black...
Business

JOHN TERRY and Wayne Bridge are set for...
Soaps

THE long-standing Walford resident packed her things and...

What time does Selfridges stores open during Black...
Business

JOHN TERRY and Wayne Bridge are set for...
Soaps

THE long-standing Walford resident packed her things and...
Sports

DIY guru Phill Wyatt has shaved hundreds of pounds off his energy bills by doing a number of quick fixes around his home. He...
Read more

JOHN TERRY and Wayne Bridge are set for an awkward reunion as they are staying in the same hotel for the World Cup. The...
Read more