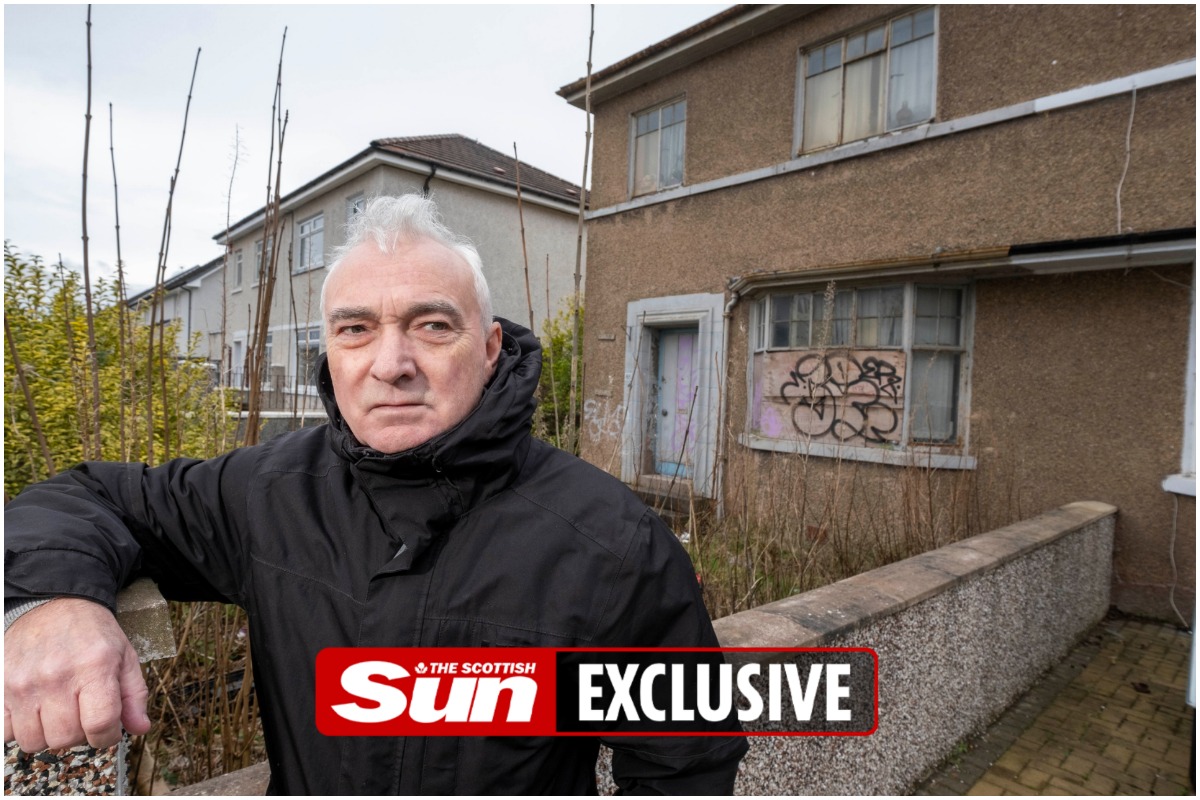 A Grandad has slammed his neighbour for allowing a semi-detached £200,000 property to become a graffitied, vermin-infested hovel – while putting off buyers for his own place.

Frazzled Peter Docherty, 66, says the home has been abandoned for seven years by Edward Boyce, 69, leaving it to the mercy of vandals and animals.

A family of foxes live in the jungle-like garden while squirrels and pigeons have been seen going in and out of the top floor window.

Vandals have invaded the home and scrawled it with graffiti while teeny thugs regularly chuck stones at the windows that haven’t been boarded up.

It’s believed the inside of the property in Croftfoot, Glasgow, is teeming with bric-a-brac and beasts that poses a fire risk while fly-tippers have begun dumping rubbish in the driveway.

Retired joiner Peter, who lives with wife Ellen, 65, wants to sell his home to downside but fears the state of the Boyce’s property will drastically reduce the value.

He said: “It’s a nightmare – we want to sell but who’s going to buy a house next to that tip?

“I’ve asked Edward umpteen times what he’s going to do and all I get is excuses.”

Ellen said: “The foxes are now bold as brass in the back garden because nobody can get rid of them.

“We’ve seen pigeons and squirrels going in and God knows what else is living in there.

“The home must be 70 years old and it’s never been touched – people joke and call it the ‘original showhouse.’”

The couple own three Maltese terriers but are scared to let them out in case they are prey for the six foxes that have set up home next door.

Peter even had to erect a bigger wooden fence to keep the brambles out of his property.

The couple also have to put up with neds attacking the house next door – and the potential fire risk the near-derelict home poses.

Ellen said: “The postman has even given up trying to get mail in the door because it’s that full up and people are dumping rubbish at the front.”

The frustrated couple have contacted the council but they say because it’s owned, there’s nothing they can do.

Last night Mr Boyce, from nearby Toryglen, said: “I wanted to renovate it but I don’t have the means to do it at present.

“I know I have to get something done so I’ll act on it.”

Mr Boyce said he took over ownership of the home in 2015 after his mother died but has never lived in it – and hadn’t seen the property ‘recently.’