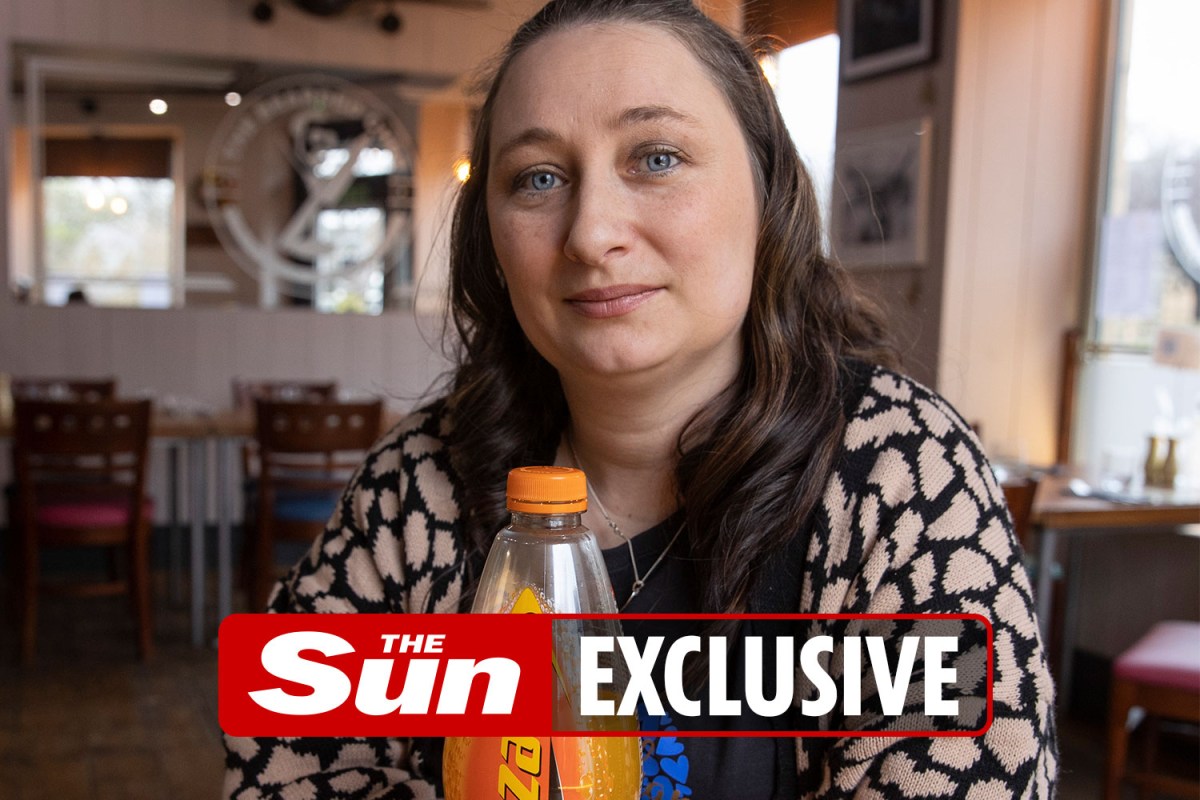 AT the height of her addiction, Kayleigh Judge would shun food and lash out at others if she didn’t get her fix.

But Kayleigh’s problem wasn’t drugs or alcohol – it was energy drinks.

At her worst, the mum from Moray in Scotland would consume 15 litres of Lucozade Orange a day – a habit which she believes has left her with dangerously high blood pressure.

And she admits: “I was as addicted as any drug addict.”

Kayleigh, 36, has banned her teenage sons, Tyler, 16, and Lee, 14, from having drinks like Red Bull and Monster in the house – and would like to see a total ban on the products.

The restaurateur tells UK Times: “Often, I’d pick up six 500ml bottles on the way to work, then six more at lunchtime and six more on the way home – then I’d work my way through six 1-litre bottles in the evening, totalling 15 litres in 24 hours!

“I was in my late twenties, my first marriage was ending and I had two small kids to look after.

“It was a way of coping with all the stress and it became a meal replacement and my best friend.”

She can now see that she suffered withdrawal symptoms.

Kayleigh says: “If I didn’t get my fix, I became a truly nasty person and would lash out.

“I’m sure my energy drink addiction was a significant contributing factor in my relationship ending.”

Energy drinks typically contain 32mg of caffeine per 100ml, roughly the same amount as a cup of filter coffee. Lucozade Energy has around 12mg per 100ml.

At 30, Kayleigh was diagnosed with chronic high blood pressure.

She was put on medication to lower it and decided to go “cold turkey” by swapping Lucozade for other carbonated drinks like Diet Coke and Fanta.

She still has the occasional bottle of Lucozade as a “coping mechanism”.

Kayleigh says: “It was one of the hardest things I’ve ever done.

I’m sure my energy drink addiction was a significant contributing factor in my relationship ending… I don’t see why these drinks exist. They’re hugely harmful

“I won’t stock it in my restaurant or let my sons have it in the house.

“We have so many arguments because they see energy drinks as cool.

“Lucozade is marketed as a ‘sports drink’ when it’s just as dangerous and addictive as Monster or Red Bull. Any kid can buy it from a shop.

“I don’t see why these drinks exist. They’re hugely harmful and I wish I’d never started on them.”

A recent report shows a third of UK children – mostly young teens – drink at least one energy drink a week while some are having them almost daily.

The authors of the report in the British Medical Journal (BMJ) warn those who often consume the fatigue-fighting beverages may suffer headaches and sleep problems.

Its findings back up the government proposals to ban sales of energy drinks to children, a plan first proposed by former PM Teresa May in 2018.

Lead researcher Claire Khouja, from the University of York, said: “Our research has uncovered consistent evidence of links between the regular consumption of these drinks and harmful effects on children’s overall wellbeing.

“These findings offer support for a government policy banning the sale of energy drinks to children.”

A study commissioned by the Department of Health and Social Care suggests boys drink them more often than girls and frequent consumption – classed as five or more times a week – is linked to poorer mental and physical health and worse academic performance.

“Consumption of energy drinks can affect a young person’s mental health and lead to poor diet — but also significantly impact sleep while the brain is still developing, with reduced sleep being further linked to risk of weight gain.”

EU regulations state all energy drinks with a caffeine content of more than 150mg per litre must be labelled “not recommended for children”.

The Government ran a consultation on banning the sales of energy drinks to under-16s in 2018 but decided there was not enough data to justify changing the law.

Gavin Partington, director general of the British Soft Drinks Association, said: “Energy drinks and their ingredients have been deemed safe by regulatory authorities around the world.

“They are legally required to declare ‘High Caffeine Content. Not recommended for children or pregnant or breast-feeding women’ followed by the exact caffeine content expressed in mg per 100ml on the label. We remain committed to supporting the responsible sale of energy drinks.”

The DHSC told Fab Daily a plan to end the sale of energy drinks to under-16s will be set out “in due course”.

Red Bull referred us to Energy Drinks Europe’s research by the European Food Safety Authority including that “the general population of healthy adults is not exposed to any health risk from caffeine if the daily consumption is limited to 400mg.”