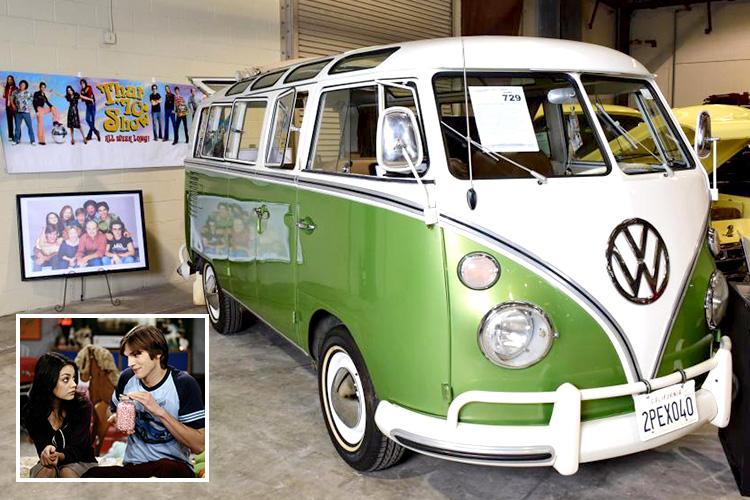 THE iconic Volkswagen campervan from That 70s Show is set to break the world record for priciest VW ever.

The rare ‘Love Wagon’ that appeared in the hit TV series is tipped to beat the current £214,000 record set last year.

Volkswagen produced just over 100,000 Sambas in the 50s and 60s of the popular model that’s a must-have for car collectors.

This 21-window TV classic is now going under the hammer with Barrett-Jackson Palm Beach Auction in Florida, USA, on April 14.

And the auction house is confident the ‘Love Wagon’ will break the world record thanks to its showbiz history.

Craig Jackson, CEO of Barrett-Jackson Auction House, said: “Sambas are the first-generation buses from Volkswagen and there is tremendous nostalgic appeal with people who grew up driving and riding in them.

“This bus is obviously special because it brings a celebrity connection to That ‘70s Show. We’ve sold a number of TV and movie vehicles over the years and they are often very popular.

“We’re adding more VW buses to our Palm Beach docket, well above the number we had in Palm Beach last year, so the market for them continues to be strong.

The minibus is equipped with brand new tyres and an engine and brake system that were both recently serviced.

It also comes with a handbag signed by cast members of the show including Kutcher, Mila Kunis and Laura Prepon, as well as the vehicle title under the name of the show’s creator Mark Brazill.

Craig said: “This bus does bring a celebrity appeal from a popular TV show, which has the potential to increase the value, but you never really know until it’s on the block and the hammer drops.”

“We’ve seen some really big numbers for these buses in the past few years.

The auction house has mainly sold these buses to the baby boomer generation, but expects some younger bidders considering the fanbase of the sitcom.

Craig said: “They have been popular with baby boomers, but the show is also popular among the younger generations who also like the retro concept, so I wouldn’t be surprised if a Gen X or millennial bidders jumped in.”