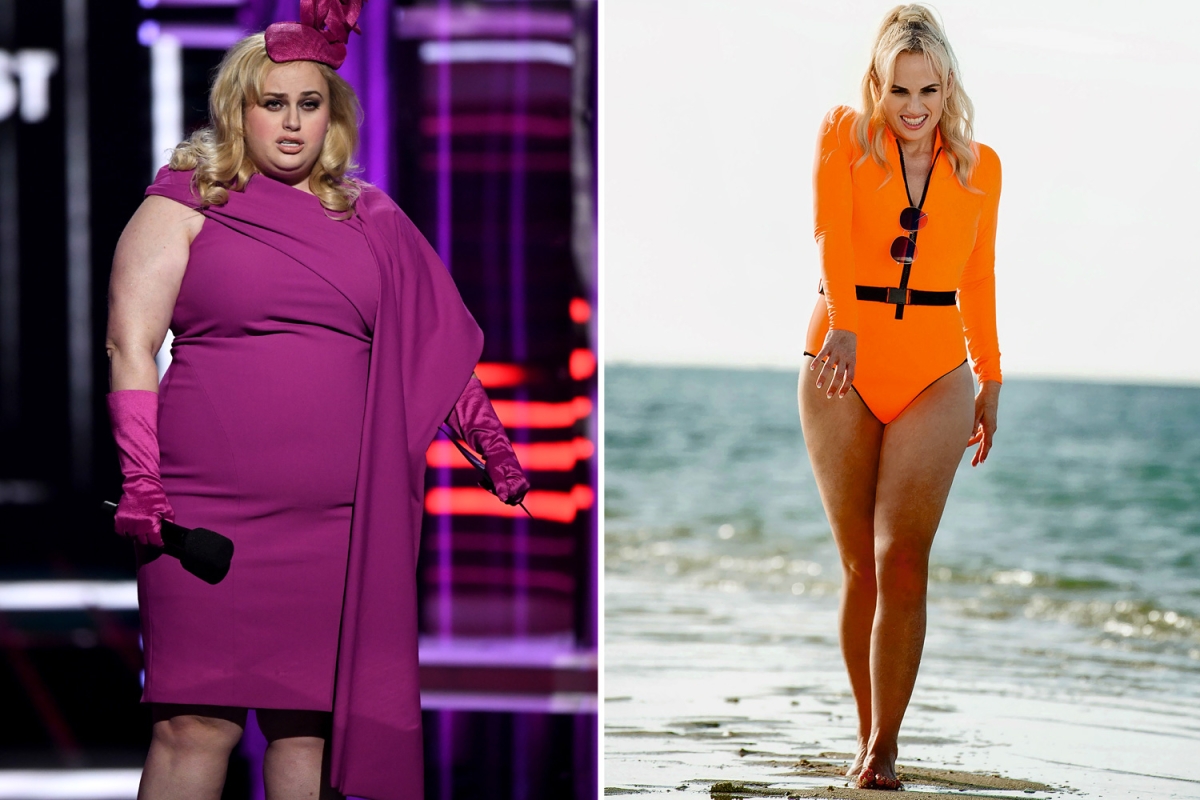 WHEN Aussie star Rebel Wilson announced on Instagram that she’d be hosting the EE BAFTAs tonight, she quipped: “I know I’m not going to be funny because I am no longer fat.”

Compared to how she looked early on in her career, you might not even recognise the comedian at first.

In 2020, Rebel, 42, famed for playing self-deprecating “Fat Amy” in the Pitch Perfect movies, announced she was embarking on a “year of health”, setting herself a target weight of 11st 8lb.

She’s been on a transformational journey ever since, shedding around 51/2st and becoming stronger than ever, with a little help from personal trainer and new chief of athletics at F45 Training, Gunnar Peterson.

The 59 year old trains the likes of J.Lo and Kim Kardashian at his Beverly Hills gym.

So how did Rebel do it? We asked Gunnar for the inside track…

Gunnar, what’s it like getting in the gym with Rebel?

She is a delight. She’s driven, she’s fun to be around, as you can imagine, and she works hard. She’s Rebel Wilson, we understand that, but she’s like every other person in that the demands on her time are sometimes overwhelming. And her work schedule is not enviable. I work a lot and then I look at Rebel and I go: “Good lord, this woman!” She’s producing, she’s writing, it’s a lot. She’s non-stop. She was in here yesterday. Kudos to her for finding time to fit fitness in.

Celeb or not, carving out time to exercise can be tough. What’s your advice on making it part of your routine?

Prioritise and put it in ink, not in pencil, so it’s not something that can be moved on the schedule. Don’t have it as your TBD, have it as the anchor and let other things fit around it. When you’re making another appointment, if it encroaches on your exercise, say: “That’s not going to work for me at eight, can we do it at nine?”

When Rebel’s in the gym, how does she approach training?

It’s an athlete mindset – she’s getting it done. And every day doesn’t have to be about personal records, it just has to be something. I love that, because that’s a very realistic and sustainable approach to fitness.

What does a typical training session with her look like?

There’s no such thing as typical. The workouts I do here are similar to F45 (the global fitness community that specialises in high-intensity group workouts). You’re not just working on one piece of equipment like a treadmill or a bike or a rower – you’re working in different planes of motions (moving different sections of your body up, down, side to side and backwards/forwards) – the movements are functional, they will serve you in real life.

It’s a gentle scientific mixture of HIIT cardio, resistance and movement patterns – and you’re going to see improvement across your life. So you’ll be on the treadmill, squatting, pushing a sled, doing dumb-bell rows. Think two to three sets of eight to 12 reps across five different exercises.

Do you target specific areas, like belly fat, or focus on the whole body?

It’s full body. There’s not a ton of work done in isolation, just because it’s not good bang for your buck, time-wise. You might think: “I have time to do weights, but I can’t fit in cardio,” or: “I have time to do cardio, but I couldn’t do any mobility or flexibility.” In here, you’re getting all that.

Rebel is two years in, but where do you start with people just beginning their weight-loss journey?

Don’t try to change too much at once. If you try to overhaul the whole thing, you’ll upset things and it’s less likely to stick. You encourage other good, healthy, maintainable changes, but you don’t say: “OK, you’re going to train six days a week, you’re going to eat this very strict diet, you’re not going to have any alcohol or desserts, you’re going to get eight hours of sleep, you’re going to take all your stress away.” That just doesn’t work.

It’s an athlete mindset – she’s getting it done. And every day doesn’t have to be about personal records, it just has to be something. I love that, because that’s a very realistic and sustainable approach to fitness.

If you’re doing nothing, I’m happy if you start by training once a week. But then you have to add to that. And it should be based on a programme. It shouldn’t be: “I go all-out once, and then don’t do anything for seven days.” That’s not going to get you where you want to go. It’s not doing two, three, four or five hours in the gym.

You say: “Let’s get a couple of workouts in,” and then on your own, find time to walk. Step outside your front door, turn left or right, walk 20 minutes, turn around, try to get back in less than 20. It’s about exercises that elevate heart rate (aim for between 50% and 70% of your max heart rate), plus HIIT intervals (eg, 30 seconds on, 30 seconds off for six to eight minutes on a VersaClimber machine, or 15 kettlebell swings).

How do you keep people motivated once they’ve achieved what they set out to do?

The quote is: “You’re either striving to get better or allowing yourself to get worse” – there’s no such thing as staying the same. There’s never such a thing as reaching a goal, either. You may hit certain numbers, but that shouldn’t mean that you stop.

Once that becomes your normal, you make changes in whatever the next component of your health is lacking. Some people get to sleep [easily], so we don’t have to tweak the sleep. Great, we’ll add workouts. And now let’s look at your diet, stress levels, hydration or if you’re a smoker. There are so many things to attack, but let’s do them in a way so you don’t feel like your whole life’s being undermined. It’s slow upgrades.

Rebel is under a lot of scrutiny, especially over her weight. What would you say to someone who feels anxious about going to the gym or how they’ll look in Lycra?

With most fitness endeavours, you don’t know what everybody else is going through. Everybody’s going through their own thing. They’re not judging you.

Is getting in shape a mental challenge as much as a physical one?

I think it’s fortifying it, right? You get through certain things that are arduous and then you recognise: “Wow, I did that. And I can do that. And I can keep on doing that.”

How do you want Rebel and everyone else to feel after a workout?

I like watching people become empowered and their competence go up. I like watching them recognise that they do have control over how they look and feel. I have a sign by the door in my gym. It says: “You got better today.” I want everybody to walk out feeling great.

Alongside working out, Rebel decided to “avoid sugar and junk food” and followed the Mayr Method, which is high in veg and protein and involves focusing on chewing food more and eating slowly.

Rebel told UK Times: “There’s no real simple answer to it. I’ve been trying a lot of different things to be healthy.”