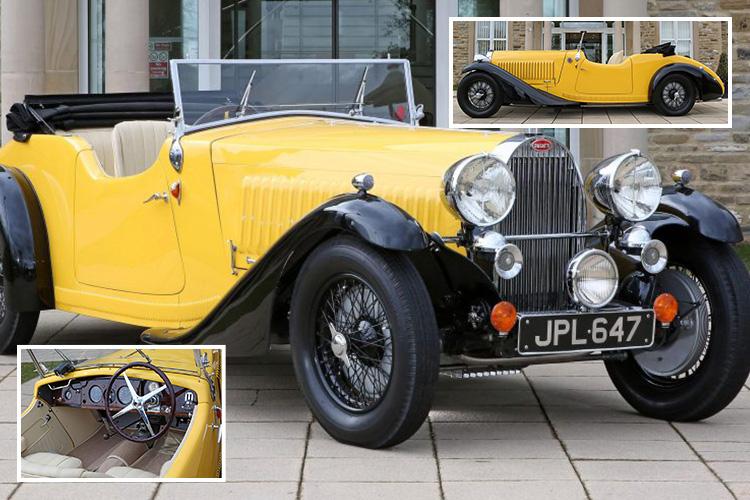 AN incredibly rare vintage Bugatti is up for sale for the first time in 40 years – and experts have tipped it to fetch £1million.

While Bugatti made 739 Type 57s between 1934 and 1939, the sportier Grand Raid edition was incredibly exclusive.

This particular classic was originally delivered to Bugatti’s London Depot, along with three others in July 1935, before being fitted with its four-seater Grand Raid body built by Corsica Coach Builders.

The firm were among the most highly respected coachbuilders of the time and built bespoke bodies for Bentley, Delage, Invicta and Mercedes, as well as Bugatti.

The next 10 years of its history are unclear but it was eventually registered with the Department of Transport in April 1944.

Since then it has had a string of owners, but has changed hands only twice since 1978.

The tourer has recently had both its engine and coachwork restored by leading specialists, making it completely driveable.

It has a yellow body with black wheel arches, polished chrome trim and a black convertible roof.

The interior is decked out with four cream leather seats, a polished wooden dashboard and a vintage brown steering wheel.

Fitted with a restored 3.2-litre eight cylinder engine, the Grand Raid is capable of producing 160bhp, and comes with a four-speed manual transmission.

One of the rare survivors of the small Grand Raid range, the yellow motor will go under the hammer with Tennants Auctions on May 13.

Jeremy Pattinson, managing director of Tennants, said: “I am delighted to include the fabulous Bugatti in our specialist Motor Vehicle & Automobilia Sale.

“The car has been consigned by a long existing client of ours.

“As such it has already attracted significant interest from many admirers but also serious potential buyers.

“I expect UK and international bidders to compete for this rare Bugatti.”