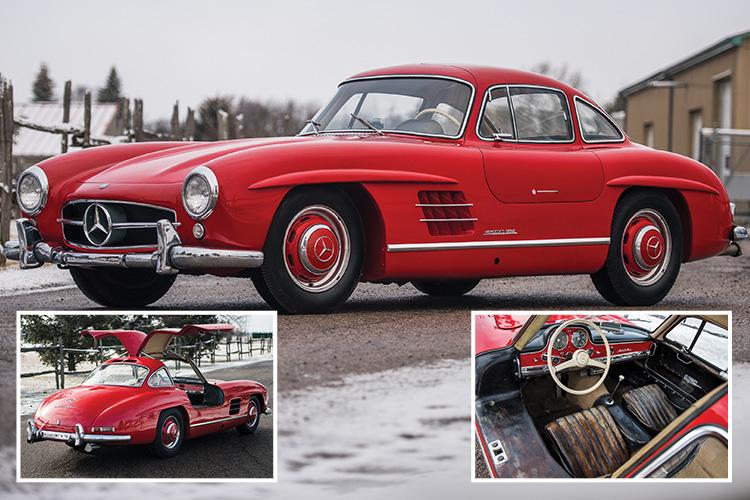 AN INCREDIBLE 1950s Mercedes Gullwing has sold for a whopping £830,000 – and all the profits are going to charity.

The classic 1957 300SL Roadster sold at the recent RM Auctions Fort Lauderdale sale, with the former owner donating 100 per cent of the proceeds to his local YMCA organisation.

Selling for more than $1million, the money will go towards renovating the men’s accommodation centre in Jackson, Michigan.

The motor itself is one of just 73 ever built, and was offered up for sale by the owner who had kept it in their possession since 1968.

The classic two-door coupe – with the iconic lift-up doors – is fitted with a three-litre six-cylinder engine, giving it a powerful 240bhp output.

And despite its age and performance potential, the model has been kept in near-mint condition, with only minor restorations required.

The Gullwing made up half of a pair of impressive Mercedes 300 SL models to sell at the auction.

A 1962 300 SL Roadster was actually the most valuable car to sell on the day, with the highest bidder committing just over £1million to become the new owner.

The Roadster had just one previous owner in the last four decades, and had clocked just under 37,000 miles.

The pair of 300 SLs were the first of their kind to both sell for more than $1million at the company’s auction.

Latest classic motors up for sale

Gord Duff, global head of auctions at RM Sotheby’s, said: “We’re thrilled with the results of our Fort Lauderdale sale this past week.

“The increased quality of the automobiles on offer was noticed by clients and market analysts alike, which led to a higher sale total year-over-year, with 75 fewer cars.

“We saw strong prices across all categories, with the deserving MercedesBenz 300 SLs bringing numerous bidders and top dollar in today’s market.”