Latest UK NewsThe latest breaking news from the UK
Home City Breaks Is this the coolest hotel in Madrid? From a rooftop bar to...
Facebook
Twitter
Pinterest
WhatsApp 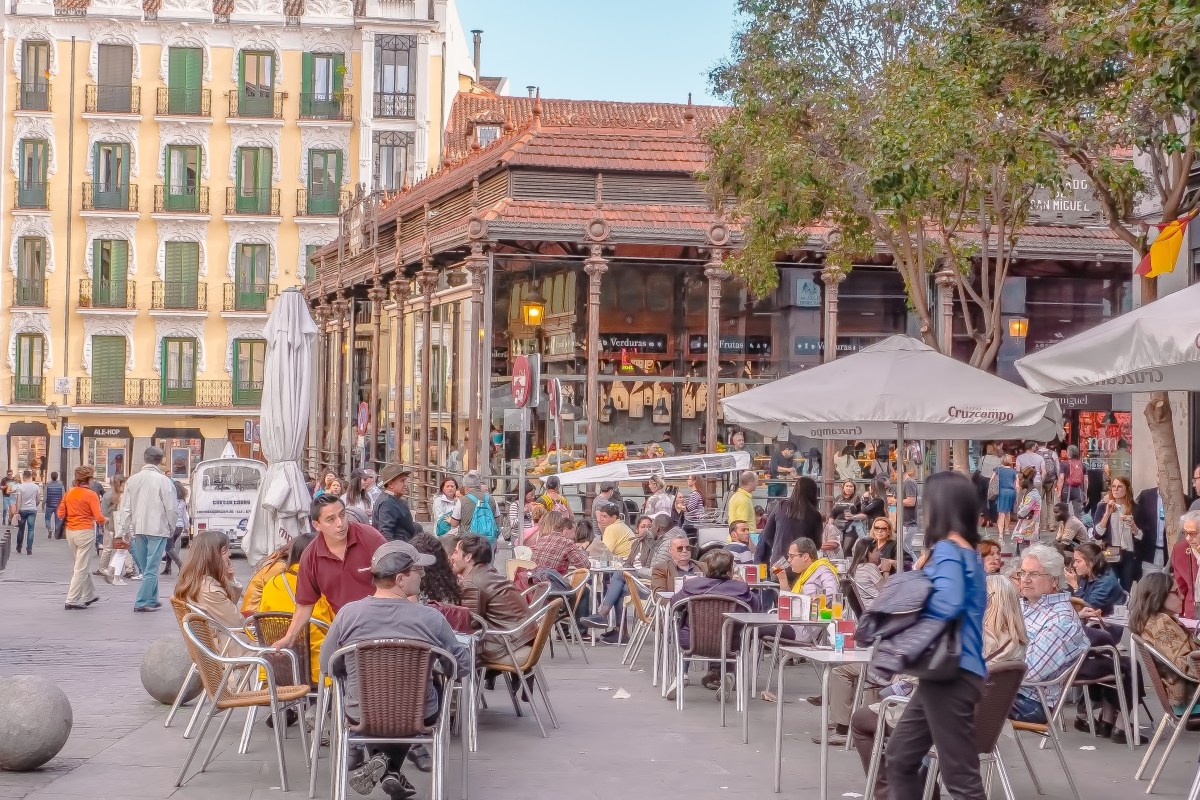 IT was Ella Fitzgerald’s rendition of Autumn In New York that kept spinning in my head as I toured the Spanish capital, Madrid.

Not so ridiculous though as I was strolling in an urban landscape filled with tall buildings, dense crowds and trees covered in brown leaves.

There were also restaurants galore, bustling designer stores and more bars than you can find anywhere outside Manhattan.

Madrid also boasts the original Central Park, El Retiro, a 350-acre green oasis where we enjoyed one of the most pleasant days of early November.

We bumped into numerous live bands as we explored attractions like the Glass Palace, which holds art exhibitions, Rosaleda rose garden and the Parterre Francés, which contains a Mexican conifer that is nearly 400 years old and is believed to be Madrid’s oldest tree.

Then it was on to Central Pond, an artificial lake surrounded by colonnaded monuments owned by the Spanish monarchy until the late 19th century.

We paid eight euros, just shy of £7, to take a boat out and were pleased to find a jazz band playing beside the water as the sun shone brightly, even if the temperature was a bracing 12C.

We were staying at Madrid’s Hard Rock hotel. This new, Spanish offering is decorated with the memorabilia of Latin American artists such as Madrid-born singer-songwriter Antonio Vega.

We found it to be a great base to explore, with a rooftop bar where you can sip a cerveza while taking in the in twinkling lights before heading down to Sessions restaurant on the ground floor.

We ordered Asian-inspired tacos and generously portioned steaks and found the place was as popular with locals as with guests, always a good sign.

The rooms here are equally great – if you fork out for a Rock Star suite, you’ll get all sorts of goodies from a roll top bath overlooking the city to your very own guitar.

After dinner we head out to the nearby Literary Quarter or Barrio de Las Letras, named after the great writer who walked its streets in the golden age of the 16th and 17th century.

There are quotes from writers carved into the cobbles of the Calle de las Huertas and while the area is buzzing day and night, it is after dark that locals come out to play in the many bars and clubs.

At Taberna de la Dolores we stopped for a drink at this traditional tavern, founded as a soup kitchen in 1908.

The historic interior is cosy and we enjoyed glasses of Rioja for just £3, accompanied by tiny tapas dishes to line the stomach, from spicy patatas bravas to the Madrid speciality, fried squid.

On Sunday morning, the Hard Rock served up a sumptuous brunch including pastries, ham, various cheeses and eggs while a guitarist strummed gently in the background  the perfect tonic for my sore head.

A guided e-bike tour of the city was the ideal way to get rid of the last of that hangover. With the bike doing the hard work, our guide captivated us with tales of the city’s history as we cycled the streets.

We ticked off historic gems from the portico-lined Plaza Mayor and baroque Royal Palace and learned what life was like in more recent times under the rule of dictator Franco.

Ella may have sung the praises of New York but Madrid in the autumn is definitely something to sing about.

Thinking of jetting-off to Madrid this Christmas? Find out the travel rules for Spain here and check-out everything you need to know before you fly from our big Travel Q&A

COVID: All UK travellers to Spain over the age of 12 must now be fully-vaccinated at least 14 days prior to arrival.Children under 12 are exempt if travelling with an adult. Current rules require pre-departure test before returning to the UK and a PCR test on or before day 2.

GETTING THERE: Ryanair has flights to Madrid from just £7.99 in January. Fly from Bristol, Stansted, Manchester and Birmingham.

STAYING THERE: Rooms at Hard Rock Hotel Madrid start from 145 euros per night.