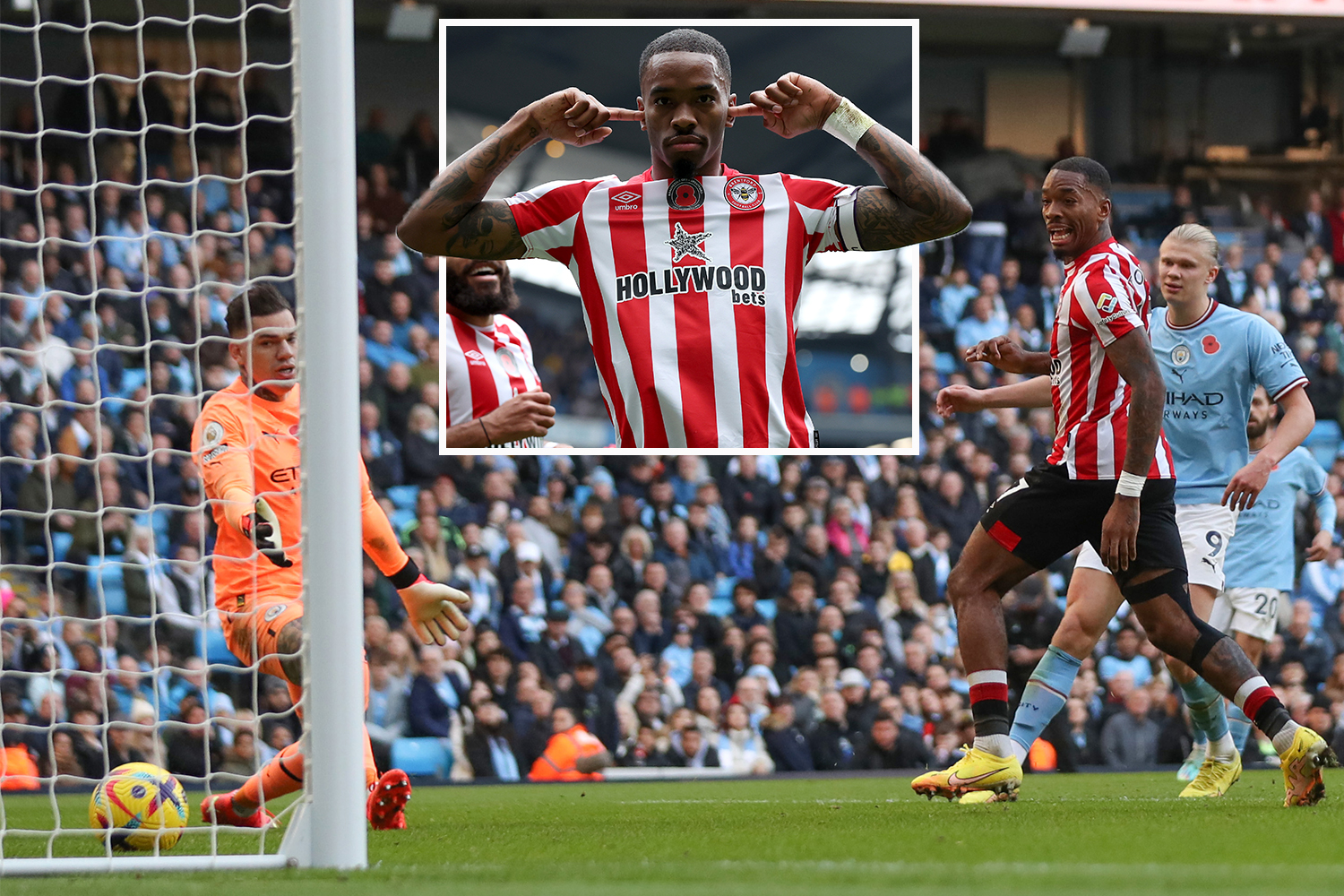 TWO goals to Ivan Toney and two fingers to Gareth Southgate – if only the England chief could leave him out of the squad every week.

For if this is how the Brentford striker responds, his side would be the ones challenging for the title, not City.

Toney, should you have just awoken from a 48-hour kip, was THE shock omission when Southgate named his party for Qatar on Thursday.

So how would the Bees hit-man react? A sulk? A strop? A stomp? Not a bit of it… in fact the perfect example of clinical finishing to dump a side which had forgotten what it was like to lose at home.

Sixteen games on the win for City before yesterday. Thanks to Toney, that’s where it stopped, as well.

A looping header on 17 minutes, and deadly counter thrust on 97…and had it not been for Kevin De Bruyne blocking another on the line, he would have left with the match ball too.

As it is, Toney will be quite happy with three points, never mind three goals. You sense a certain Three Lions gaffer will have squirmed uncomfortably in his chair as he watched on.

No-one can say Brentord didn’t desrve it either. For yes, while City had plenty of chances to have pulled clear before they struck so late on, they hadn’t flinched all day.

And let’s face it, if their first choice line-up can’t beat a Bee team…

This was definitely a first choice one as well, as all bar Erling Haaland are bound for the World Cup next week. City can’t say they weren’t warned of the day ahead, either.

Barely two minutes had gone when Frank Onyeka was staring Ederson in the eyes, but the City keeper got down well to block.

Then Rico Henry showed a lightning burst of speed down the left and Ederson could only paw it beyond the far post, where Toney was lurking.

His square ball was perfect for Bryan Mbeumo, and again the City stopper came up trumps – although really he should have been left without a prayer.

Mind you, on 17 minutes that was exactly the case, as the Bees made it third time lucky.

David Raya sent a free kick from deep in his half and Ben Mee – who so often left here on the back of a caning in his Burnley days – produced a prodigious leap to nod it across goal.

Aymeric Laporte and Toney jumped together, and although it may have clipped the City man first, it came off the Brentford striker second as it looped into the roof of the net.

Cue chants of Southgate, you’re a c*** from visiting supporters incensed at their hero’s omission from the World Cup party.

At that stage the Bees were quite happy planning one of their own. With good reason, as well, after seven winless games on their travels this season.

At one stage City had more penalty appeals than shots on goal, first when Bernardo Silva pounced and as he swept it past Henry, the left back used an arm to block it.

Not even the most forensic of VAR checks gave conclusive evidence, but they were probably just about right in calling it inches outside the box.

Although if they ever gave spot kicks for cynicism, this one would have been a nailed on penalty.

Minutes later and video official David Coote was earning his money again, this time with TWO checks – for Ben Mee grapping Erling Haaland and a Henry challenge on Bernardo.

City finally discovered a route to goal when Kevin De Bruyne’s deft delivery – does he do any other kind? – teed up Phil Foden for a rocket which Raya beat away.

It was clearly just a sighter for the England man, because second before the break an even sweeter connection hauled City level, from a De Bruyne corner.

Normal service about to be resumed then, everyone assumed. And first Joao Cancelo and then Ilkay Gundogan – embarrassingly in his case – went close, it was just a matter of time.

Yet when it came, it was at the other end, as Yoane Wissa and Josh Dasilva combined to tee up Toney for the finish which silenced the Etihad. Or the vast majority of it.

Even time, too, for another counter as Dasilva set him up again, yet De Bruyne of all people had got back to turn his shot to safety.

Now 3-1 really would have been rubbing their noses in it. And Toney had already done just that to Southgate, after all.