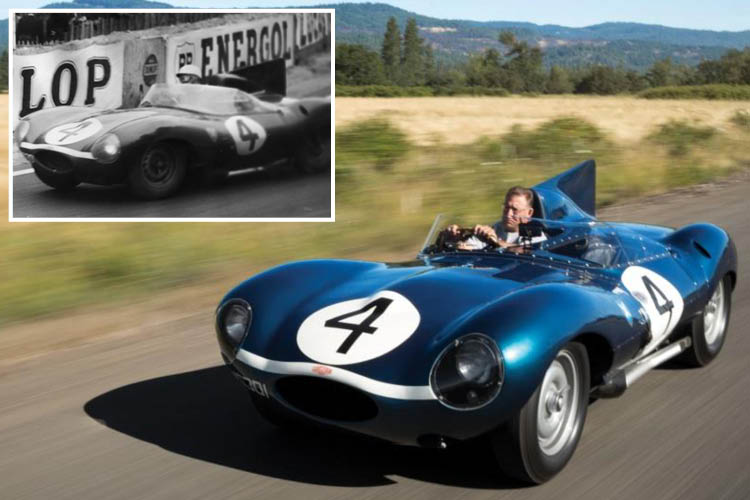 A legendary Jaguar driven to victory in awful conditions at Le Mans is set to become the most valuable British car sold publicly by fetching a staggering £15 MILLION.

The stunning D-Type racing machine took the chequered flag in the gruelling 24 hour race in 1956.

But the car, driven by Ninian Sanderson and Ron Flockhart, wasn’t even part of the Jaguar team, as the drivers were members of the Edinburgh-based unit Ecurie Ecosse.

With the car liveried in the iconic Scottish flag colours and St Andrew’s cross, the two racers drove more than 2,400 miles at Le Mans, completing 300 laps at an average speed of 104mph in the Jaguar, known as XKD501.

Sanderson and Flockhart finished ahead of Stirling Moss and Peter Collins, who were driving an Aston Martin DB3S.

The Scottish team hit a top speed of 156mph down the Mulsanne Straight. This was thanks to a 3.4-litre engine which developed 245bhp. In testing they managed to hit 169mph.

The Jaguar was retired from racing in 1957 and has only had three private owners since – changing hands just once in more than 20 years.

Now its current custodian, an American collector, has decided to sell the car at RM Sotheby’s Pebble Beach sale in Monterey, California, in August.

The auction house is keeping tight-lipped on its estimate, only saying it will “comfortably eclipse” the £9.5 million paid for an Aston Martin last year.

It is likely that because it’s a Le Mans-winning D-Type and the pound has dropped against the dollar, the price will be above £15.5 MILLION ($20 million).

Shelby Myers, car specialist at RM Sotheby’s, described XKD 501 as “without question one of the world’s most significant competition cars”.

He said: “It has an incredible racing pedigree, having won the most grueling contest in sports car racing, the famed 24 Hours of Le Mans, and importantly.

“What’s more is its amazing originality. Pure in terms of body, chassis and engine, there is no other Le Mans winner from this period that is as original as this car.”

Despite the economic uncertainty, the D-Type is still likely to attract a lot of interest from collectors when it is sold next month.

It has the selling point of being a winner of the world’s most gruelling endurance race and has been “fastidiously” maintained its whole life.

RM Sotheby’s is calling XKD 501 the most important Jaguar racing car ever made.

Mr Myers added: “We are extremely honoured to have been entrusted with XKD 501 by its important caretaker for our Monterey sale.”

Last year a Jaguar C-Type, which was also raced by Ecurie Ecosse, sold for £8.4 million.