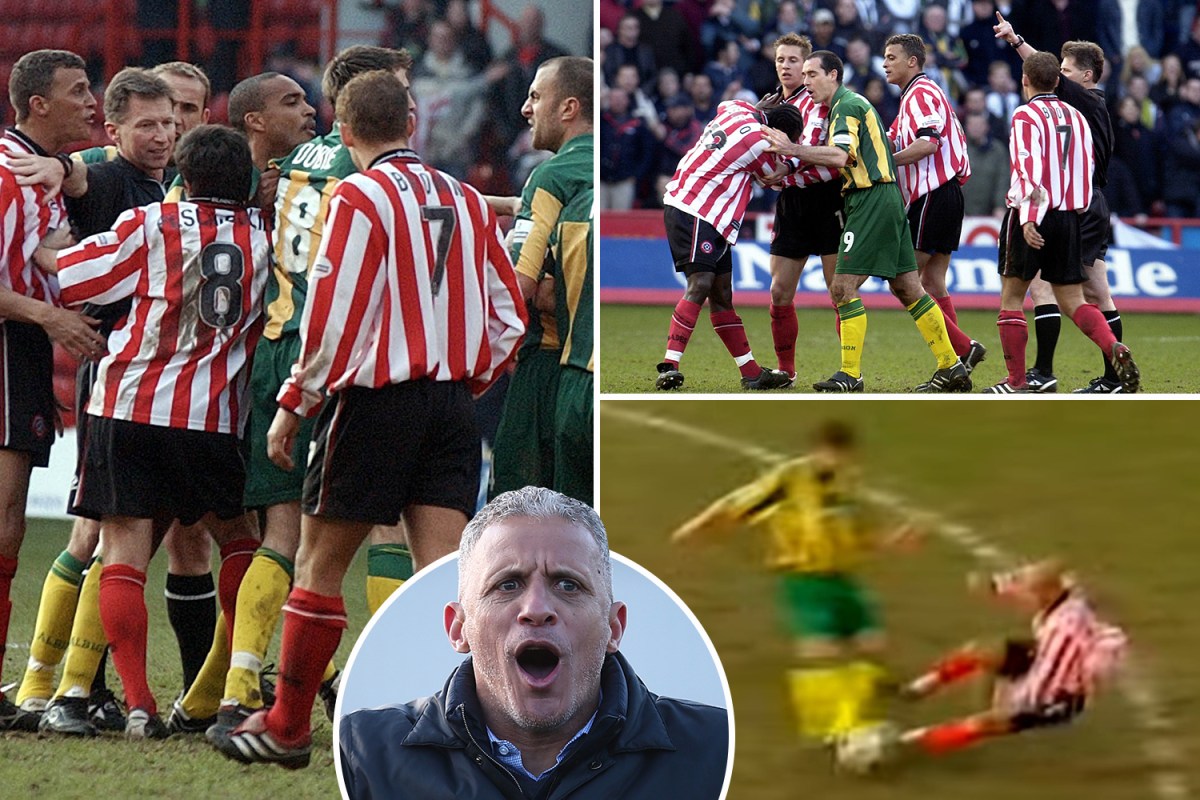 FORMER England international Keith Curle has done more than most in the game – but there is one infamous match that he was involved in that stands out more than most.

The ex defender was captain of Neil Warnock’s Sheffield United when a Championship game against West Brom exactly 20 years ago was called to a halt after it descended into chaos.

It still remains the only professional match in English football history to be abandoned because one team didn’t have enough players to continue.

Reflecting on a piece of football folklore, Curle told Sun Sport previously said: “When you look back on it now, it’s surreal. It was farcical.

“In the dressing room after there was just sheer disbelief about what had happened.”

Widely known as the ‘Battle of Bramall Lane’, United hosted high-flying Baggies who were pushing for promotion under boss Gary Megson.

The season prior, then-Nottingham Forest player Johnson had clashed with Santos leaving him with a fractured cheekbone in which he refused to apologise.

Warnock’s side were off to a disastrous start when keeper Simon Tracey was sent off in the ninth minute for a deliberate handball.

It got worse nine minutes later when Scott Dobie fired the visitors ahead to set up a long afternoon for the Blades.

With 63 minutes gone, McInnes smashed home a terrific strike to give Albion a 2-0 lead.

It proved to be the catalyst to mayhem and Santos instantly spotted an opportunity for revenge – flying into a horror challenge on Johnson leaving him in agony on the turf.

Curle said of the tackle: “Looking back on it now it was horrendous. It was difficult to put into words because there was obvious pent up frustration and resentment from Georges.

“If you know Georges he’s not like that, that’s not him as a person. He obviously felt that the injury caused to him was done with malice. The melee that happened afterwards was mindless.”

A straight red followed and it sparked a huge brawl among both sets of players that resulted in Suffo head-butting McInnes.

Curle recalls: “The game became farcical. It became a game of damage limitation.”

Minutes later it was three when Dobie had his second.

West Brom could have gone on to score a boatload if it wasn’t for what happened next.

Michael Brown walked off the field with injury before Rob Ullathorne apparently pulled his hamstring.

Sheffield United were down to six and referee Eddie Wolstenholme had no choice but to abandon the game on 82 minutes.

Curle adds: “The referee said Ullathorne had to stay on. They were both injuries. Ullathorne got cramp and did his hamstring, Michael Brown tried to be substituted earlier but we didn’t have any subs left, so for fear of injury he just walked off.”

Megson was absolutely fuming with their behaviour and said after the game: “Everybody’s heard it; everybody knows what was going on.”

Curle, who was lucky not to see red for an apparent punch on McInnes, still disputes Megson’s claim to this day.

He also laughed off suggestions that a touchline conversation with Warnock at 3-0 was a ploy to have the game abandoned.

Curle added: “I still get mentioned in the game. A lot ask if it was calculated. Was it set up? No. Was it set up for Warnock to bring Georges on to get revenge? No.

“They got lip-reading experts to try and pick up the conversation I had with Neil. There was a debate about what Neil had said to me, whether I instructed to get another man sent off or get another man off the pitch? It was nowhere near the case.

“I can’t remember what Warnock said. In no way shape or form was it to get the game abandoned.”

The victory was awarded to West Brom while Sheffield United were fined £10,000, Suffo £3,000 with both he and Santos awarded six-game bans.