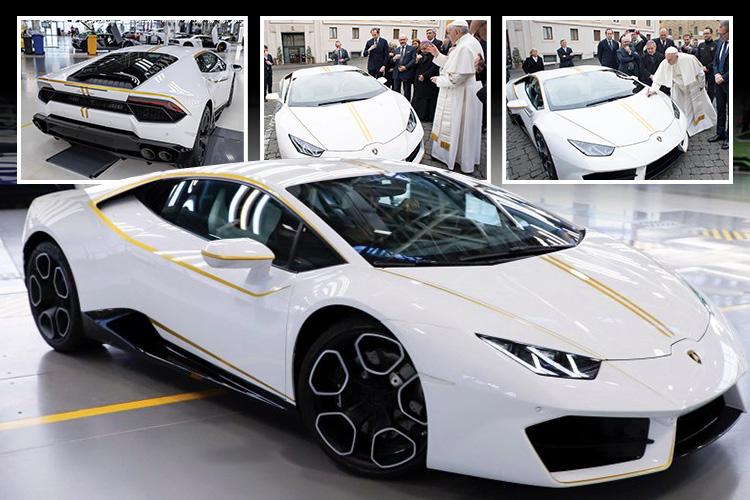 A LAMBORGHINI supercar previously owned by Pope Francis has been sold for an incredible £615,000 – almost four times its original value.

The white Huracan was gifted to His Holiness in November last year, when it was reportedly worth around £160,000.

But the religious leader had little use for the 198mph coupe in the Vatican City, which has a blanket speed limit of 19mph.

After signing the bonnet and blessing the unique motor, the Pope decided to sell it and donate the proceeds to charity.

The two-seater supercar was entered into RM Sotheby’s Monte Carlo sale held over the weekend, where bidding rose up to 715,000 euros (£615,000).

According to the auction house, £430,000 from the sale will go to the Iraqi city of Nineveh, which was besieged by ISIS, while the remaining £185,000 will be split equally among three other charities.

RM Sotheby’s described the Lamborghini as being in “as-new condition” having not been driven since it was built late last year.

The car was finished in Bianco Monocerus contrasted by Giallo Tiberino stripes and detailing in homage to the colours of the flag of Vatican City.

It has been fitted with 20-inch alloy wheels and has leather seats, and still features Pope Francis’ signature on the bonnet.

The supercar is powered by a 5.2-litre V10 engine which generates a whopping 570bhp.

The car is not the first item to have its value boosted by a connection with Pope Francis.

In 2014, the Argentine was given a Harley Davidson motorbike and jacket, both of which were auctioned off for charity.