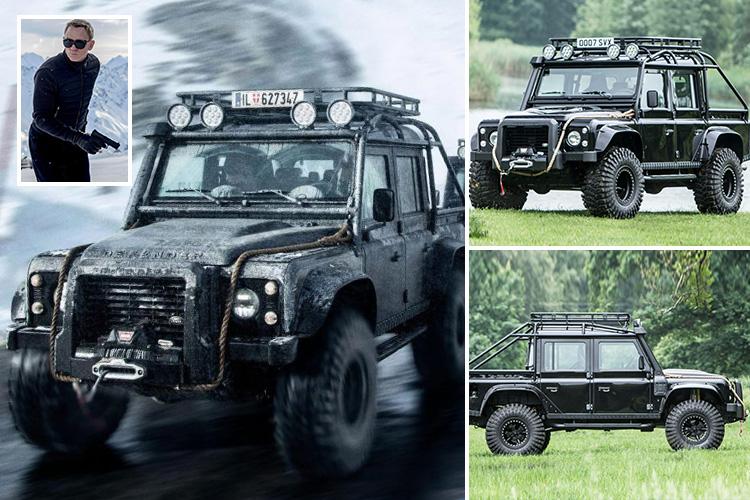 A CUSTOM Land Rover driven by James Bond in Spectre has been tipped to sell for £250,000.

Piloted by Daniel Craig in the hit film, the motor was part of a high-speed chase through a snowy Austrian mountain range.

Bond attempts to flee a number of gunmen working on behalf of Spectre, the criminal organisation led by Ernst Blofeld.

The huge 4×4 Land Rover Defender, that weighs 2.5 tonnes is a far cry from the classic Aston Martin DB5s usually associated with the famous spy.

The 8ft tall motor has specialist off-road tyres, an external roll cage and a winch.

And the motor even has a custom “0007 SVX” registration plate, adding to its value as serious Bond memorabilia.

The Defender has emerged for sale with Bonhams, and will go under the hammer at their Goodwood Racecourse sale on July 13.

According to the auction house, it remains in pristine condition, having barely been used since the film was released in 2014.

Just one other Defender was used in the film and that was badly damaged.

A spokesman for auctioneers Bonhams said: “This really is a fantastic car which remains in excellent condition, although there are a few filming marks on the bonnet from stunts.

“Just two cars, including this one used for the film, with the other heavily damaged. It has not been with its current vendor for long and has done very few miles.

“The car has been given a striking transformation specifically for Bond, which includes huge 37in all-terrain tyres, which have given the Spectre Defender the nickname ‘Bigfoot’.

more impressive motors up for sale

“Built to racing specification, it has customised suspension and rally dampers. The interior features Recaro seats with four-point harnesses, while the full roll cage runs both internally and externally.

“The engine too has been significantly upgraded, producing 185bhp which is up from the stock 120bhp.

“This is a great car for any Bond fan keen to get their hands on something truly unique.”