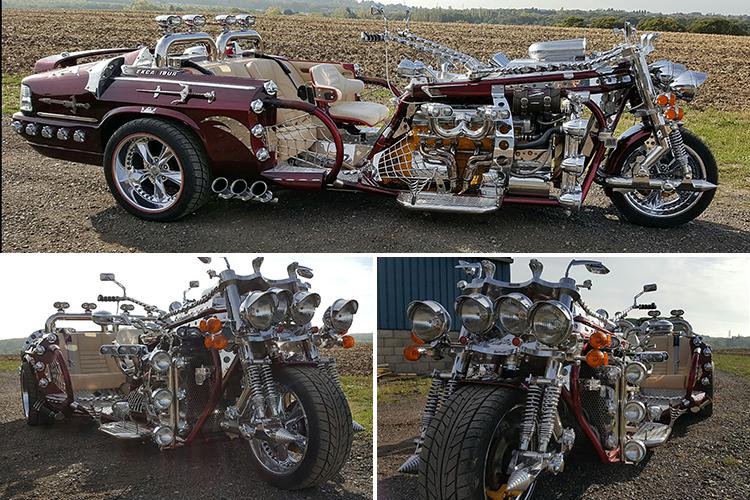 A THREE-WHEELED monster car-motorbike hybrid built by an enthusiast who spent £50,000 and 4,000 hours crafting the unique dream machine is going up for auction.

The Mad Max-style Jike Trike – which is road legal – is the only one of its kind in the world after a British motorcycle enthusiast created it in 2012.

The 18ft long trike, which has a front and two backseats, was created from the body of a 1992 Jaguar XJS by an engineer from Cheshire.

It is powered by a 12 cylinder 5.3 litre V12 300 brake horse power Jaguar XJS engine which is on display for all to see and in theory could do 150mph.

The Jaguar’s back end was lifted to create the rear of the trike and its wide Chip Foose wheels, which are needed to support its massive frame, were imported from the US.

The trike’s frame was hand made and other than the lights and mirrors all the shiny metal work is hand cut, shaped and polished stainless steel.

The original owner hired out the noisy red trike, which has done more than 70,000 miles, for special events like proms and weddings.

It even appeared on display at the NEC classic car show in Birmingham, causing quite a stir.

But he was forced to sell it in 2015 after moving to a new house which didn’t have enough room to park it.

It is now being sold by the current owner at Essex Classic Car Auctions for a pre-sale estimate of £30,000.

Its current owner is a retired businessman from Surrey with a love of quirky automobiles.

Auctioneer Graham Streeter said: “It is the only one in the world, the ultimate toy.

“The current owner just bought it as a toy and like all toys he’s been there and done it and had his fun so he has decided to move it on.

“Some people spend millions of pounds on a Ferrari, he bought this trike and it’s usable.

“The original owner used to hire it out for weddings. You have to see it in the flesh to believe it.

“I liken looking at it as sitting too close to the cinema. You need to step back to take it all in.

“It’s 18ft long and with the engine it’s got in theory it could go at 150mph, although I wouldn’t want to go at that speed in it.

“You have to look at it three or four times to appreciate every different part of it.

“This is the culmination of one man’s obsession to build something different from the rest of the world. It is a feat of British engineering.”