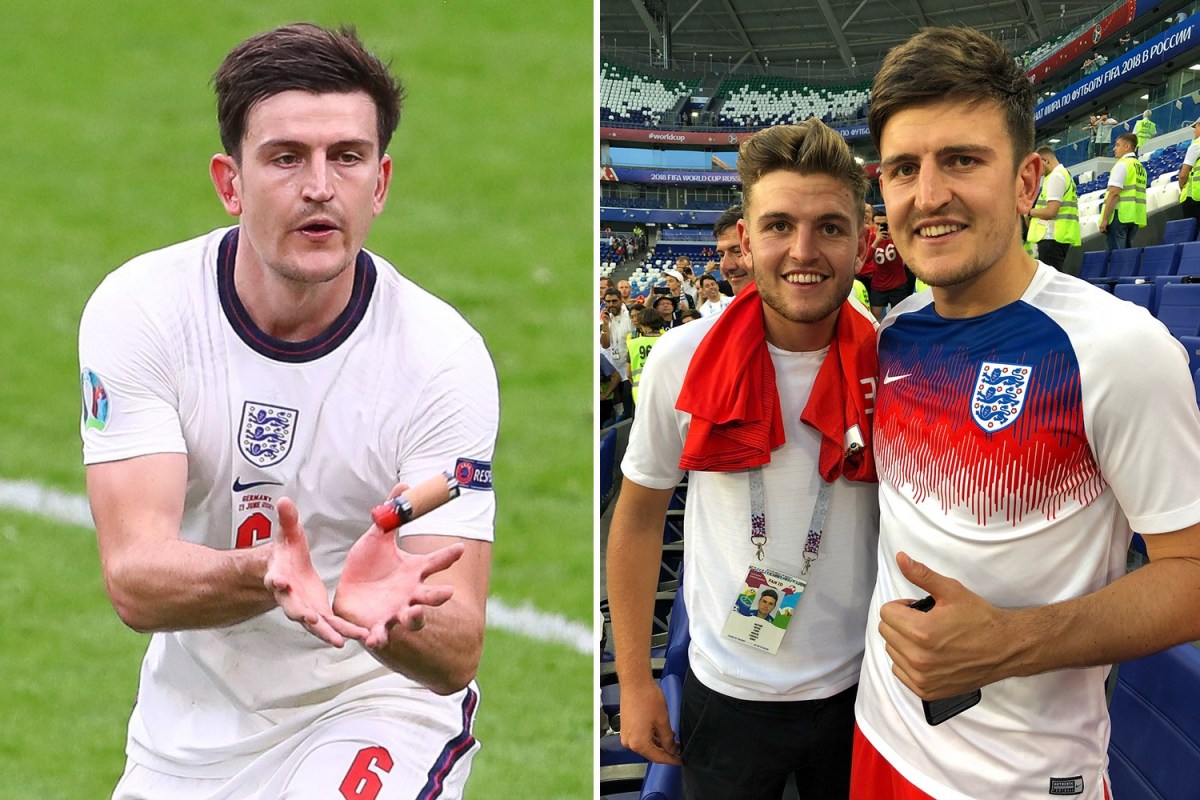 HARRY MAGUIRE’S biggest armchair fan during England’s clash with Ukraine is likely to be his younger brother Laurence.

Covid restrictions mean the Chesterfield defender – who also plays for the Three Lions C team – will have to watch his older sibling anxiously from home this evening.

The Derbyshire Times reports members of the Man United skipper’s family have been unable to travel to Rome’s Stadio Olimpico – the venue of England’s quarter-final duel.

It is far cry from when Laurence travelled to Russia to cheer on Harry’s exploits at the 2018 World Cup, where England lost Croatia in the semi-finals.

And the Maguire family will be eagerly supporting the Red Devils centre-back, 28, who is targeting the first Euros semis for the Three Lions since 1996.

Laurence told the Derbyshire Times: “We are having a bit of a gathering tonight with family and friends so hopefully we will be jumping around later on

“It is a disappointment that we can’t be out there. Without Covid we would have all been there.

“It is disappointing because you always want to follow him wherever he is playing, especially in the quarter-final of a major tournament.”

Laurence, 24, who was born in Sheffield, is a product of Chesterfield FC’s academy.

The player made his first-team debut for the fifth tier National League outfit in a 2-1 EFL Trophy win against Wolverhampton Wanderers reserves in 2016.

The versatile centre-back, who can also play as a defensive midfielder, is a member of England’s c-team, a national side made up of non-league footballers.

And the player, who is the youngest of three Maguire brothers admitted to being anxious watching older sibling Harry and his team-mates defeat Germany 2-0.

Laurence added: “A lot of the time I get nervous watching him but particularly this tournament.

“In the Germany game, the first 10-15 minutes, I could not really watch him, my stomach was turning.

“I always watch every movement that he does, every kick he takes, I am watching.

“It is like today, I have woken up this morning with butterflies, nerves, a little bit of excitement as well, but hopefully come 10pm tonight we are all jumping for joy.”

Laurence is reported to chat to Harry and his oldest brother Joe, 29, on the phone on a regular basis.

And the Derbyshire Times says the youngest Maguire brother will be sending the Red Devils captain Harry a good luck message via text.

The former Leicester City ace, who recovered from an ankle injury during the tournament, put in an impressive defensive shift during his side’s win against Germany.

And the victory saw the Man United ace and his Three Lions team-mates set up their duel with Andriy Schevchenko’s Ukraine.

Spireites centre-back Laurence said: “He is a massive inspiration to me.

“To have someone in your family doing so well in football, and with me playing football as well, it makes a big difference.

“He has been really good with me, every time I play he gives me feedback, he texts me, rings me, what I can do better, what I have been good at.

“It is a big inspiration for me to try and play at the highest level as you can. We are all so proud of what he is doing.”

Maguire, who has 34 England international caps, began his senior playing career at Sheffield United in 2011 before moving to Hull in 2014.

And there he made 76 appearances across all competitions over a two-season stint.

The player would later become the world’s most expensive defender after sealing a sensational £85million six-year move to Man United from the Foxes in August 2019.

And his brother hopes to see Harry achieve glory at this year’s Euros.

The Chesterfield ace added: “It would be unbelievable.

“Obviously to see something like that happen would be a bit surreal, to be honest.

“But I am not really thinking about that right now.

“I want him to have a good game tonight, hopefully, win, and I think if we win tonight we can start dreaming and thinking about him getting his hands on the trophy and the big celebrations which will happen in England.”