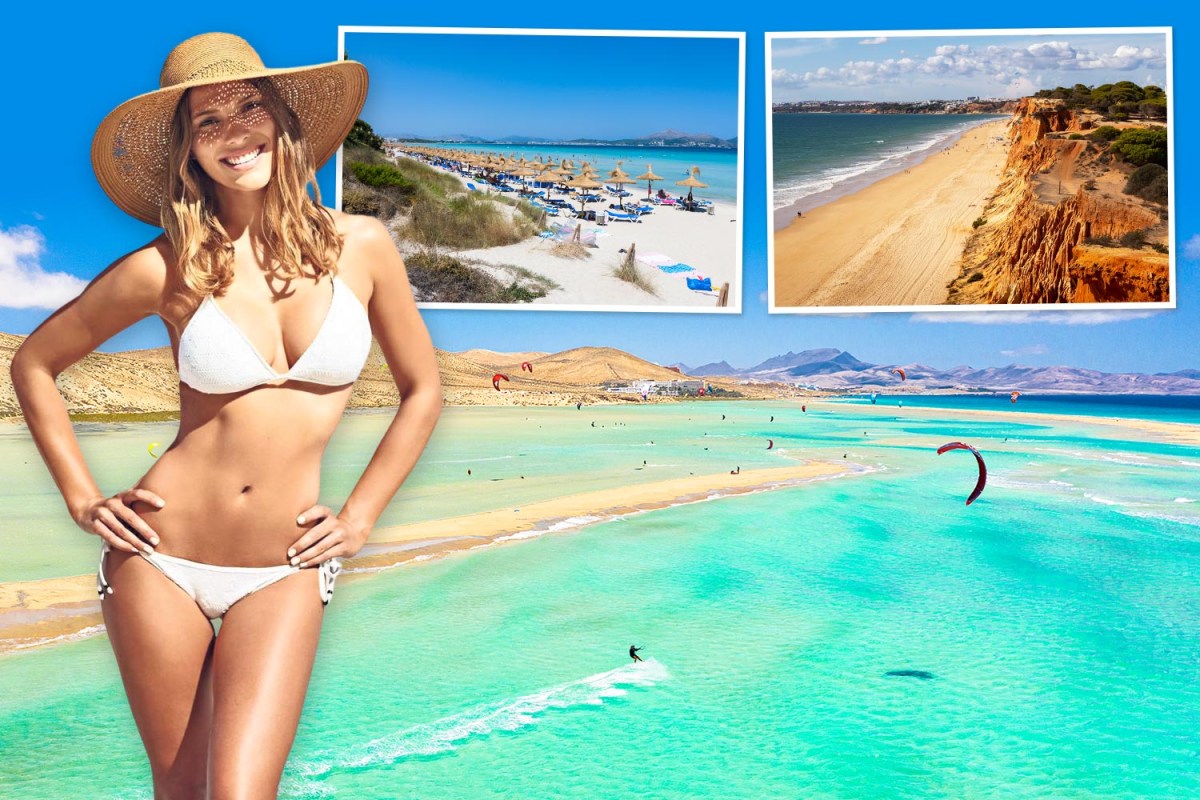 IF life’s a beach for you then read on.

Tripadvisor’s Christine Maguire said: “A perfect day at the beach looks different from one person to the next.

“It came together from the millions of travellers all over the world reviewing their favourite beaches on Tripadvisor throughout 2021.”

Lisa Minot looks at Europe’s most alluring beaches and costal stretches, and comes up with the best deals to take you to them in 2022.

This gorgeous beach is the best on the tiny island of Lampedusa, one of the Pelagie Islands in the Mediterranean off the coast of Sicily.

The clear, shallow waters are a fabulous turquoise colour and the sands dazzling white.

With no direct flights from the UK to the island, the best way to explore it is on a boat day trip from Porto Empedocle, Sicily.

GO: Seven nights’ B&B at the 4H Grand Hotel Mose is from £359pp including British Airways flights from Gatwick in July and 23kg of luggage

Book by March 13 at ba.com/sicily.

Some areas have lifeguards and there is a long jetty to board boats for tours.

The beach is backed by bars, restaurants and hotels and there are decent facilities including toilets and lounger/parasol hire.

GO: Seven nights’ half-board at the Iberostar Playa de Muro is from £469pp including BA flights from Heathrow on select dates in May and 23kg luggage.

Book by February 28 at britishairways.com/palma.

The Algarve is rightly known for its fabulous beaches and this is one of the best, a vast stretch of clean sands backed by rugged red cliffs six kilometres from Vilamoura in the east to Olhos de Agua in the west.

The waters are clear and at low tide you can see locals collecting small clams.

GO: A week’s B&B at the 4H PortoBay Falesia overlooking the beach is from £336pp including flights departing Manchester on March 31.

Calm, clear waters in this sheltered cove and fine white sands make this one of the finest beaches on the island.

Shallow waters make it perfect for families and you can even walk out to a tiny island just off shore.

Sunbeds and parasols are for hire from 2.5 Euros.

And the beach itself is backed by palm trees and a number of buzzing bars and restaurants.

GO: Seven nights’ all-inclusive at the 5H TUI Blue Atlantica Aeneas Resort is from £719pp, based on two adults and two children sharing and including flights and transfers from Gatwick on June 16.

Largely unspoiled and secluded, for the most part, you will not find sun loungers or beach bars – just miles of fine, light and windswept sands with clear blue waters.

GO: Seven nights’ B&B at the 4* SBH Costa Calma Palace is from £413pp including flights from Stansted on June 14.

Or go all-inclusive with seven nights at the SBH Costa Calm Beach from £425pp.

With dazzling white sands that would not look out of place along the Indian Ocean, this stunning lagoon features turquoise water and rocky outcrops.

The sea is shallow and warm, making it ideal for children, while the sand is a delicate pink in places, similar to the Seychelles.

The easiest way to get there is on a boat trip from Kissamos.

GO: Seven nights’ B&B at the 5H Avra Imperial Hotel in Kolymbari is from £519pp including flights from Leeds Bradford on May 1, 22kg luggage allowance and transfers.

On a good day, this beach compares to the very best in the Caribbean, with miles of white sand and stunning green-blue waters.

It is backed by dunes and on the horizon you can spot Taransay, famous for being the setting of the BBC hit show Castaway.

GO: Two nights’ B&B at the Hotel Hebrides is from £360 in total, based on two sharing.

The hotel is a 20-minute drive from Luskentyre beach and you can fly to Stornoway or Barra and pick up a rental vehicle via Car Hire Hebrides.

The majestic Bamburgh Castle towers over this wide expanse of pristine sands, backed by dunes.

It’s perfect for windswept walks at any time of year.

The north end of the beach has rock pools and a lighthouse.

GO: Just four miles from Bamburgh Beach is Cragside Townhouse in the pretty village of Belford.

After your day out, relax in the hot tub.

From £114pp per week. See cottagesinnorthumberland.co.uk.

Surrounded by rocky outcrops, this small but perfectly formed beach sits alongside seas of astonishing blue intensity and with some of the clearest waters you’ll ever see.

Ideal for those who enjoy snorkelling and diving, it’s a bit of a hike across the cove’s rugged cliffs to access the beach – but it’s well worth the effort.

GO: Get to Isola by a 30-minute ferry ride from Trapani in Sicily.

Four nights B&B at the 3H Palco Rooms and Suites in Palermo is from £625pp including flights from Gatwick on May 8 and private transfers.

This pretty cove is known for its striking rock formations and white volcanic cliffs that sparkle in the sun.

The beach has access to caves but you’ll need to swim there and it’s best explored on a boat tour.

With few UK operators selling holidays to Milos, one of the best routes to it is by cruise.

Departing May 7, the cruise is from £759pp all-in including all meals, drinks and two excursions.