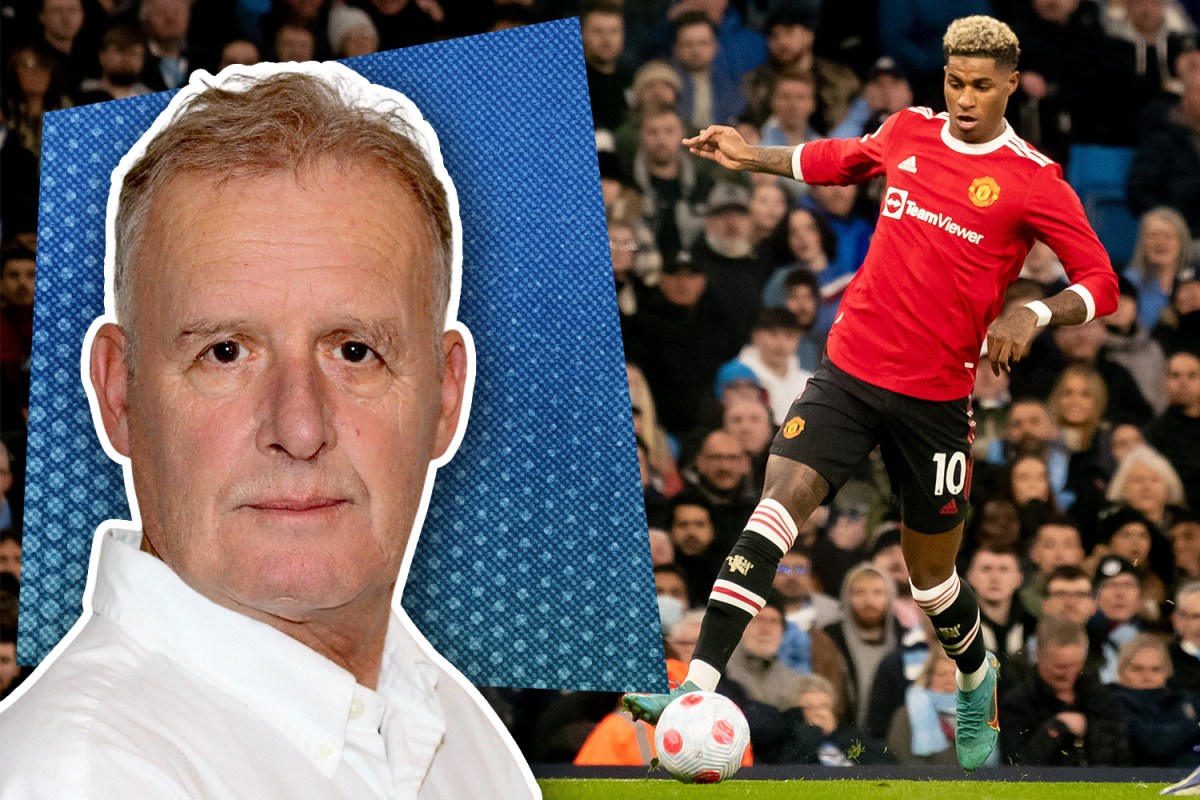 MARCUS RASHFORD needs an arm around the shoulder. Not selling.

Those who directed abuse at him after Manchester United surprised very few by tumbling out of the Champions League should be ashamed of themselves.

And there should be plenty more shame within Old Trafford if the club’s hierarchy allow him to walk away this summer.

For Rashford is one of their own, a Manchester lad, United through and through.

In raising over £20M for kids to eat free school meals during the pandemic through FareShare he gave the kind of pride to the Red Devils badge that money cannot buy.

Those who run the club talk about how the finances are flying through digitisation, shirt sales, sponsorship deals – even when the team is falling through the floor.

The real pride of United should be in seeing one of their own stand up for those who have little or nothing.

The striker responded after a video was posted on social media, the film alleging that he had used his middle finger towards supporters lined up outside Old Trafford after the 1–0 defeat by Atletico Madrid.

He posted on Twitter: “A video can paint a thousand words and in this case lead to inaccurate info being shared on social media. Guys for weeks I’ve been heckled, threatened, questioned and last night my emotion got the better of me. I’m a human being. Reading and hearing that stuff about yourself every day it wears you down.

“No one is more critical of my performance than me. But what you see in this video lacks context. I had been heckled from the minute I stepped foot outside the ground, abuse not just aimed at my football.”

Rashford’s football should be questioned to be fair.

He scored 21 goals last season but has just five in this campaign and such has been his disillusionment over bit–part performances, lack of game time and his own lack of form that he is thinking about moving on.

Yet he was not helped in that he was plagued with shoulder problems long before he finally had surgery last August.

Either he decided to soldier on or Ole Gunnar Solskjaer decided to let him continue to play through pain. Or both.

Either way he didn’t get back until October and by then Solskjaer was on the way to the sack although Cristiano Ronaldo was back and scoring plenty at the time.

Space also had to be made for Jadon Sancho and Edinson Cavani.

Rashford felt the squeeze and he never got back the electrifying zing that once made him a hero on the pitch.

He was adored, remember, by supporters –  as opposed to small – minded individuals intent on claiming their five minutes of social media fame through supposed outrage.

Ironically it is his work as a hero figure for children, the days and hours he spent fighting for the poor and taking on Boris Johnson, that will surely have cost him.

Rashford was awarded the MBE and was named top of the Sunday Times giving list for work that ennobled him and shined the light of humanity on his fellow professionals and his club.

But Rashford, a sensitive and extremely aware young man who knew all about poverty growing up in the vast council estate of Wythenshawe, is bound to have been emotionally affected by that charity work.

Whether Solskjaer, his coaches or the club in general recognised the side – effects of the striker immersing himself in the knowledge of hurt and deprivation of so many is another thing.

Perhaps he didn’t feel he needed any special support himself through that time.

Marcus Rashford is a brave lad with a heart of gold so chances are he thought of everyone else but himself.

Now he needs help and out-going Ralf Rangnick, nor his staff, seem from the outside capable of providing it.

There has been something of the German in the past weeks that suggests he is washing his hands of the dirty job he was asked to take on but one that on so many levels he was not qualified to do.

United legend Paul Scholes, indeed, declared in the wake of that last-16 Champions League exit that he wouldn’t have given Rangnick the job for ‘six games never mind six months’.

Rashford has become collateral damage within the debris of the Theatre of Dreams – a place that has been falling apart in more ways than one for almost nine years since Sir Alex Ferguson retired.

The 24 year old is three short of 300 appearances after bursting onto the scene with two goals on his debut in a 5-1 Europa League win over Midtjylland.

There have been 91 more since although yes, he should have scored more and sometimes in front of goal his indecision has been final and maddening.

But he is a true talent who has simply lost his way within a club that has nowhere left to run.

Arsenal legend Ian Wright has displayed righteous indignation of the treatment that made Rashford snap, furious that he felt the need to suggest any kind of apology.

Wrighty posted : ‘Marcus, stand your ground bro. Tell them about their raasclaat self yes? “You know what I mean – you’ve got these people jumping on ‘Oh Marcus is so sorry’ – don’t be f****** sorry for that bro. Some of them fans love giving it and they can’t take it man.

“You just do your stuff and get back to where you need to be bro on your playing. F*** them fans bro. Everybody, have a nice day.”

It’s been a long time since Rashford had a nice day and now he is off on a break – tormented, troubled, the cowards who condemn him no doubt hoping he is guilt tripping as well.

There should certainly be some guilt within Old Trafford for sure for Rashford is a living example of how to ruin a wonderful, natural talent.