MMA prodigy Raul Rosas Jr looks set to make history on Tuesday evening when he becomes the youngest ever fighter in UFC history.

The 17-year-old, who boasts the same “Problem Child” nickname as YouTuber turned boxer Jake Paul, is already 5-0 as a professional having proven himself on Ultimate Warrior Challenge shows.

But now he is preparing to make his UFC debut in Las Vegas when he takes on 25-year-old Mando Gutierrez in the latest edition of Dana White’s Contender Series.

It has not been straightforward for Rosas Jr, though, as he was forced to secure a special licence because of his age.

That licence is expected to be confirmed by the Nevada Athletic Commission later today.

And he will then be free to break the age record previously held by Chase Hooper – who signed for the company at 19. 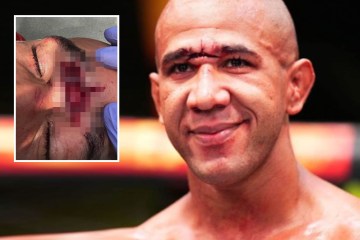 Rosas, who is set to earn a full UFC contract should he beat Gutierrez, has slammed those who do not believe a 17-year-old should be competing against men.

Speaking to MMA Junkie, he said: “Those people don’t know much about fighting in my opinion,” Rosas said.

“To all those haters, I don’t really care. They can say whatever they want.”

Rosas’ incredibly quick rise in the MMA world came off the back of him beating men twice his age.

He consistently proved age was no barrier as he turned pro and began winning against fighters with heaps more experience.

He added: “I was 15 when I started my amateur career.

“Since it was an Indian area, it was mostly up to the promoter. We ended up convincing him and he ended up giving me the opportunity to fight on his card.”

Rosas may be a teenager, but he has already set himself the goal of becoming the youngest ever UFC champion.

That record is currently held by Jon Jones – who won the light-heavyweight title at 23.

But Rosas said: “The goal is that UFC title and to become the youngest UFC champion.

“I just want that contract to be able to get a step closer to my dream.”

THE National Lottery Set For Life numbers are...
Football

IF you’re English or you’re Welsh, the result...
News

PROPAGANDA and misinformation are difficult to sift through...
Business

SUPPLIERS have been warned about hiking direct debits...

THE National Lottery Set For Life numbers are...
Football

IF you’re English or you’re Welsh, the result...
News

PROPAGANDA and misinformation are difficult to sift through...
Business

SUPPLIERS have been warned about hiking direct debits...
News

THE National Lottery Set For Life numbers are in and it's time to find out if you've won the top prize of £10,000...
Read more

IF you’re English or you’re Welsh, the result of tonight’s match will be straightforward for you. It’ll either be great, or terrible. But what...
Read more

PROPAGANDA and misinformation are difficult to sift through during the growing digital age. Conspiracy theories regarding the validity of paid actors staged during crises...
Read more