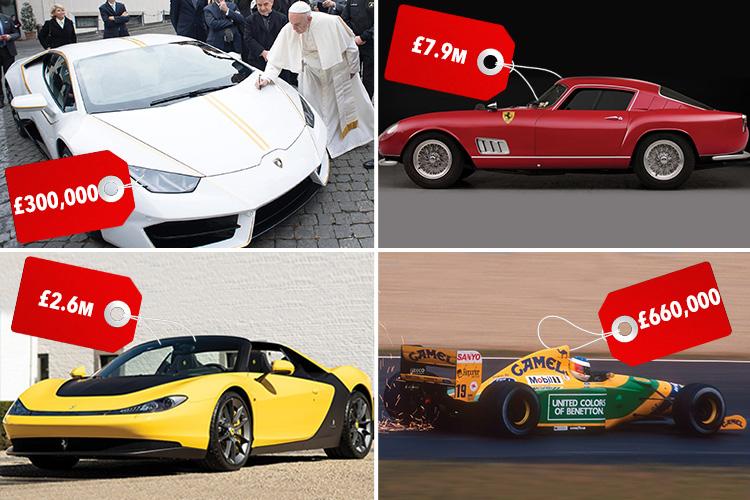 ONE of the greatest ever collection of cars heads to auction next month including Michael Schumacher’s F1 car, 25 Ferraris and the Pope’s Lamborghini.

It dominated motorsport in the late 50s and just 72 were ever built making this example a prize among collectors.

It’s one of just 25 Ferraris on sale on May 12 – plus other Prancing Horse memorabilia.

Built to honour the death of the great Sergio Pininfarina, just six of the special edition Sergio’s were ever built, each based on the Ferrari 458.

Elsewhere in the auction catalogue is a 1992 F1 car raced by Michael Schumacher – the first to ever link the German legend and design ace Ross Brawn together.

Just a few years before he dominated the sport, Schumi started his career at Benetton and this model helped him finish second to Nigel Mansell in the 1992 Spanish Grand Prix.

Expected to shift for £660,000, the car was moved to spare car duties after Spain meaning it was never damaged and remains in immaculate condition.

One of the rarest Lamborghini’s ever is on sale, too. The 2018 Lamborghini Huracán was donated to Pope Francis with a special papal paint job.

Listed for just over £300,000, the profits of the supercar auction will be sent to charities around the world.

The stunning motors don’t stop there, with a highly sought-after £1.5million 1973 Porsche 911 Carrera RS going under the hammer.

One of the rare “lightweight” models, it was owned by Finnish rally ace Leo Kinnunen and has done just 40,000 miles in 45 years.

Other highlights of the RM Sotheby’s auction include a £1.3million Bugatti Veyron 16.4 Grand Sport Vitesse – one of the last ever Veyrons to roll out the factory, and it’s painted with a one-off Transformers livery.

Plus memorabilia like Steve McQueen’s outfit and helmet from the classic Le Mans movie and Ayrton Senna’s 1987 F1 race suit from his first ever Monaco win.