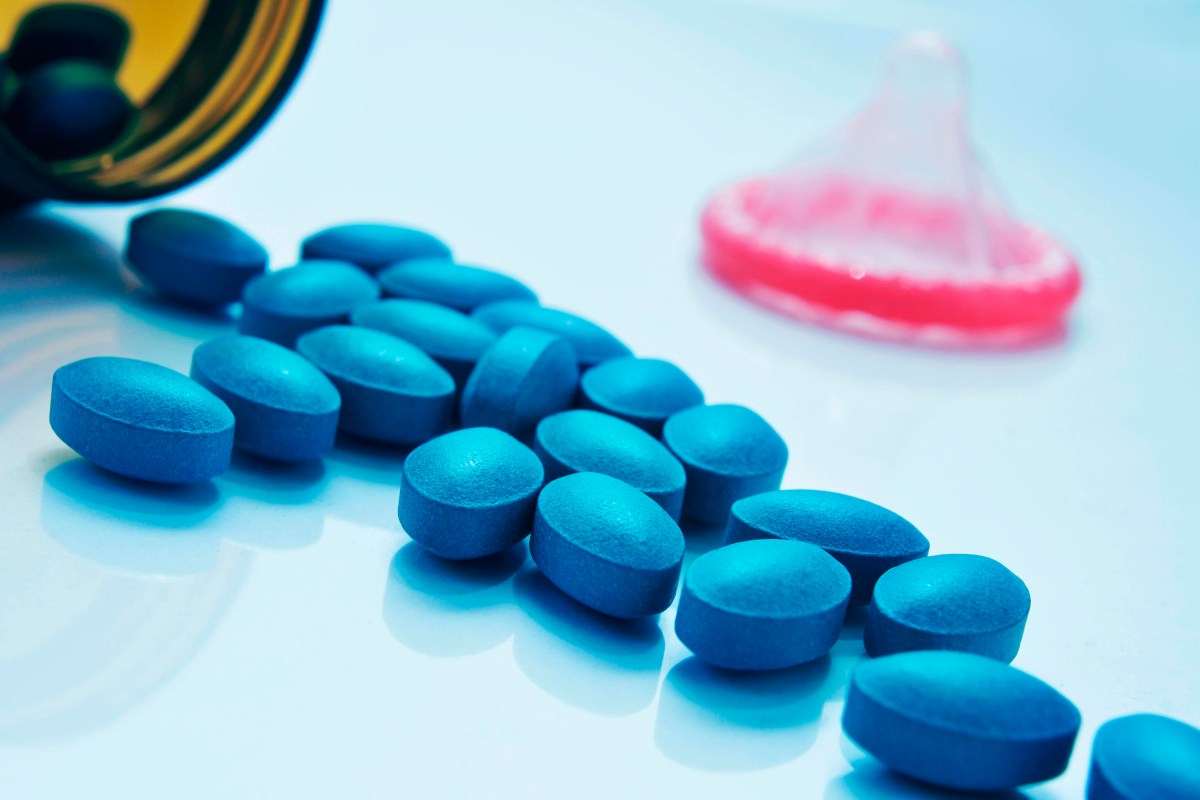 IT’S the wonder pill for millions of men struggling to “get it up”.

Within half an hour of taking Viagra, men can jump back into the bedroom with confidence everything will be in working order.

Viagra is used to treat erectile dysfunction (ED) – something that affects men of every age but is more common in older men.

It is estimated that half of all men between the ages of 40 and 70 will have ED to some degree. It is defined as the inability to get and maintain an erection.

Since its debut in 1998, Viagra has enabled millions of men to take control of their sex life and allow for a little more action in the bedroom.

While free for some on the NHS, Viagra became available without a prescription in the UK over the counter for the first time in 2018, making it even more accessible.

Viagra was originally discovered by the drug manufacturer Pfizer. It contains the ingredient sildenafil, which is used in various other ED medicines.

The little blue pill can help more than two-thirds of men who take it.

It’s also shown promise as a medicine for the heart, having shown to strongly suppress abnormal heart rhythms and prolong the life of heart attack survivors.

For ED, Viagra may seem like the miracle cure.

But it’s not for everyone. The NHS says that men taking medicines called nitrates for chest pain should avoid Viagra.

It should also not be taken by men who have recently had a heart attack or stroke, or who have a serious heart or liver problem, low blood pressure, or a rare inherited disease.

It’s also important to know that side effects including headaches, a stuffy nose, and a temporary change in the colour of your vision, are common, affecting around one in 100 men.

How does Viagra work?

An erection occurs when a protein called cyclic guanosine monophosphate (cGMP) is released.

cGMP causes the walls of blood vessels to relax, allowing a rush of blood to flow into the penis, making it go hard.

In people having trouble with erections, PDE-5 may work too quickly.

Viagra works by blocking the PDE-5 from working. It binds to PDE-5 so that it is unable to break cGMP down.

That way, the penis stays hard.

Evidence shows that men looking to improve their sexual performance are, generally, satisfied with the results they get with Viagra.

According to Superdrug Online Doctor, a study of nearly 4,000 men with ED who were treated with Viagra found a clear increase in the firmness of erections.

Prior to taking Viagra, 58.7 per cent of men reported an erection hardness score of only one or two, considered insufficient for penetration.

However, after four weeks of treatment, 96.3 per cent found they were able to obtain erections of hardness grade three or four. Some 63.6 per cent achieved grade four erections, the highest possible firmness.

Without Viagra, a majority of these men would have had great difficulty having sex.

You may still have some questions about using Viagra, such as how fast does it work and how long does it last in the body?

Superdrug Online Doctor created a timeline of how the drug works, so you know what effects you can expect in the minutes and hours after taking it.

It says that, although Viagra’s manufacturers advise taking the pill one hour before sex, it may work much sooner than that.

Some men in studies have reported being able to have sex just 12 minutes after taking Viagra.

And, while the maximum concentration of the drug isn’t reached until about an hour after taking it, the average time it took men to get an erection was 27 minutes.

Here is what happens step by step.

The drug is rapidly absorbed by the body. Some men can get an erection within 12 minutes.

Viagra makes its way into the body’s blood vessels, which will lead to an erection over time.

A man has to be sexually aroused for Viagra to work – it is not what it looks like in comedy sketches.

This is the average amount of time it takes for men to get an erection after taking Viagra, according to Superdrug.

A study in the British Journal of Clinical Pharmacology found it took men with ED 12 to 70 minutes to get an erection once they had taken Viagra.

The middle ground was about 27 minutes for most men in the study.

Viagra reaches its peak effect within an hour of being taken.

At this point it reaches its highest blood saturation, which is why medics recommend men take it an hour before they want to have sex.

It may be delayed by an hour or so, though, if it is taken with food.

But just how long will the erection last?

A study in the Journal of Sexual Medicine found that men could hold an erection for an average of 33 minutes an hour after taking the little blue pill.

In the same study, men who took a placebo were only able to maintain an erection for seven minutes.

By four hours, the half life of Viagra has been reached meaning there is only half as much present in the blood as there was an hour after taking it.

A warning on the drug says “if you experience an erection lasting longer than four hours” you should seek medical advice – but this may cause confusion for some.

This only applies if a man has experienced a four hour long, continuous erection.

Many men think they cannot have sex four hours after taking Viagra, but that is a misconception, Superdrug says. They can still go on to try and have sex, even if half the drug has worn off.

You may think that the drug has all but left your system – but it hasn’t.

A man can still get an erection 10 hours after taking the drug with the same stiffness as an hour or two after taking it.

Even 12 hours later, men can still get an erection, but average duration begins to decrease.

As found in the study in the Journal of Sexual Medicine, the ability to get an erection does not decrease, just the amount of time a man can maintain an erection.

By now, most of the traces are gone from the bloodstream.

It is recommended that men do not take more than one does of Viagra in a 24-hour period.

Taking too much sildenafil by accident can cause unpleasant side effects, such as altered vision, dizziness and a blocked nose.

If Viagra doesn’t sound like it is the right option for you, there are plenty of other impotency solutions on the market.

Similar medications like Cialis, Levitra, and Spedra have debuted as ED drugs to help men with impotency.

But some studies still found Viagra has a greater impact.