A MUM was fatally savaged by a great white shark while paddling in waist deep water just metres from her horrified family.

Kimon Bisogno, 39, was taking a weekend away with the “love-of-her-life” Diego Milesi, 40, and her daughter Luna, 5, on the sun-kissed beach in South Africa.

She went into the water for an early morning dip and was said to be only waist deep when the shark attacked through a wave.

Desperate call went out to the local lifeboat for help but it was too dangerous for locals to go in.

The inshore craft from the National Sea Rescue Institute was launched and found Kimon’s blood-soaked body floating in the surf about 50 yards out from where she was attacked. 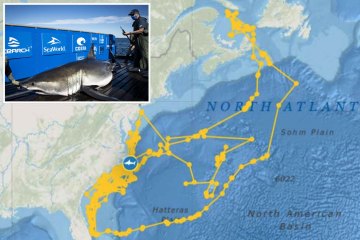 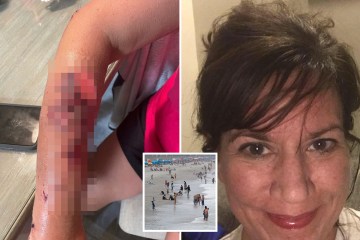 The instant attack was so brutal that nothing could be done to save the mum as the lifeboat men pulled her badly bitten body from the sea onto a stretcher and returned to base.

Her body was handed over to the police and forensic pathologists will carry out a post mortem before an inquest will be held.

Her devastated family have been offered trauma counselling.

Normally great white shark victims die quickly of blood loss when their arteries are severed by the razor-sharp teeth – with many suffering from heart attacks.

It was the second death in the same idyllic resort in just three months and the third in 11 years and the beach was closed down and shark warning signs erected.

The family had driven 300 miles from their home in Cape Town to the luxury Beacon Isle hotel complex in Plettenberg Bay for three days after rebuilding their pizza business after Covid.

The Bitou Municipality which oversees the beach has shut down the Bay and put up shark signs and posted lifeguards to keep tourists out of the water.

Kimon – know to friends as Kiki – was the third to be killed by a great white shark there in 11 years.

In June, stockbroker and married dad Bruce Wolov who was an acclaimed long-distance swimmer and keen snorkeller was torn apart just off-shore.

And in 2011 local carpenter and keen surfer Tim Van Heerden was on his board when a great white shark attacked while he was waiting to catch a wave.

Bitou Municipality Mayor David Swart said: “We have never had a fatality until 2011 and now we have had three with two of those in the last three months.

“We are researching and looking at putting up a shark barrier and increased warning signage and start our lifeguard’s season a month earlier than usual.

“There seems to be no change in the shark’s behaviour in this area so it is a bit of a mystery why we have had three fatal attacks in such a short space of time.

She was such a perfect loving wife and mum – why her?

“Our thoughts go out to the woman and her family at this time” he said.

Great white sharks can grow up to 20 feet long and weigh 2 tonnes and have up to 300 razor sharp serrated teeth arranged in rows in its giant jaws.

The predator when attacking can swim at up to 35mph guided by an extremely powerful sense of smell and normally prey on seals, sea lions and dolphins.

Humans are often mistaken for seals especially when in wet suits and attacks are said by experts not to be intentional but “experimental” when biting.

They usually move away after biting once when they realise the human is not their natural prey but the damage done by just one shark bite is often fatal.

In the last 25 years 37 people have been killed in shark attacks off South Africa and going back as far as 1950 the figure rises 66 falling victim to their jaws.

Shark activity along the Garden Route from Port Elizabeth to Cape Town increases in winter due to the annual sardine run – an important food source.

South African Kimon met the love of her life Diego on holiday in Ibiza 13 years ago and they moved in together in her native Cape Town and five years ago had daughter Luna.

Diego said on a Facebook video: “Our love story goes back 13 years.I couldn’t speak English. You couldn’t speak Italian. But we connected through cooking”.

They set up the popular Ferdinando’s Pizza restaurant and takeaway in Cape Town but both were committed to helping out the less fortunate in life.

A close friend of the couple said: “They worked very hard and very long hours but both of them were very away of their social responsibilities to others.

“They helped run he Obs Pasta Kitchen which served up delicious and literally lifesaving meals to the poor and starving every Wednesday like clockwork.

“Both believed very much in saving the planet and were hippy types who saw the best in everyone and earning money was just a means to help others.

“They were blessed when Luna was born 5 years ago and were a perfect family and the news of her passing in such a way has just left us all in bits.

“She was such a perfect loving wife and mum – why her?” she said.

Last night close friend Carmin Commins said on Facebook: “I have scrolled through your page over and over again and hoping that it is a mistake.

“I don’t know how the world could let someone like you go too soon but what I do know is that anyone that you met you touched their life with your love.

“The world truly lost a bright shining light and pure soul who left happiness, laughter, glitter and kindness where ever you went.

“You were so genuine with so much love in your heart” she said.

“RIP Kimon – too good for this earth”.

EMMERDALE is set to welcome a very familiar...
News

BAFFLED cops pulled over a battered car on...
Travel

IT’S the end of October but I’m basking...

EMMERDALE is set to welcome a very familiar...
News

BAFFLED cops pulled over a battered car on...
Travel

IT’S the end of October but I’m basking...
Business

Six ways to keep warm for less using your microwave

LOOKING for ways to stay warm for less?...

EMMERDALE is set to welcome a very familiar face as Cain Dingle’s long-lost brother makes an explosive arrival in the village.  In upcoming scenes,...
Read more

SPOOKY images reveal an eerie site that resembles a Disney village filled with the remains of fairytale castles that have been left to...
Read more

BAFFLED cops pulled over a battered car on the motorway partly held together with tape, but the driver claimed he was on his...
Read more